When I imagine a “girdle” I generally reach for an image from the 19th or early 20th centuries. My image of Ancient Greek fashion is more based around loose-fitting robes, tunics, and dresses, rather than the later trend toward shape-wear.

And yet in Greek mythology, Hephaestus is said to have made a “golden girdle” for Aphrodite that significantly enhanced her already-enormous beauty.

When I search for images of “Ancient Greek girdles” they are mostly just ribbons or rope-belts around the waist, which seems too simple for what the myth is describing.

Are there any more detailed descriptions of this piece of mythological jewelry, or significant depictions in art or sculpture? Or are there similar items from the historical record that might serve as a decent analogue of what this magical item looked like?

Perhaps it wasn't even a girdle at all. In Homer's Iliad it is described as kestos himas poikilos, usually translated as "embroidened girdle", but it's useful to look at the verse in context:

There are two main interpretations for these verses regarding the meaning of κεστὸν: allegorical or referring to an actual garment.

In the allegorical interpretation, κεστὸν is said to mean the "chains of love", that govern how lovers behave in Il. I.194.3

Interpreting this verse referring to an actual garment poses some difficulty: ἱμάντα (himanta) is used elsewhere to refer to the chin-strap of a helmet (Il. 3.371, 3.375), or even more broadly any kind of strap (Il. 5.727, 22.397), and Aphrodite is said to ἀπὸ στήθεσφιν "loosen it from her chest" - this makes is unlikely to be a girdle as we think of.

A possible explanation is the use of κεστὸν to refer to Near-Eastern amulets or breast-pieces that also serve as love charms.

It thus seems more likely the garment in question described is closer to a ornamented bra than to a girdle.

Aphrodite's girdle isn't a "girdle" in the modern sense of a piece of clothing worn around the waist, but an article of clothing known as a strophion (στρόφιον), which is a bra-like garment made of cords or belts, designed to support a woman's breasts, worn either over-top or underneath the cloths. 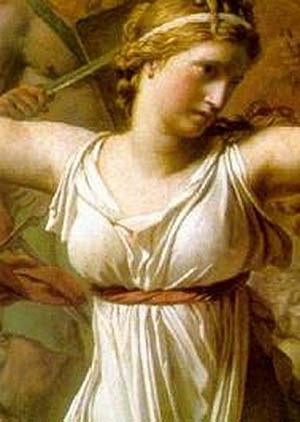 It is called a girdle, simply because it means "to gird" or "to give support to." It is described as kestón himanta poikílon (κεστὸν ἱμάντα ποικίλον), which means "artfully/ornately embroidered belt", in Iliad 14.214, which means that it isn't made from simple cords, but thicker bands of cloth, or belts.

It also seems to be saltire-shaped, or in the form of an X. Aphrodite's "girdle" is actually called the himas (ἱμᾰ́ς). So it most likely looked like two embroidered "belts" of gold, which crossed over one another between Aphrodite's breasts, with a third band that wrapped around her ribcage, just underneath her breasts.

There were most likely images of her retinue, the Erōtes, embroidered onto the belts of the himas, which gave it control over the various different types of love (Anteros, Eros, Hermaphroditos Himeros, Hedylogos, Hymenaios, and Pothos).

For more, see the "Magical Girdle of Aphrodite" chapter of the "Aphrodite Estate" article on Theoi.com

Not the answer you're looking for? Browse other questions tagged greek god-items aphrodite or ask your own question.

15
What did the Labyrinth look like?
6
What does "distributing by lot" mean among Apollo's epithets?
4
What power does Hera have over Zeus?
7
What is Clytemnestra's dowry? How does it compare to Helen's?
9
What did Achilles look like?
4
What were the magical powers of Freya's necklace Brísingamen?
0
What does Ulysses Pidytes of Percote mean?
2
What does Tiresias's answer to the gods mean?