Is there any surviving manuscript older than the 1st century CE that mentions the story of Danae being impregnated by Zeus's golden shower?

I know that the story is mentioned in:

Are there any extant manuscripts of the above, or of any other works, predating the 1st century CE, which mention the story of Danae being impregnated by a golden shower from Zeus?

The myth of Danae and the shower of gold appears on several vases dating back to the 5th century BC. See for example this krater: 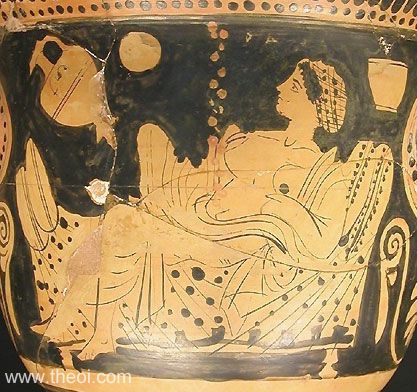 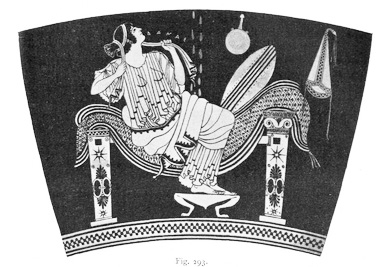 To dispel any doubt regarding which myth is portrayed on these vases, notice how in the second picture the female character is labelled "Danae". Also, the back of the same calyx depicts another scene from the same myth, namely the making of the wooden chest in which Danae and the newborn Perseus are thrown into the sea by Akrisios (also named on the vase).

According to Timothy Gantz (Early Greek Myth: A Guide to Literary and Artistic Sources, p. 302) both scenes appear often in 5th century vases, "with Danae frequently holding up her skirts to catch the rain".

Not the answer you're looking for? Browse other questions tagged greek zeus perseus or ask your own question.

7
Are there any studies of the historic phenomenon of the chief god of a pantheon being replaced by the storm god?
9
Is there a story that places the Amazons against Ares?
5
When Zeus impregnates Danae, what is the meaning of the shower being golden?
2
Are there any myths that prove Athena was the favorite daughter of Zeus?
3
Are there any gods or similar beings other than Nemesis that laid eggs?
4
Is there any truth to the claim that the original home of the Amazons was Sinope, not Themiscyra?
3
Is there any evidence of the Ancient Greeks worshipping Zeus's daughter Helen?
3
Is there any pre-modern attestation for Telephassa being a daughter of Nephele by the River Nile?