Is there an allegorical meaning associated with the destruction of Troy?

In many cases, a mythos can be seen as an allegory. For example, the biblical episode of Judith and Holofernes can be seen as the eradication of pride, accomplished at all costs, emphasizing the problem of superbia and the importance of its removing. The decapitation theme associated with the annihilation of pride can be also found in the Greek, Mesopotamian and even Kurdish tradition, and most likely in others I am not aware of.

Going back to my question after having defined what I am looking for, is there any allegorical reading of the destruction of Troy? That is, has any mythologist or philologist found any, so to speak, metaphysical (Aristoteles is turning in his tomb right now) interpretation of the leveling of the Dardan city?

Very early on the Greeks drew parallels between the Trojan War and the Persian War. Both involved Greeks coming together to defeat an eastern power; so naturally from that the latter took on characteristics of the former, and vice versa. Even before the Trojan War began, Greek and Trojan kings began to look like Achaemenid kings (see here, section 4.2 and image 11, which can be found on the right sidebar). But during the fifth century, the assimilation of specifically Trojans and Persians (i.e. Trojans in Persian trappings) was complete:

Attic black and red figure painters of the sixth and most of the fifth century persisted in depicting the Trojan in Hellenic dress indistinguishable fromthat of the Greeks...Paris furnishes some of the rare exceptions in the later sixth century by sometimes appearing in the costume of the "Scythian archers" so prevalent in Attic vase painting of this period.

[By] the end of the fifth and fourth centuries B.C., the depiction of the Trojans in Greek art had changed drastically; by then, they had assimilated the dress of Amazons or Persians. During this period Paris appears in vase painting almost exclusively as an oriental prince.

You can see an example here. Notice the different costumes of Aphrodite (tall, in the middle, wearing typical Greek dress) and the Trojans (Aeneas on the left, Paris on the right). 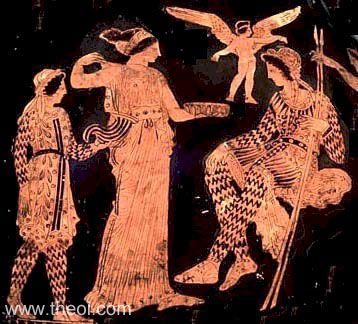 Many have seen the juxtaposition of Persian War scenes and Trojan War scenes on the Metopes of the Parthenon to indicate a symbolic relationship between the two (cf. e.g. A. Stewart 1990 Greek Sculpture: An Exploration, Yale Press, p. 250-252).

It is not surprising that Herodotus begins his narrative of the Persian War with a rationalized account of the Trojan.

While that's not technically allegory, there were others who did make the war fully allegorical. Lamberton in his Homer the Theologian (UC Press, 1989) notes that there seemed to be a general agreement that the Odyssey

would traditionally have been read as allegory, most often moral allegory.

Much of the allegorization came from a defense of Homer and the gods from attacks by the Platonists. Plato himself censured Homer in his Republic. In the first century CE, Heraclitus (not to be confused with the Pre-Socratic philosopher from the late sixth/early fifth century!) penned his Homeric Allegories. His work is primarily Euhemeristic, in that they're:

either physical allegories—claims that the poems represent forces or elements of the natural world as gods—or ethical ones that stress edifying concealed messages.

Picking up from the Platonic allegory, the Neo-Platonists developed Homer's Trojan War into an allegory of the soul (which is, after all, what the Utopian Republic is really all about). I quote Anne Sheppard's Studies on the 5th and 6th Essays of Proclus' Commentary on the Republic (pp. 40–41):

Proclus and Syrianus allegorised Homer in metaphysical and theological terms and sought to show the harmony between poetry, religion and philosophy. As a result myths, including Homeric myths, do make tantalisingly brief appearances in Syrianus' commentary.

There are good grounds for thinking that systemic allegory of Homer in terms of transcendent metaphysical entities was first developed by Syrianus. Writers like Philo and Origen occasionally allegorise Biblical persons and events in terms of metaphysics; Porphyry's De antro nympharum uses Neoplatonist concepts in its interpretation of the grotto in Od. 13 [i.e. Homer's Odyssey book 13 - CW] and refers to a full-scale allegory of the Odyssey by Numenius in terms of the journey of the soul; but nowhere before Proclus and Syrianus is there a detailed and systematic application of the Homeric myths to the sphere of transcendent metaphysics.

Sheppard gives several examples of allegorising, such as "Zeus and Hera representing the monad and the dyad" (for what that is, see this), of which there is a very nice discussion in Sheppard's book, and the death of the twelve captives by Achilles as symbolizing the demiurge. Other examples in Proclus include the Judgment of Paris, where he makes the choosing of the goddesses an allegory for different lifestyles:

One further thing of note, Proclus most certainly thinks that Homer himself is allegorizing, and that as a poet, he is simultaneously crafting both layers, the plain meaning and the allegory.

The classicist W.F. Jackson Knight, much influenced by the Cambridge school, saw in the sack of Troy an allegory for ritual defloration. See his book Vergil, Epic and Anthropology.

9
Are there any negative connotations associated with the Caduceus?
6
Was Helen of Troy in Egypt during the war?
5
Why is the virgin goddess Artemis associated with childbirth?
6
What is the meaning of Hercules' self-immolation?
7
Destruction of the universe by fire in the Ancient Greek canon?
4
What/Which minor gods/spirits are associated with Dionysus?
5
What is the story of Eurymedon, the giant king who brought destruction on his people?
7
Is there a referenced kill-count for Hector of Troy?
4
Who in Greek mythology is associated with natural disasters?