What bird species is associated with Pallas Athēnē?

The english Wikipedia article about the bird Athene noctua (called little owl in English) claims, without references, that in Greek mythology, the godess Pallas Athēnē was associated with that bird. But this claim seems odd to me.

There are two Athenian coins, the tetradrachm and the dekadrachm that depict an owl on one side, and the helmeted head of Athena on the other side. Here are three photos of them. 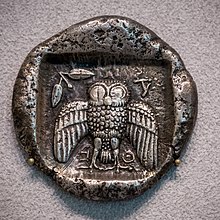 Both of these coins depict the owl with big circular markings around there eyes. That makes them look to me like it's supposed to depict Strix aluco (called tawny owl in English), whose face looks like that in reality. (Alternately it could depict Strix uralensis; there are a lot of owl species if you're not an entomologist.)

Here is a pair of Stirx aluco and an Athene noctua for reference. 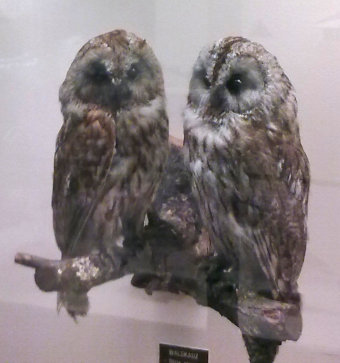 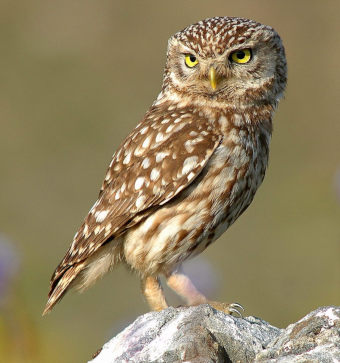 So my question is, what bird species was actually associated with Pallas Athēnē in Greek mythology? I would prefer an answer that applies to before the Roman empire if possible.

This question was inspired by a previous question about Athēnē.

The animal that is commonly associated with Athena is the γλαῦξ (glaux), which is often translated simply as 'owl', but actually refers specifically to the Athene noctua. See for example the γλαῦξ entry in the Liddell & Scott Greek–English Lexicon, which also gives several references to authors mentioning the γλαῦξ and its association with Athena. Among those, several quotes by Aristophanes, like

But the strongest proof of all is that Zeus, who now reigns, is represented as standing with an eagle on his head as a symbol of his royalty; his daughter has an owl [γλαῦχ᾽], and Phoebus, as his servant, has a hawk.
Aristophanes Av. 516 (greek/eng)

Cleon:
I have seen Athena in a dream, pouring out full vials of riches and health over the people.
Sausage-Seller:
I too have seen the goddess, descending from the Acropolis with an owl [γλαῦξ] perched upon her helmet; on your head she was pouring out ambrosia, on that of Cleon garlic pickle.
Aristophanes Eq. 1093 (greek/eng)

The certainty that the γλαῦξ was the Athene noctua and not another kind of owl comes from the precise descriptions that came to us from many different authors. For references, see the 'Glaux, Glaukos' entry in Birds in the Ancient World from A to Z by W. Geoffrey Arnott:

The Little Owl (Athene noctua), which was clearly distinguished by Alexander of Myndos (fr. 11 Wellmann) from the similar Skōps [the Scops owl] as slightly bigger (21–23 cm ~ 19–20 cm: cf. also Aelian NA 15.28) and clearly bulkier, with large yellow eyes and a face dominated by a white fringe (cf. Cyranides 1.3, 3.10) and a frowning expression.

Page 45 of A Glossary of Greek Birds by D'Arcy Wentworth Thompson also gives a comprehensive list of references on the γλαῦξ.

The simple answer is: The owl is Athena's sacred animal, so that is the bird associated with her. I am almost positive that the owl is a random owl, because Athena did not chose a singular species. She chose the owl in general. I say Athena, because that is her name. She was called Pallas Athena after the loss of her best friend, Pallas, who she lived with most of her childhood.

Not the answer you're looking for? Browse other questions tagged greek symbolism animals athena or ask your own question.