Is it the Muses depicted on the façade of 100 Broadway, Manhattan?

The American Surety Building (also known as the Bank of Tokyo Building) is at 100 Broadway in Manhattan, in New York City. The building's façade is designed to look like the front of a Classical Greek temple (in similarity to a lot of other architectural art in the United States of America), with an entablature supported by eight columns standing as tall as the real, full building's lowest two storeys. 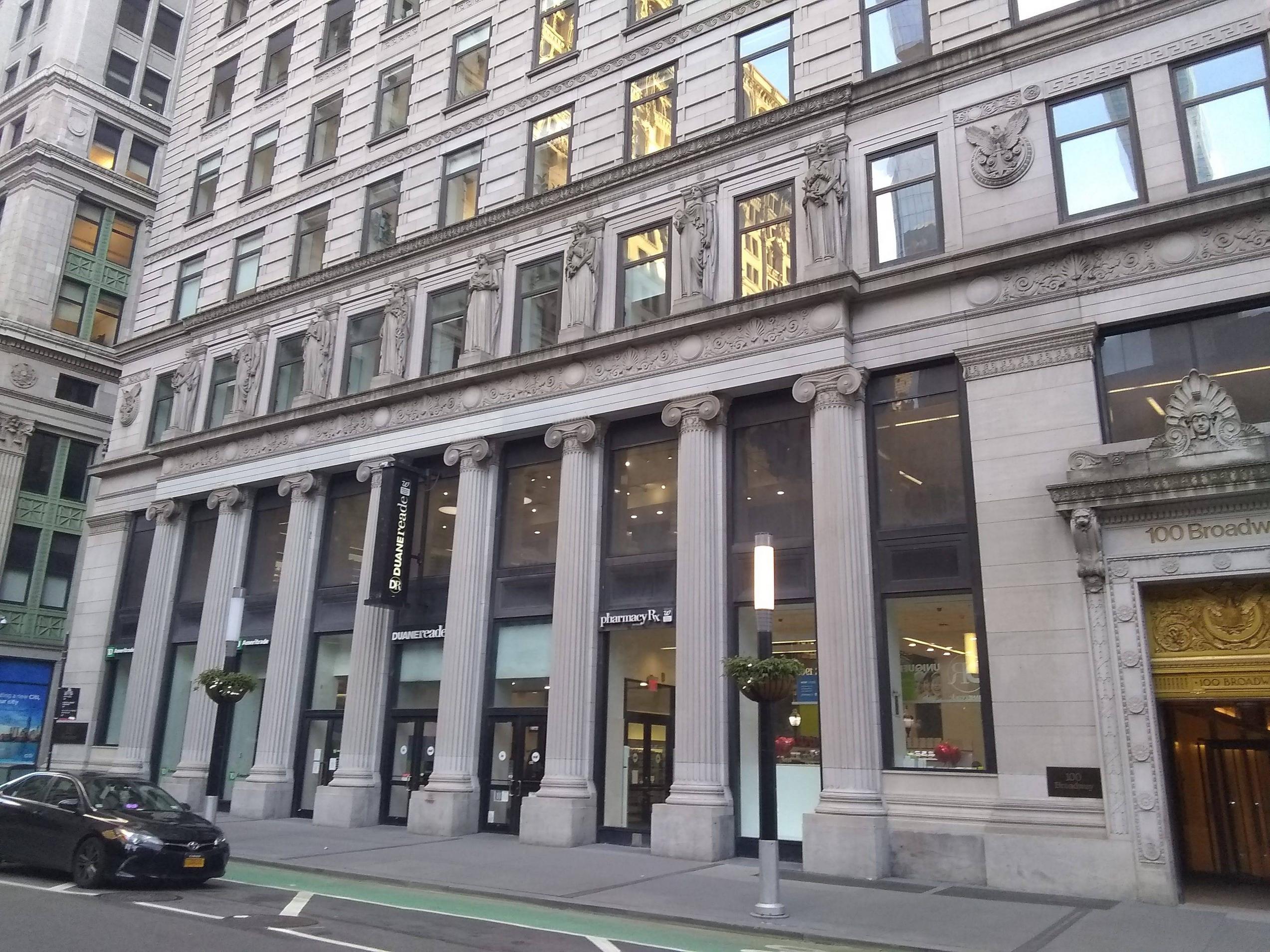 The entablature forms the front part of the floor of the actual building's third level, and atop the entablature, standing as tall as this level's height, are eight women sculpted very much in the style of Ancient Greek statuary, each woman above one of the columns.

Unlike the sculptures of maidens who form very regular repeating patterns in the so-called Porch of the Caryatids in the Erekhtheion [Erechtheum] on the Athenian Acropolis, and in the Forum of Augustus in Rome, certain of the women on the American Surety Building appear to possess unique attributes, implying to me that they represent something more specific than mere replicated ornamentation.

I have noticed, however, that the two leftmost women seem to be exact copies of the two rightmost ones. The middle four seem be more unique, each striking a different pose and bearing a distinct attribute.

At first glance at the sculptures, I simply presumed them to be the nine Muses, but in addition to half of them duplicating each other, there is the fact that there are only eight of them. If they are the Muses, therefore, why is the ninth one absent? Or rather, who else might these ladies be? (Perhaps indeed just a decorative trope?) 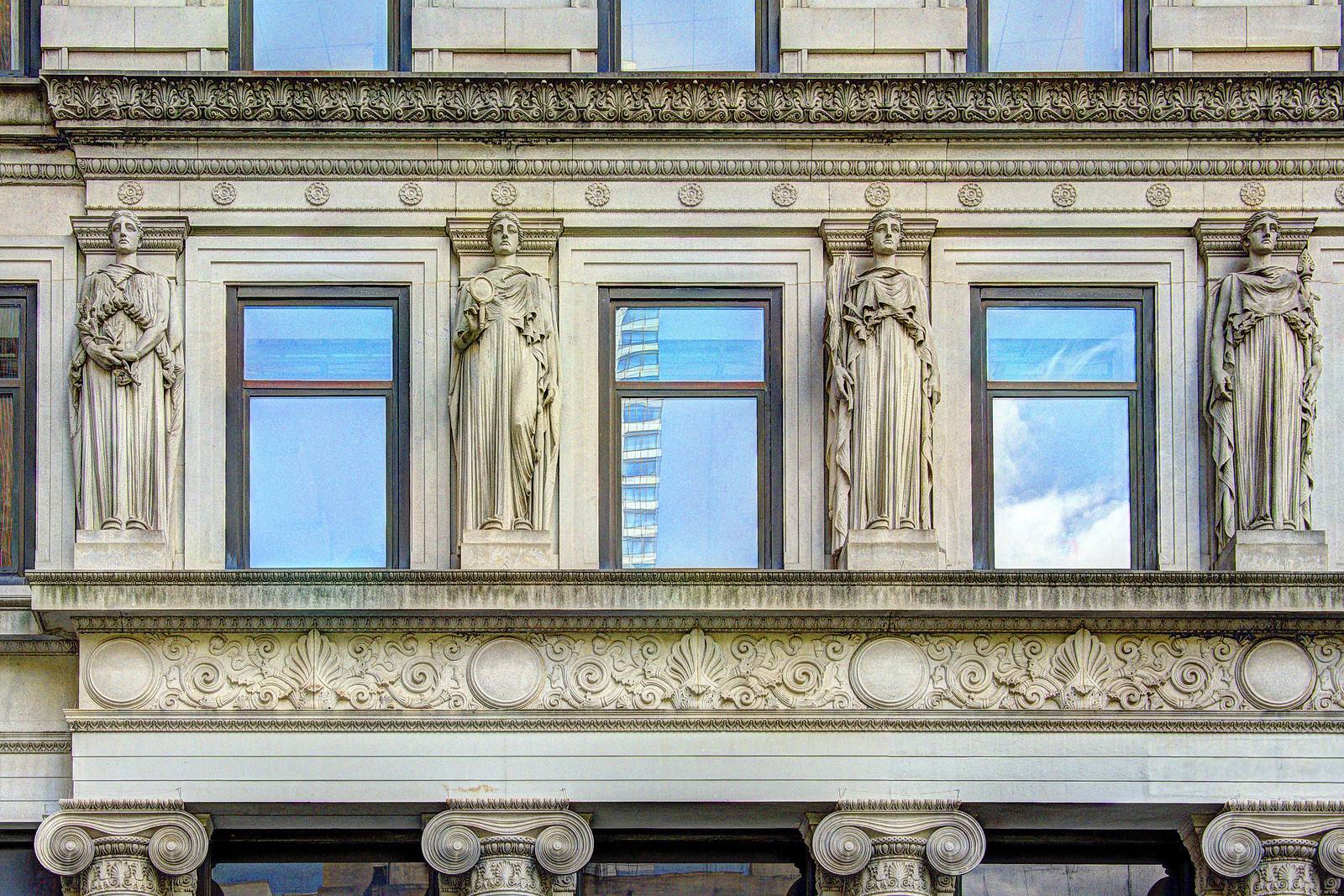 To the far right of this frame, the fourth woman wields a spear. I am unable to identify what the third woman, next to her is holding (a palm frond?), second from right (of the image). 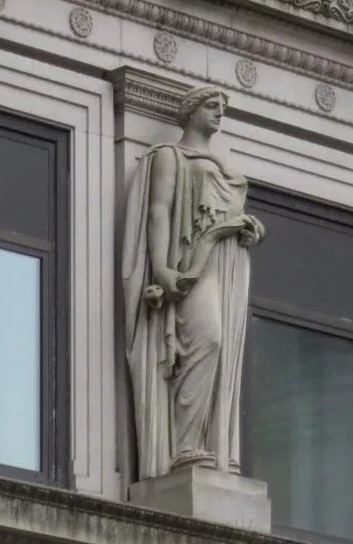 The fifth figure, standing next to the spear-woman, is handling a live snake (well, the sculpture of one)! I'm most curious about her (see the immediately preceding image). The sixth woman, next to the snake-handler, is holding something roughly cylindrical in her hand (perhaps a little scroll?). Here's a closer look at both her and the snake-wielding figure.

Flanking the group, there are also four eagles, two to each side of them, and each bird perched above a down-turned sword, with a shield-like circle behind it. I assume that the symbolism here is modern and American, or at least non-Greek, without any ancient mythical Greco-Roman significance. But that's pure guesswork on my part. (Maybe they genuinely have something substantial to do with the eight figures.) 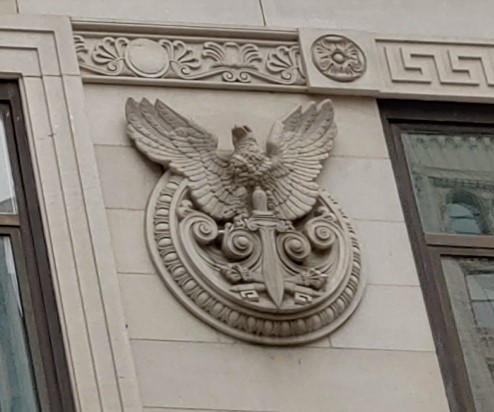 Either way, what are these creatures about? Might they, together with the anthropomorphic art pieces, be simply decor, or do they carry some deeper meaning?

The wiki on the building actually covers it:

The third-story windows above the portico are flanked by six classical figures designed by J. Massey Rhind. Two more figures, in the same style as Rhind's originals, were added in the expansion.

The citation to this is the actual Landmarks Preservation Commission report on the building, which only refers to the statues as "classical figures" without giving any reference to their mythological character.

Given that they're eight figures from an original six and official reports do not mention any names attached to them (aside from the sculpture), indeed you're liking correct that they're merely adornment.

Not the answer you're looking for? Browse other questions tagged greek roman goddesses modern-influence muses or ask your own question.

1
Who is the woman portrayed atop a pillar at UCT's Upper Campus?
1
Is there a deliberate symbolic relationship between the Rockefeller Plaza Atlas statue and St Patrick's Cathedral?

5
Do Muses govern the arts?
8
Are there any groups similar to the muses in other religions?
4
Who is the Queen of Heaven in the The Cowherd and the Weaver Girl?
4
What do we know about the Roman goddesses Adeona and Abeona?
4
Did Sif (the Norse Goddess) ever become a Warrior in mythology?
2
Why are the Sirens the "muses of Hades"?