Is there a deliberate symbolic relationship between the Rockefeller Plaza Atlas statue and St Patrick's Cathedral?

The International Building, part of the Rockefeller Center, stands in Midtown Manhattan. In the building's courtyard, at Number 630 on Fifth Avenue, its entrance is guarded by the dark and imposing 45-ft-tall bronze statue of a character from Greek mythology: the Titan Atlas, his arms outstretched to bear up the weight of the sky, which takes the form of an armillary sphere. 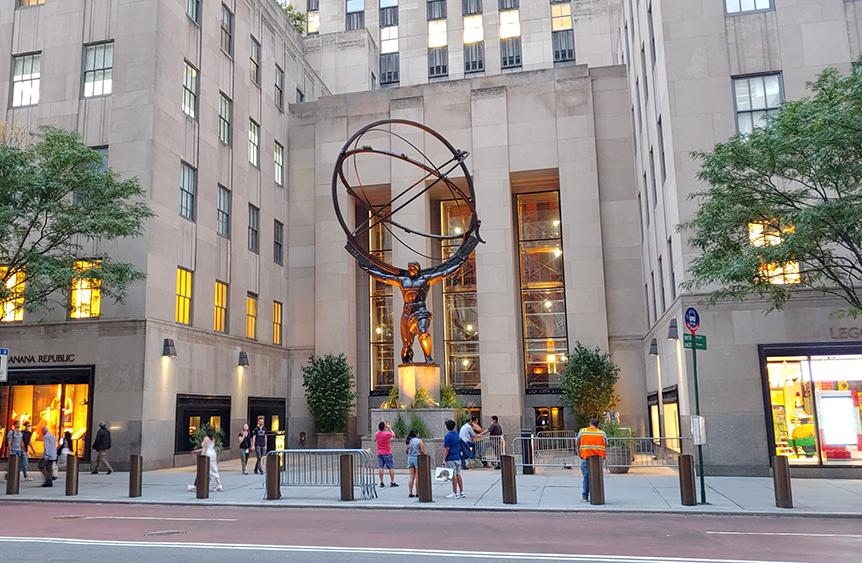 Earlier this year I was able to meet this Atlas in person for the first time, and I was surprised to discover that, for nearly a century now, since he came to 5th Avenue, he's been staring hard at the vastly humongous façade, across the avenue from him, of St Patrick's Cathedral. While I'd seen many photographs of the Atlas statue prior to my visit, I'm not sure that I'd ever heard of this church building before, which Wikipedia describes as "the largest Gothic Revival Catholic cathedral in North America." 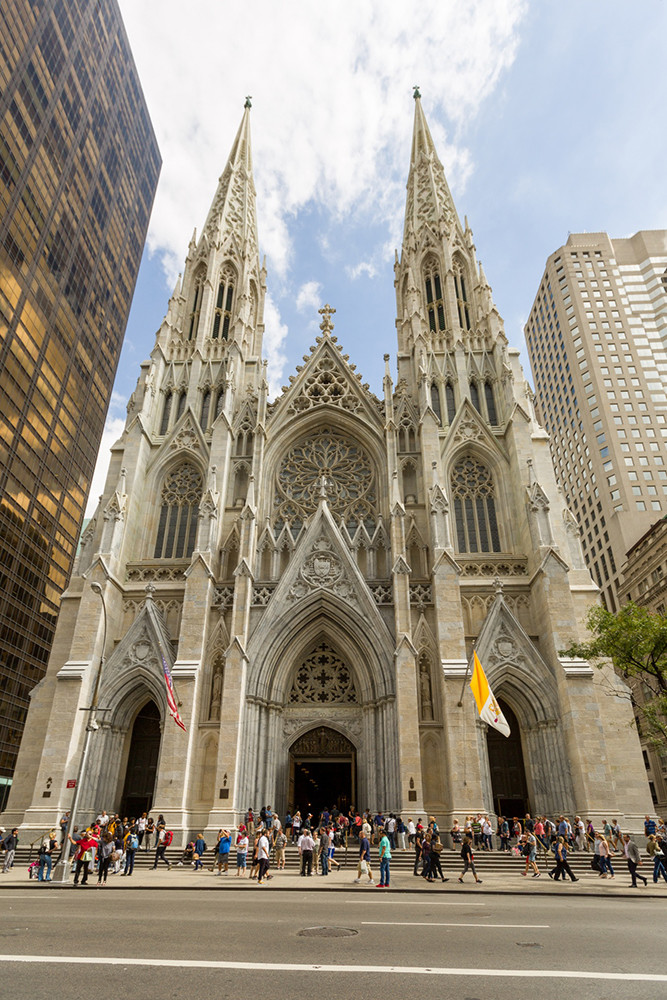 Br. Charles Marie Rooney, on the Dominicana Journal blog, calls it "the mother church of the Archdiocese of New York and the most-visited Catholic cathedral in the United States." It is pretty hard to miss while standing next to Atlas, and, for my part, my attention couldn't help but be drawn to it. Part of the reason for this is especially because the statue seems to be placed, quite on purpose, directly in line with the church's colossal front door. 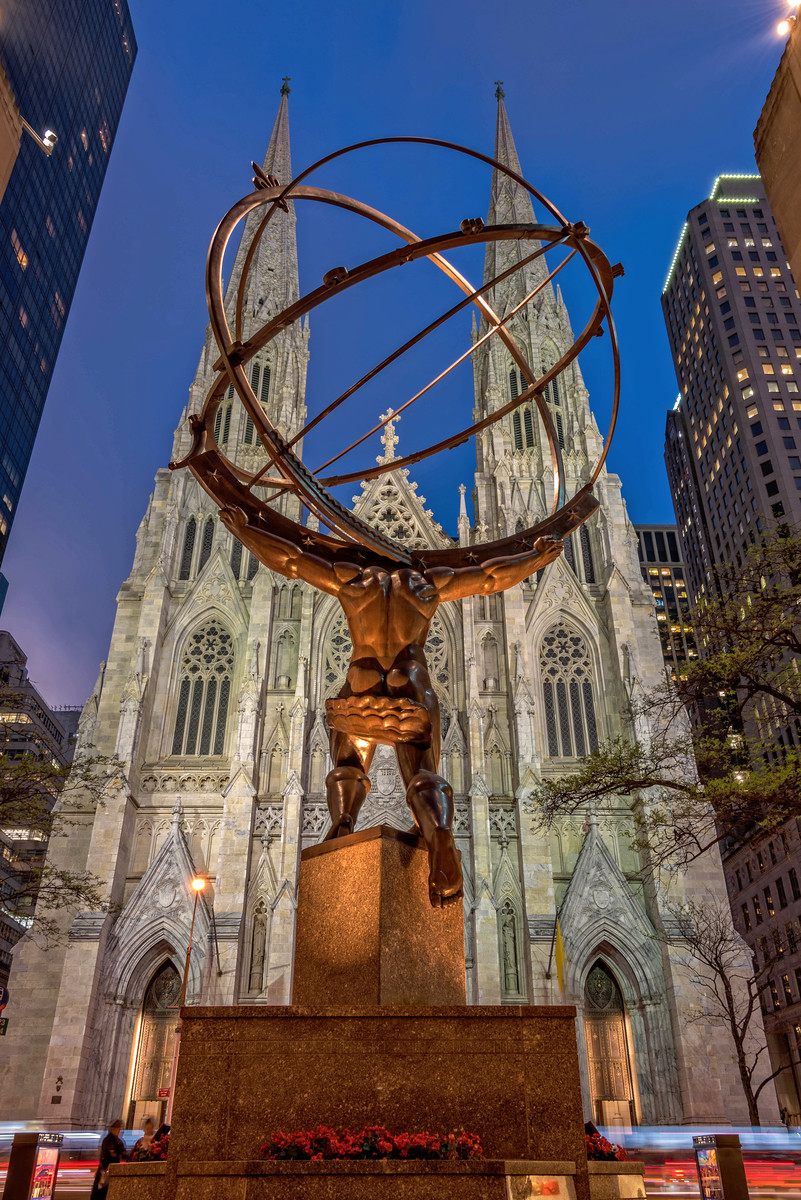 In the case of photographing the statue, even if one wanted to ignore the cathedral, it can't be done since, while standing behind the Atlas, a natural symmetrical design is formed by the church's spires, which end up flanking the Titan's background. The design choices seem so deliberate that I half expected to learn that the two structures were put up collaboratively. Not so, however. Neither the International Building nor its Atlas existed until almost sixty years after the church came up in 1878.

But that doesn't have to mean that there's absolutely no correlation between the two. And I find it extremely difficult to envision artists and architects of the calibre of Lee Lawrie and Rene Chambellan (who created the Atlas and several other works both at the Rockefeller Center and in various other parts of the country) failing to anticipate the creation of a story between the Titan and the cathedral as they were installing their project, even if they did not necessarily have one in mind themselves (also an improbable proposition as far as I'm concerned).

Surprisingly, though, beyond the simple description of the fact of the two structures' juxtaposition, commentary appears to be fairly rare from what I can find. Andy McCarthy, on his New York Public Library blog post "The Titan and the Dictator", says, poignantly, of the Titan:

One hulking, mountainous leg of Atlas staggers off the pedestal, while no promise of relief is yielded by the tiny bronze holymen and holywomen carved into the doors of St. Patrick’s Cathedral across Fifth Avenue. 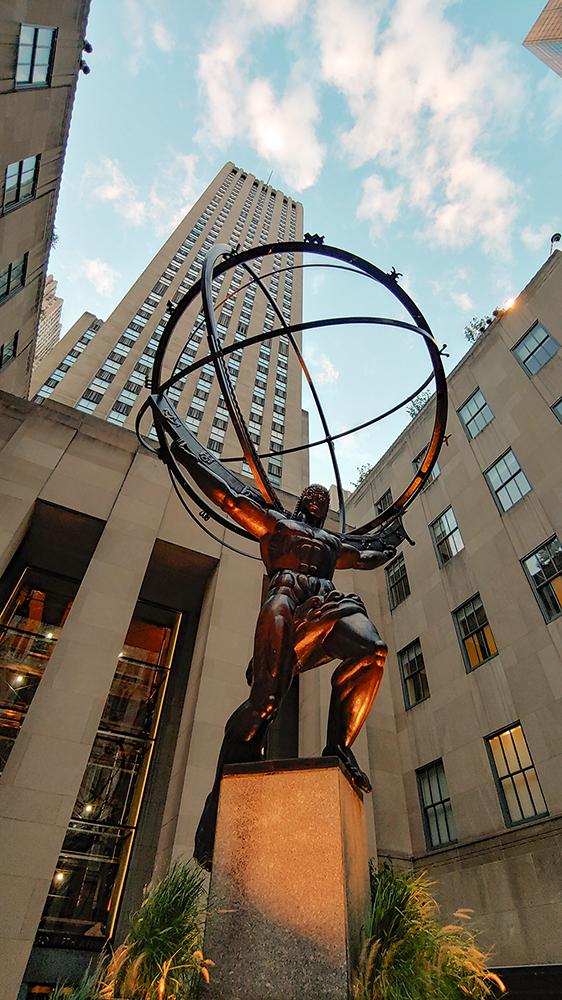 The majority of his blog article, however, is dedicated to refuting the claim in which:

It has been said, written, and said again, that in 1937, New York’s Italian community protested the statue of Atlas in Rockefeller Center because the face of the Titan bore too much resemblance to Benito Mussolini, the fascist ruler of Italy.

Br. Rooney's Dominica Journal post, "Atlas and the Infant", goes on to say:

At first glance, the placement of Atlas—an obvious artifact of pagan mythology—straight across from the Cathedral could be read as a kind of secular imposition upon sacred ground. Atlas, after all, was built nearly sixty years after the completion of St. Patrick’s, at the height of the modern skyscraper boom, and as a kind of ode to the majesty and strength of man.

Rooney adds that as Atlas glares towards the church, when its main doors are open, his positioning gives him a clear view all the way into the heart of the sanctuary.

About 80 yards in front of Atlas, directly behind the Cathedral’s high altar, is a small statue of the Christ Child, bearing a gentle visage and standing with an orb in his hand.

The article then describes this placement of the two figures as a sort of face-off in which it is insinuated that Atlas believes himself to pose some kind of threat, while the Holy Child rather pities the massive Titan who "teeters under the cumbersome weight of the heavens." But the Child, meanwhile, "holds the cosmos in his palm", in a show of "divine power before which both we and Atlas can only tremble in awed obeisance."

I don't know about Atlas's obeisance in this case, but on that point Br. Rooney might have something going. I take note of the fact Atlas is not actually giving the inside of the sanctuary a thousand-yard stare, rather his glance seems to be cast down more at the passersby on the street and the sidewalk on his own side of the avenue, almost in some sort of deference so as not look dead-pan towards St Patrick's, lest this offer any offence. 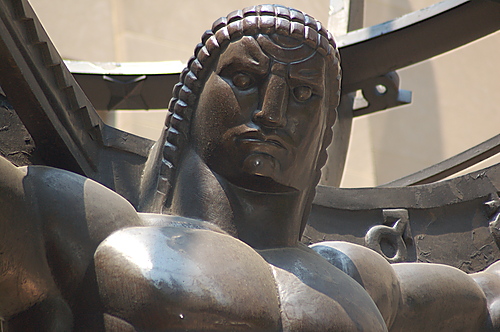 Also, going by the ancient myth, Atlas is only grimacing because he's taken up his current position under the most extreme duress. And specifically in the statue, the base of his neck is bearing the brunt of the celestial sphere's weight. More in line with the centuries-long tradition (mostly in Europe) of interpreting Greco-Roman myths in Christian terms, Elisabeth Hammer has labelled her photograph of the two structures as "St Patrick's Cathedral, NYC, with immeasurable weight bearing, Christ-like Atlas in front" (2018) on Wikimedia Commons, and tagged it with the following description:

Atlas, condemned by Zeus, to bear forever the weight of the world, is a great symbol for Christ, dying on the cross for us, who always identified with the weak, the poor, the sick, the oppressed, thus making himself "one" with human suffering. But stopping not there, he gave us hope and promise for redemption and salvation through his resurrection.

Like the Dominica Journal, a different church-focused blog, Coptic Voice US, interprets the juxtaposition between Atlas and St Patrick's as symbolically antagonistic. In the 2018 blog post "St. Pat’s and the Atlas: My Thoughts on the Opposing Illustrations of Truth and Strength" its author says:

Leaving Greek mythology aside, I would argue that Rockefeller Center, along with the Atlas, are the premier symbols of wealth, power, and material prosperity...

You have two completely opposing philosophies facing each other across 5th Ave. On one side there is a beautiful Church: a symbol of hope and comfort for the poor and needy, a place with open doors to a large parish from all walks of life. On the other side lies a grand bronze statue that embodies power, and dominion; it sits as a symbol that resonates with the wealthy and powerful.

I don't know how fair that assessment is. According to Wikipedia, the Atlas statue has "been appropriated as a ratio of the Objectivist movement and has been associated with Ayn Rand's novel Atlas Shrugged (1957)", which may perhaps make the cut for "resonating with wealth and power." But would Lawrie and Chambellan, and/or whoever else was involved enough in placing the Atlas where it has stood for almost ninety years now, have seen things more like the Dominica Journal and Coptic Voice US, or rather more like Elisabeth Hammer?

Is Atlas defiantly challenging St Patrick's Cathedral somehow, or does he arrive there as a less sinister complement to the building?

The Rockefeller Center website says nothing about this while mentioning him. It is way easier to find commentary on his little brother Prometheus, who appears in a lively yellow bronze overlooking the skating rink in the Center's Lower Plaza, in the next building over, across W 50th Street, having been put there by the sculptor Paul Manship three years before Atlas's introduction to 5th Avenue. 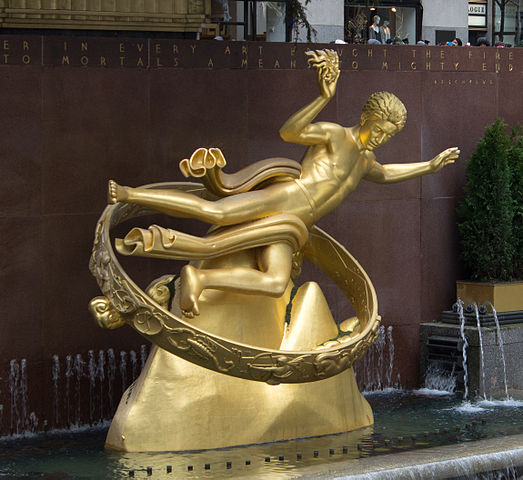 At the southern edge of the island of Manhattan, in the Financial District, a colonnade capped with eight women of Classical Greek style stands as the entrance to the Bank of Tokyo Building on Broadway (in a different Question) overlooking Trinity Churchyard in what appears to be rather benign aspect. Would this be comparable to that?

16
What exactly did Apollo do with respect to the Sun?
23
Who held the celestial sphere before Atlas?
10
Why were the Isles of the Blest ruled over by Cronos and Rhea?
5
Why does Atlas care about the golden apples?
4
What deities did only one city/state recognize?
3
Who is the figure holding a cross next to Christ fallen with the cross in the statue at Budapest 2, Pasaréti tér?
1
Which specific ancient sources did NOT consider Kronus and Chronos to be the same being?
3
Is it the Muses depicted on the façade of 100 Broadway, Manhattan?