Symbolism of the "Temple of the Rose Cross" 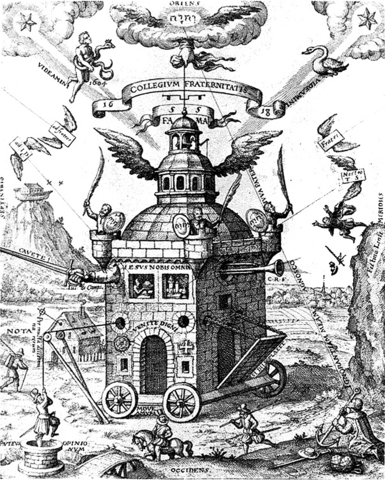 What is the meaning of this symbol?

In Confessio Fraternitatis, Chapter VIII, it is written

God, indeed, hath already sent messengers which should testifie His will, to wit, some new stars which have appeared in Serpentarius and Cygnus, the which powerful signs of a great Council shew forth how for all things which human ingenuity discovers, God calls upon His hidden knowledge, as likewise the Book of Nature, though it stands open truly for all eyes, can be read or understood by only a very few.

"Serpentarius and Cygnus" point to the serpent (snake) and swan in the upper left- and right- hand corners, respectively. Therefore, the upper part of the plate represents messengers of God to the "Collegium Fraternitatis".

This page puts forth this same interpretation, but goes further, saying

Schweighardt succeeds far better than Robert Fludd {Tractatis Apologetica} in escaping the predicament of being unable or unwilling actually to ascribe a physical location to the Rosicrucian Temple. The inference is Masonic-- the Rosicrucian Temple is the universe, its adepts are the wise men of all ages, its disciplines, those who practice the virtues. Life is, therefore, the School of the Holy Ghost.

"Schweighardt" refers to Theophilus Schweighardt, the creator of the plate inserted in the question. If this (unsourced, although supposedly based on Fama Fraternitatus) source is correct, then the Temple - and the image - is nothing more than a symbol of learning, a life-long task.