Were any mortals made into gods?

But were there any mortals that were turned into gods, or immortal?

Some members of this list count as gods, although none are, to my knowledge, regarded as true Olympians. While all gained immortality, I'm only counting a select few as gods because they were either venerated by a large group of people or recognized by other immortals as gods.

Glaucus: Originally a fisherman, he ate a "divine herb" from Cronos and became immortal. He helped the Argonauts on their quest, and for this he was venerated by fisherman and sailors, and accepted by other marine deities as a god of the sea. Philostratus the Elder writes

The story is that he once dwelt in ancient Anthedon and that he ate a certain grass on the seashore, and that when a wave came upon him unawares he was borne away to the haunts of the fishes. Now he is probably uttering some great oracle, for he excels in this art.

Glaucus is somewhat unusual (as the other examples will show) in that he became immortal purely by his own doing. Other figures gained immortality thanks to the favor of a god.

Orithyia: Originally a mortal, she was abducted and raped by the north wind, Boreas, who made her his wife. Two of their children, Calais and Zetes, sailed as Argonauts. Orithyia was venerated by the Athenians as a wind goddess.

Ino (known as the goddess Leucothea): Ino was, like Orithyia, once a mortal princess. She married Athamos (also mortal). Different versions of her life and death exist, but many end with her throwing herself and one of her children into the sea, possibly to escape the rage of Hera, because Ino had raised Dionysus as a boy. The sea deities (sometimes including Poseidon) then accepted her, like Glaucus, as a god, and she received the name of Leucothea. Her son, Melicertes, also became immortal, known as Palaemon, another god of the sea.

Bolina: A slightly more mundane example, Bolina was loved by Apollon. Fleeing him, she, like Ino, dove into the sea, and was given immortality, as a nymph (which for our purposes may count as a deity, although I don't believe she was venerated).

Since your examples are Greek, I presume your focus is exclusively on that mythology.

Dionysus and his maternal relatives, such as his mother, aunts, uncles, cousins and his grandparents Cadmus and Harmonia (as well as his great-uncle Iasion), have a mysterious and ambiguous relationship with immortality (and mortality). Almost all these characters acquire immortality (of some sort) at some point through some especially unorthodox means in their adventures.

Semele's and Ino's sister Autonoe eventually attains immortality after having been married to the minor deity Aristaeus, who himself seems to originally have been a mortal like his brothers Idmon and Autuchus.

Harmonia, the mother of Semele, Ino and Autonoe, is the daughter of Ares and Aphrodite but seems to somehow start of as a mortal being raised by the Pleiad Electra, a lover of Zeus, together with Iasion, a son of Zeus and Electra. Iasion himself sort of becomes a minor god after being killed by his own father.

It's kind of difficult to tell if Plutus and Philomelus, Iasion's sons by Demeter, are considered immortal from birth or if they only gradually become this way similarly to their half-brother Dionysus.

Dionysus made his second cousin Ariadne into a goddess either before or after she killed herself on Naxos Island, whereupon he married her.

For full details on these and many others in general, check out Aaron Atsma's Complete List of Deified Men and Women in Greek Mythology, whom he calls the Apotheothenai. 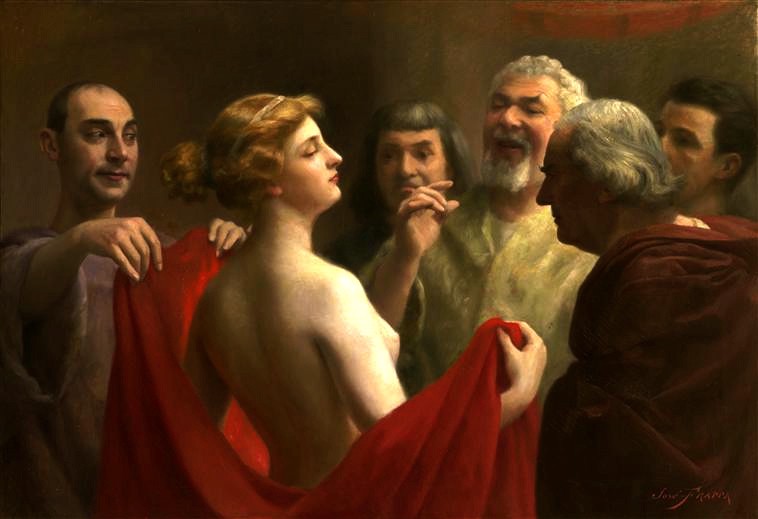 The Ancients have always had a process of deification (apotheosis) which made it possible for mere mortals, other living things, or even an abstract idea to gain god status.

Membership to the divine club was conferred on many who had served humanity in some grand fashion or they had otherwise proven themselves. Some got in by getting hitched to a god and a few just happened to be at the right place at the right time.

Take for example, Phryne (aka Mnesarete). She was an Ancient Greek prostitute who was rumored to be the richest woman in Athens. Not only was her clientele rumored to include the who’s who of the city at the time, but she was so rich she offered to rebuild the wall of Thebes which, was destroyed by Alexander the Great decades before she was even born. However, she did have one condition which was that the builders install a plaque to commemorate the generosity of “Phryne the Courtesan”.

The people decided that in that case, it was thanks but no thanks! They probably couldn’t bear the thought of such a revered monument destroyed by Alexander the Great was being rebuilt by a high-priced hooker who was also going to rub it in their faces.

Phryne was eventually brought before the court for her sinful ways although some say it was because she was profaning the Eleusinian mysteries. Anyhow, as she was on trial for a capital offense a guilty verdict meant she would have to drink poison. This appears to be the practice in Ancient Greece if you lose a capital case.

As the trial progressed the evidence against her was very overwhelming that it was certain she would be convicted. Well, she was a prostitute after all. So she (in some accounts it was her rich lawyer/lover, Hypereides) in one last effort to sway the jury, tore off her dress to reveal her beautifully sculptured yellow-toned body to the jury in all its glory.

These wise old men took one long look at her and realized that only the gods could mold such a flawless body and killing her would certainly be an affront to said, gods. Thus they declared her a prophetess of Aphrodite and set her free.

I have more examples here if you would like:

I can think of Psyche, Glaucus, and Cyrene without looking online. P.S Cyrene was made into a river spirit so she is basically immortal.

Not the answer you're looking for? Browse other questions tagged greek immortality or ask your own question.

14
Was Hermes originally mortal?
3
Why wasn't Poseidon turned into stone?
3
In the battle between the Olympians and the Titans, how could any of them defeat the other one?
4
How could Heracles ensure the victory of the Olympians against the Titans if he was born mortal?
5
Are there stories on gods turning into mortals, or losing immortality?
6
Dionysus sacrifice for humanity
9
How powerful were Greek gods without their items?
4
What animal did Demeter transform into?
4
Putting aside their ability to shapeshift, were the Greek gods especially large compared to humans?
2
Who were all the godly children of Zeus and how many were there?