How did the angels Michael and Gabriel come to be associated with water and fire?

This interesting tidbit comes from the first chapter of Moncure Conway's “Demonology and Devil-lore”:

“These have been associated in rabbinical mythology with the angels Michael (genius of Water) and Gabriel (genius of Fire); but they refer both to the phenomenal glories and the purifying effects of the two elements as reverenced by the Africans in one direction and the Parsees in another.”

There are a number of midrashim that tie Gabriel to fire:

"...He imposes peace in His heights." Said Reish Lakish, Michael is entirely snow and Gabriel is entirely fire, and they stand one beside the other and do not harm one another."

"...said to Him Gabriel: I am the lord of fire; I shall go and heat him up from the outside and cool him down on the inside and I shall make a miracle within a miracle..."

As mentioned by @solsdottir and in the midrashim I brought about Gabriel, Michael was often connected to snow. However, there are other sources that connect him to water:

"..."He makes peace in His heights". We learn that Michael, the Prince of the Right Side of Hashem, water and hail."

"...and it is written: "your prince, Michael"...and these two angels, Michael of water...and He raised Michael from water..."

Chiddushei Aggadot on tractate Berachot 4b:

"Michael etc. The essence of Michael is water, on the right and in charge of grace..."

"..."He imposes peace in His heights" - comes to teach that Michael is the lord of the Right of The Holy One, Blessed Is He [and is of] water and hail..."

The Kli Yakar source brought above paraphrases the Recanati who stated that Uriel is related to air and Raphael to earth.

This is likely based on this Zohar:

Note: Other than the Zohar 1:16a:4, all the sources were translated into English by myself.

After a brief search on Google, I found the following in the Jewish Encyclopedia, which I quote:

Michael is snow, Gabriel is fire (Lüken, l.c. p. 55; comp. Yoma 21b, bottom). Nevertheless, it is the prince of fire and not the prince of ice that is commissioned to rescue Abraham as well as Hananiah, Mishael, and Azariah from the fiery furnace (Pes. 118a; Ex. R. xviii. and parallel passage). In a single passage only (Targ. Job xxv. 2), Michael is called the prince of fire, and Gabriel the prince of water. As prince of fire Gabriel is also prince of the ripening of fruits (Sanh. 95b). As an angel representing an element of nature he is also connected with the metals: Gabriel is gold (the color of fire), Michael is silver (snow), Uriel is copper (Yalḳ., Ḥadash, s.v. "Gabriel," No.75). Gabriel, girded like a metal-worker, shows Moses how to make the candlestick (Men. 29a). He has wings, like all the angels, but while Michael reaches the earth in one flight, Gabriel requires two (Ber. 4b, bottom).

I realize that this links Michael to snow, not water. The Jewish Heritage Magazine also echoes this idea, quoting Job 25:2 and Deut. Rabbah 5:12 in support. Still, snow is close to water, so that may be how Conway got the idea.

In most schools of "Western Ritual Magic," some of which seems to have Judaic roots, Michael is invoked in the South as Archangel of Fire & Gabriel in the West as Archangel of Water.

I don't know the original source of this symbolism, but it is widespread. An example is the famous "Banishing Ritual of the Lesser Pentagram."

Sorry if this seems off topic for Judaism, but it may be of interest. Here is an example: The Lesser Banishing Ritual of the Pentagram.

The archangels are derived from older Mesopotamian stories. These stories were first written down by one of the earliest literate civilization of man, the Sumerian civilization over 5,500 years ago.

Michael (Sumerian: Enki) Enki is the Sumerian god of water, who in the epic Gilgamesh slays the dragon Kur. 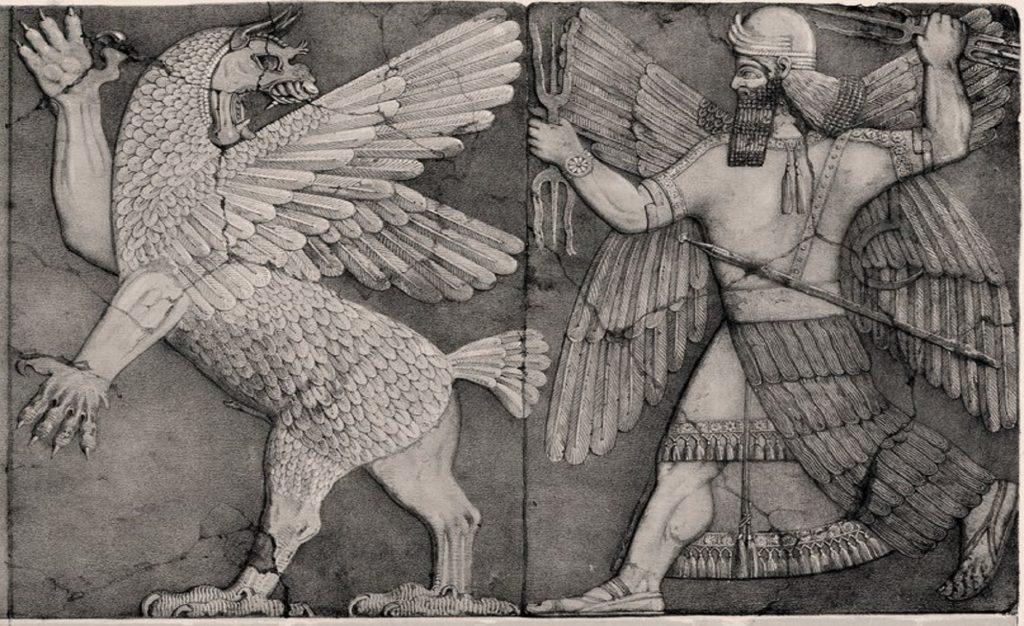 This is the mythological basis of our common depiction of Michael slaying a dragon.

Gabriel (Sumerian: Gibil) Gibil in Sumerian mythology is the god of fire.

Not the answer you're looking for? Browse other questions tagged angels judaism or ask your own question.

3
How did angels get their halos?
9
Significance of Enoch's age in the Hebrew Bible and identification with seventh antediluvian king/sage from Mesopotamian mythology