What is the oldest traditional children's game?

Many traditional children's games are of fairly recent origin. For example, the game of conkers dates back no further than the 19th century, making it no more than about 10 generations old.

The reliability of claims that hopscotch dates back to the Roman empire has been questioned, and claims that the skipping rope was used in ancient Phoenicia, Egypt or China may be similarly fanciful.

What is the oldest traditional children's game? By that I mean, what game played by children today, passed down by oral tradition, verifiably dates back furthest? 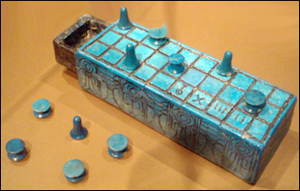 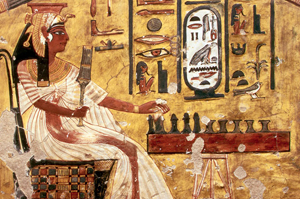 The games that kids played included a game like checkers as well as Senet and their game pieces were made of small stones and knucklebones (which were really sheep ankle bones). They played a game something like ‘jacks’ and dice with these various game pieces. Kids also had toys to play with including clay rattles that were shaped like animals or people. The wealthy families had toys for their kids made out of wood. These included wooden toys that had moving parts. One might be a hippopotamus that had jaws that would close and open. The higher end dolls were made up of cloth and they were stuffed using papyrus reeds.
Ancient Egyptian Games

4
Is there a myth that explains Senet's origins?