Are there other human/marine-animal hybrids in mythology around the world? If so, which animals have been crossed with the human halves?

Greek at least, which is my "expertise",

I guess the Ichthyocentuars counts (have fun pronouncing that one)

a pair of centaurine sea-gods with the upper bodies of men, the lower fore-parts of horses, ending in the serpentine tails of fish. Their brows were adorned with a pair of lobster-claw horns. The two marine Kentauroi (Centaurs) were named Bythos (Sea-Depths) and Aphros (Sea-Foam)... and ... were probably regarded as wise teachers.

They were fish-centaurs, and are part human, and are definitely hybrids. Don't know about the crossing part...

Glaucus, who is a surprise,

He was described as a blue-skinned merman, with copper-green hair and a serpentine fish-tail in place of legs.

A kind-of-merman, but not exactly. He's one of a kind. Human, and partly water-snake-fish.

four mysterious magician-smiths and sea daimones native to the islands of Keos and Rhodes. They invented the art of metal-working and were said to have crafted the sickle Kronos used to castrate his father Ouranos and later a magical trident for Poseidon which the god used to lever mountains into the sea and form the islands. Their malignant use of magic later angered Zeus, who cast them beneath the sea or into the very depths of Tartaros. These strange Sea Daimones were sometimes described with the heads of dogs and fish-flippers for hands.

I'm sure there are more, so feel free to edit. (make sure it's greek.)

Your question is something that comes out of a Doctor Who Series!

To start with, could The Egyptian Sobek be placed in the category of a marine human hybrid.

Sobek (also called Sebek, Sochet, Sobk, and Sobki), in Greek, Suchos (Σοῦχος) and from Latin Suchus, was an ancient Egyptian deity with a complex and (literally) fluid nature.2 He is associated with the Nile crocodile and is either represented in its form or as a human with a crocodile head. Sobek was also associated with pharaonic power, fertility, and military prowess, but served additionally as a protective deity with apotropaic qualities, invoked particularly for protection against the dangers presented by the Nile river. 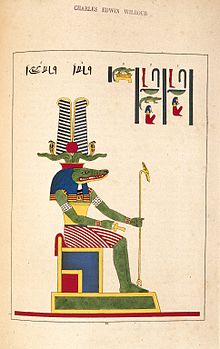 Then there is Triton:

TRITON was a fish-tailed sea god, the son and herald of Poseidon, king of the seas. He stilled the waves with the blow of a conch-shell trumpet. Triton was also described as the god of the giant, Libyan, salt-lake Tritonis. When the Argonauts were stranded in the desert he assisted them in finding passage from the lake back to the sea.

Trtion was depicted in Greek vase painting as fish-tailed merman, sometimes bearded, sometimes youthful. In Greek sculpture and mosaic he was often given twin fish or dolphin tails. Mosaic art added a pair of crab-claw "horns", green-tinged skin, and sometimes a pair of equine forelegs. As Poseidon's herald, he had a winged brow and conch-shell trumpet.

Triton was often multiplied into a host of sea-spirits called Tritones which were regarded as satyr-like daimones of the sea. 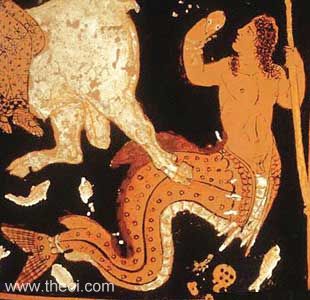 Then there is Skylla:

SKYLLA (or Scylla) was a monstrous sea goddess who haunted the rocks of certain narrow strait opposite the whirlpool daemon Kharybdis. Ships who sailed too close to her rocks would lose six men to her ravenous, darting heads.

Homer describes Skylla as a creature with twelve dangling feet, six long necks and grisly heads lined with a triple row of sharp teeth. Her voice was likened to the yelping of dogs. This description of Skylla is probably derived from the imagery of words associated with her name: namely, "hermit-crab" (Greek skyllaros), "dog" and "dog-shark" (skylax), and "to rend" (skyllô). In classical art she was depicted as a fish-tailed sea-goddess with a cluster of canine fore-parts surrounding her waist.

Late classical writers say that she was once a beautiful nymph who was loved by the sea-god Glaukos. She has a jealous rival in the witch Kirke who used her magics to transform Skylla into a monster. Older poets, however, imagined Skylla as a creature born monstrous. 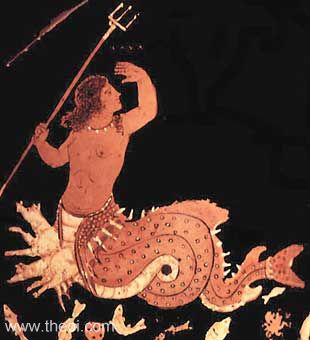 Phorkys could also be added to this number.

PHORCYS (Phorkys) An ancient crab-like Sea-God. He was the father and grandfather of most of the monsters of myth.

Britian, Ireland and the Scandinavian countries all feature forms of the nyx or nack, a shapeshifting water spirit. They often take horse form, and can be men who lure women away as often as the more conventional female sirens. The men often take the form of fiddlers or other musicians, and you can learn their music if you approach them the right way.

Folklore for such creatures comes from many sources, but this site has some good primary sources. I found out about them first in Patrick Ford's article on the Irish myth of the Well of Nechtan.

24
Are Kitsune and Huli jing the same?
32
What is the difference between giants, Jotuns and trolls in Norse mythology?
21
Prevalence of Underwater Panther
9
Why is the crow of a rooster fatal to a basilisk?
3
What are the origins of thestrals?
4
Are there any mythical creatures in Islam?
12
Slavic mythology, human-animal hybrid creature
1
A unified understanding and description of a “spirit”?
9
Who was the first Satan like deity/creature/person in mythology?
1
Horse-headed human -> Ipotane?