In Greek mythology the story of the birth of the god Hermes makes it sound as if he was originally mortal and that he somehow managed to bribe his way into becoming the twelfth [i.e. the last] of the Twelve Olympians, after appeasing his half-brother Apollon [Apollo] with a musical instrument, and sacrificing some of the cattle he had stolen from the same Apollon to the other eleven Olympians and to himself(!).

Hermes’ mother Maia was a daughter of the Titan Atlas. By some of this Titan's other daughters Zeus and Poseidon also had other sons, who all seem to have been born mortal. So there must have been something special about Maia herself or Hermes was at birth a mortal just like his half-brothers and cousins, and his father granted him immortality after he performed his amazing feats of theft on the day of his birth.

In the Homeric Hymn to Hermes, Apollon threatens to cast the baby Hermes into Tartaros "to rule over the little folk there," a threat which no other god but Zeus ever seems to make to any other person in Greek myth. Is this an indication of Hermes' mortality at this point?

Some Elaboration Notes for Your Consideration

By his wife Pleïone, Atlas had several other daughters apart from the seven Pleïades, but focusing on these seven for an elaboration of what I mean about the inconsistency of their children’s mortality states1, here is an illustration of their families. 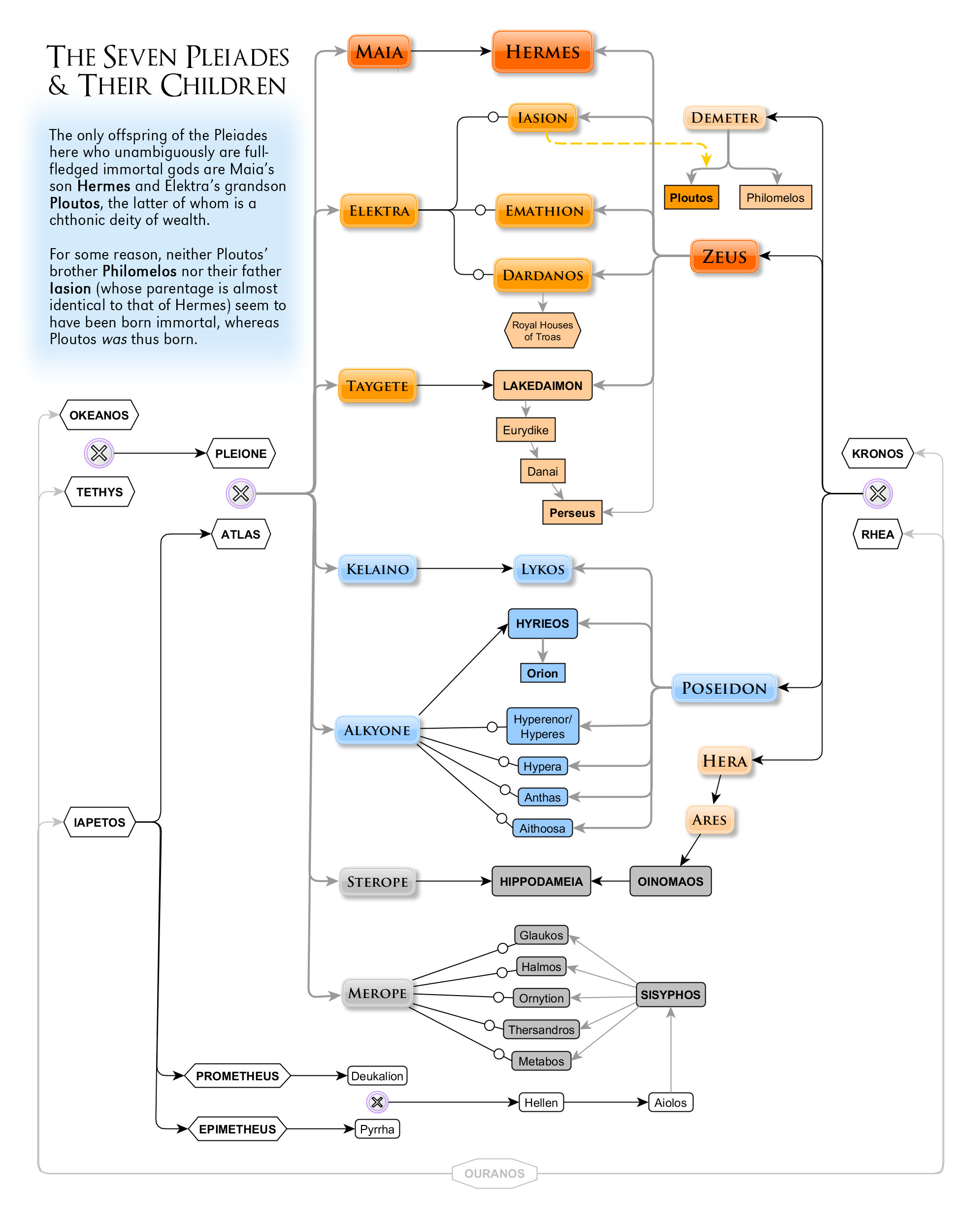 Starting off with Maia as Number 1, if my estimation is correct, the birth order of the other 6 sisters is indicated by the importance of the gods with whom they consorted, so that Zeus had the 3 eldest, and Poseidon the next 2, while mortal kings married the 2 youngest.

I reckon that Sterope is older than (or, in some other sense, senior to) Merope because of the alternate tradition, mentioned by Plutarch and Hyginus, in which Sterope consorts with the god Ares (as opposed to marrying Ares’ mortal son Oinomaos; instead she becomes the mother of Oinomaos). I have therefore arranged them in this descending order in the illustration.

The proposed pattern would indicate that the younger the Pleïad is, the higher the chances that her offspring will be mortal, whether the father is immortal or not. (A similar phenomenon might be observable with Pleïone and her sisters, the other Okeanides [Oceanids].) This is one of a few ways I can think of in which the logic is supposed to work.

The son of [the eldest] Maia is immortal {born in this condition?}.

The sons of [the 2nd-born] Elektra seem to become [minor] deities eventually (perhaps all of them, after their death, like Iasion; or, alternatively, are Iasion’s 2 full-brothers born immortal, unlike him?).

The son of [the 4th-born] Kelaino perhaps is made into an immortal by his father. (In Apollodorus’ Bibliotheka, Poseidon takes Lykos to live on the Blessed Islands.)

All the children of the remaining sisters are mortal.

Assuming that Hermes was born immortal—in the illustration here the god has four [half-]brothers (who are also his maternal cousins)—why is none of these brothers (as far as I can tell) born immortal? Or are Iasion, Emathion, Dardanos and Lakedaimon (perhaps less-renowned?) immortals?2

The simpler solution to all this is per the main Question: Hermes was not immortal at birth but performed some fancy footwork in order to attain his status as one of the highest gods of the universe [of Greek mythology]. This way there is no incongruity between his mortality condition and that of his closest brothers and cousins. I do acknowledge that such incongruity is in no way uncommon to Greek myths, and is part of what gives them nuance appeal, but I am quite interested in whether there is any logic internal to the narrative world of these myths to explain this apparent incongruity in particular.

I am not so much asking whether Hermes was a god or not when he was born. As with Hermes’ half-brother Zagreus3 (which is a perhaps much less “mainstream” instance [from rather more “fringe” Greek mythology]), there are in fact cases of mortal divinities in this mythology.

My question has more to do with whether Hermes could die when he was born. And if not, what is it that sets him apart from the other children of Pleïades who also had divine fathers (Great Zeus included) but who were themselves clearly mortal?

{This is an expanded version of a question that I have asked on Yahoo! Answers and on MythForum.}

1. The other daughters of Atlas and Pleïone (apart from the Pleïades, i.e.) are irrelevant to the topic since only one of them, namely Dione, has any children. Dione’s husband Tantalos and their children Pelops (who marries Hippodameia, the daughter of the Pleïad Sterope [see illustration]), Niobe and Broteas are all mortal. In Hyginus’ Fabulae, Dione’s brother Hyas is killed by some wild animal, so he obviously is mortal. In the same passage of the Fabulae, all the children of Atlas and Pleïone in general are described as mortal too. In that instance Hermes’ immortality is thus even more anomalous.

2. The daimon part of Lakedaimon’s name, for instance, might indicate something about [his] divinity. (Also I realise that Emathion and Iasion might not be brothers but rather merely 2 different names for the same character.)

3. Zagreus was in fact a god, born of two immortal parents; nonetheless he was slain by the Titans.

And Zeus made Hermes his personal herald and messenger of the gods beneath the earth."

It says that Zeus had to make him into his personal herald, and messenger, but there's no way that

[II. HERMES STEALS APOLLO'S CATTLE.] Though he was laid out in swaddling-clothes with her winnowing-basket for a cradle, he escaped and made his way to Pieria, where he stole some cattle that Apollon was tending. To keep from being discovered by the tracks, he put boots on their feet and led them to Pylos. He hid them in a grotto, except for two which he sacrificed, pinning up their hides on rocks, boiling some of the meat for his meal and burning the rest.

Hermes, as a mortal baby, is able to think so in depth, and walk all the way to Pieria, Pylos, and back. Somehow.

According to the Homeric Hymns,

[H]e lay not long waiting in his holy cradle

A holy cradle? Hmm. Either I'll have to add that to holy cow, and gosh darn, or this is a clear sign that Hermes is born as a god.

Very delightful are the thefts of the god; for the story is that Hermes, when Maia bore him, loved thievery and was skilled in it[.]

He sure seems like a god now! This is now wide and clear.

So, in conclusion, Probably not.

I'm not finding any ancient sources that explicitly mention the issue, but there is a mediaeval text called the Third Vatican Mythographer, written in Latin, and using the Roman names of the gods, which does chime in, perhaps based on a genuinely ancient tradition.

According to Ch. 9, §2 of the aforementioned work, Mercury (the Roman equivalent of Hermes),

whose father was Jove [Zeus] and whose mother was Maia, was half mortal. But then Juno [Hera] put him to her own breasts and thus filled him with divine milk so that he might become immortal.

In addition to this, the First Vatican Mythographer (117) repeats the story saying also that the reason Juno did this was because of how much she loved Mercury, whom she also "introduced... to the art of healing."

Even more so than other Latin sources, however, the Vatican Mythographers have a tendency towards being chock-full of problems which render much of the information contained in them to be fairly suspect.

The idea of Hermes-Mercury having gained his immortality via Hera-Juno's breast-milk appears nowhere else that I have seen, and seems to be either a confusion or an imitation of the same story being told about how two other illegitimate sons of Zeus, namely Dionysos [Dionysus] and Herakles [Hercules], both born of mortal women, managed to shed their own mortality.

Not the answer you're looking for? Browse other questions tagged underworld sacrifice immortality apollo hermes or ask your own question.

3
In what ancient source, if any, does the infant Hermes disguise himself as Ares?

21
Who gave Hermes his winged shoes?
14
Any examples of dying and resurrecting gods that exist only in heaven, not earth?
9
Why did the Trojans believe Cassandra's recognition of Paris?
6
Would the gods often take the form of another god?
5
Are Krishna and Hermes related?
3
How is Hermes linked to Odin?
3
Who said Hermes helped Hades?
7
What is the relationship between the term 'hermit' and the traditions around Hermes and Hermeticism?
4
Was the Grim Reaper originally depicted with a scythe or a sickle?
3
In what ancient source, if any, does the infant Hermes disguise himself as Ares?