Is it Lucifer or Venus?

Which deity, according to Greek and Roman mythology, is represented by the planet that we call Venus? Is it the goddess Venus (Aphrodite in Greek) or is someone named Lucifer?

The name of the deity represented by the planet in question, strictly speaking, is Lucifer, or Luciferus, that is, as far as Roman mythology is concerned. His Greek equivalent has a few different names, the commonest of which are Eosphoros and Phosphoros. The majority of Roman mythology is older Greek stories copy+pasted into new files with the Greek names swapped out for Roman ones.

Lucifer was the personification and god of the Morning Star, and was one of the many sons of the Titan Astraeus by his wife Aurora, the goddess of the dawn.

Lucifer had two mortal sons who grew up to become kings. Ceÿx, the younger and more peaceful one, was king of Trachis, and a friend of Hercules and of Achilles’ father Peleus. In Book 11 of his Metamorphoses, the poet Ovid says that Ceÿx’s face shone like the brightness of his father the Dawn-Star, who is described as shrinking from shining in the sky when Ceÿx later drowns in a shipwreck.

Lucifer was indistinct, and not to be known, that dawn, and since he was not allowed to leave the sky, he covered his face in dense cloud.
Line 572

Lucifer’s older son Daedalion was a warlike king who became a grandfather of the musician Philammon and an ancestor of the Scythian king Thamyris. Through Daedalion, Lucifer was also an ancestor of the famous Trojan War hero Ulysses, who is called Odysseus in Greek. (Daedalion’s daughter Chione gave birth to Autolycus, the father of Anticlea, the mother of Ulysses.)

The few stars which were referred to as “planets” in ancient Italy and Greece were each dedicated to a particular major deity. The star Lucifer was known as the planet Venus because it was governed by the Roman love-goddess Venus. Aeneas, a son of Venus who fought on the side of the Trojans during the Trojan War, escaped from the destruction of Troy and is said to have made his way to Italy where his descendants founded the city of Rome. According to Varro, Aeneas was led from Troy to Europe by Lucifer, the star of his mother Venus.

The system of naming the planets based on the divinity who owned each one was borrowed from the Greeks. The Greek equivalent of the goddess Venus is Aphrodite. In Greek myth, the planet which Aphrodite owned was supposed to be the Greek star-god Eosphoros [Eosphorus]. Phosphoros was a title used for Eosphorus, whom the Romans called Luciferus.

The Latin word Luciferus and the Greek word Phosphoros mean exactly the same thing: “Bringer/Bearer/Carrier of [the] Light,” which name was given to this god because he was the last star of the night sky to be visible on Earth before the sunrise.

In Ancient Greek astronomy there were five heavenly bodies whose movement was so peculiar that they were dubbed astra planeta, the “wandering stars.” From the label applied to them we get the English word planet. These were Stilbon, Eosphoros, Pyroeis, Phaethon and Phainon. English speakers today know them best, from the Roman names of the divinities who governed them, as Mercury, Venus, Mars, Jupiter and Saturn, respectively. These, in turn, correspond to their Greek counterparts Hermes, Aphrodite, Ares, Zeus and Kronos, respectively.

In some versions of this cosmology, the sun and the moon are also counted as “planets,” each with its corresponding deity likewise, making up a total of seven “wanderers” in the sky. I suspect that, apart from his multiple names and titles, the main source of confusion about the god Eosphoros/Phosphorus/Lucifer being the same as the planet Venus is because Venus is the only one of the planets owned by a female deity, even though all of the stars are themselves male deities. (The one exception to this is the “planet” Moon [who is = the Greek goddess Selene, called Luna by the Romans].) The star-god was male but he was ruled over by a more powerful divinity, who was female, i.e., Venus/Aphrodite.

In Greek mythology there was a pair of winged Titans named Helios, who was the sun-god, and Eos, who was the dawn-goddess (the Greek version of Aurora). Each of them drove his/her own fiery chariot drawn by flaming horses, and the two of them were literally the light of the world. When they descended to the Earth at the western edge of the world, the universe was plunged into night-time. (And during certain portions of the month, the night was governed by another winged Titan named Selene, the sister of Helios and Eos).

Eos was the herald of Helios, and she perpetually rode ahead of him, announcing his arrival to the world each day in the form of morning-tide. In primordial times, Eos was married to her cousin, another winged Titan named Astraios, whose name means “Starry” (Astraeus to the Romans). The numerous stars of the sky were the sons of Astraios and Eos. One of these many celestial brothers was Eosphoros, who was named after his own mother. He acted as Eos’ herald, flying on his wings ahead of her to announce to the world the arrival of Eos at the beginning of each day prior to the Dawn’s performance of a similar service for the Sun in the van of his own daily appearance. (In the Thebaid and the Silvae, however, Statius portrays the Roman Luciferus as riding a winged horse rather than himself being winged. The Greek Eosphoros, on the other hand, is described as a stableman for the Sun’s horses.)

Eosphoros’ uniqueness among the stars, distinguished even among the few Wandering Ones, is that he was the only one still visible upon the daily appearance of Eos, “Dawn,” in the sky. His name, meaning “Dawn-Bringer,” is a reference to his mother’s light which he “brought” or “carried” into the world. One of his brothers, named Hesperos, “Evening” or “Dusk,” was the Evening Star, being the first visible star in the night sky.

C. 500s BC, Parmenides of Elea, or rather (according to Pliny the Elder’s Natural History) Pythagoras of Samos, realised that the morning and evening stars were in fact the same planetos, at which point Eosphoros and Hesperos became merely alternate names for the same star-god in his “brighter” and “darker” aspects. (About a thousand years after Parmenides and Pythagoras, the Egyptian poet Nonnus, in Dionysiaka 42.340, refers to this planet as esperíen Aphrodíten, the “Aphrodite of the Evening.”)

Phosphoros, “Light-Bringer,” was a title for this deity. Luciferus is basically the Latin translation of Greek φωσφόρος (phosphóros). The Romans also simply transliterated (rather than translated) φωσφόρος into Roman script, as Phosphorus, and used this as an epithet for their Luciferus.

In Roman mythology the evening star was originally a distinct god named Vesper or Vesperus (and also Hesperus, from the Greek Hesperos), a brother of Luciferus. A similar merging as that between Eosphoros and Hesperos occurred between Lucifer and Vesper when it was deduced that the morning and evening stars were actually a single celestial luminary.

Ovid’s Metamorphoses describes Lucifer escorting the other stars in a procession out of the night sky at each dawn. Lucan’s Pharsalia much more dramatically has the stars flee from the sky, at the speed of hurled spears, upon the approach of the sun. The only one of them who always maintains his position until the sunrise is Lucifer.

Here's a sketch of part of his section of his family tree: 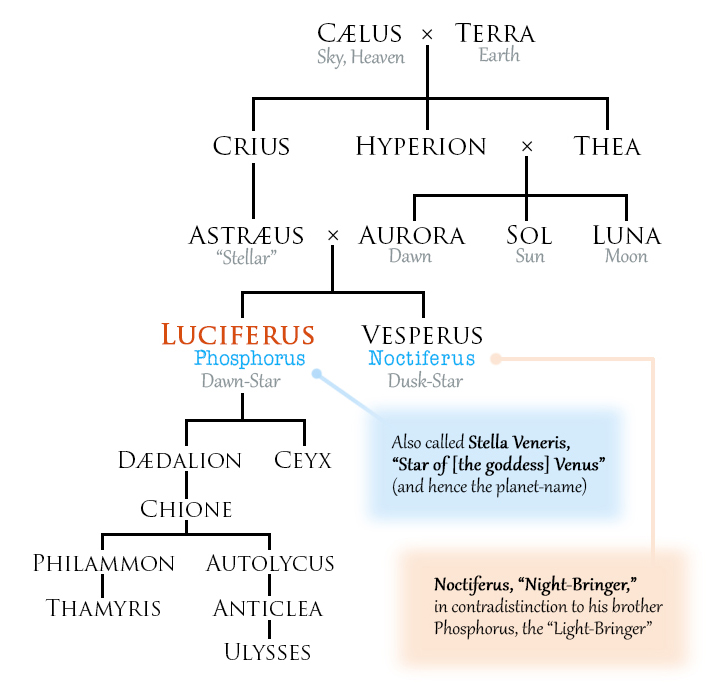 As I recall, Lucifer comes from the Latin lux (light), thus as the "star" that hearkens the sunrise, you get "lucifer", which combines lux and fero (bear or carry).

In terms of how and when various terms were used, that will require some real scholarship, but here is my attempt at a primer:

Cicero uses the names of the gods, including Venus, to refer to planets in De Republica, 6.17:

The universe is composed of nine circles, or rather spheres, one of which is the heavenly one, and is exterior to all the rest, which it embraces; being itself the Supreme God, and bounding and containing the whole. In it are fixed those stars which revolve with never-varying courses. Below this are seven other spheres, which revolve in a contrary direction to that of the heavens. One of these is occupied by the globe which on earth they call Saturn. Next to that is the star of Jupiter, so benign and salutary to mankind. The third in order, is that fiery and terrible planet called Mars. Below this again, almost in the middle region, is the Sun — the leader, governor, the prince of the other luminaries; the soul of the world, which it regulates and illumines, being of such vast size that it pervades and gives light to all places. Then follow Venus and Mercury, which attend, as it were, on the Sun.
Source: Oliver J. Thatcher, ed., The Library of Original Sources (Milwaukee: University Research Extension Co., 1907), Vol. III: The Roman World, pp. 216-241 (with unlisted modifications)

Note: The source of the English is problematic, as it is not an academic site, but the translation jibes with my reading of the Latin. The planet/god names are the actual vocabulary in the linked Latin source text.

However, Cicero also notes a distinction in the name of the planet depending on when it appears:

Essentially: ""Of the five that orbit closest to earth, the star Venus is known as Phosphoros in Greek, and in the Latin tongue is called Lucifer when it precedes the sun, but Hesperos if it follows the sun."
[See @Brianpck 's analysis of the passage on Stack Latin for more details.]

Thus, Venus and Lucifer/Hesperos may be interchangeable in Latin texts, at least per this initial, cursory inquiry.

Adrinka's seems to be the direct and definitive answer: "The star Lucifer was known as the planet Venus because it was governed by the Roman love-goddess Venus."

Lucifer is the Latin name of Eôsphoros, who was paired up with Vesper.

Eôsphoros means dawn-bringer. They were Astra Planeta, gods of the five planets.

EOSPHOROS and HESPEROS were the gods of the star (astron planeta) Venus.

But remember that it is present day - they did not call the planet they saw in the sky Aphrodite.

Not the answer you're looking for? Browse other questions tagged greek myth-identification roman astrology or ask your own question.

3
Did the Romans and Greeks worship the sun as their sun god?
4
Which gods were Odysseus and Penelope directly descended from?

13
What is this myth: elderly couple unwittingly feed gods, changed into tree
7
Differences in the Greek and Roman portrayals of Cronos/Saturn
2
Why did Hera have so many sacred things?
14
What is the symbolism behind Psyche's tasks?
7
Did Greeks bow to their gods?
6
When was a pair of Greek and Roman gods first identified?
4
What do we know about the Roman goddesses Adeona and Abeona?
3
How were Nymphs born in Roman Mythology?
5
An ancient source for the myth of Venus' creation of red roses?