Could you look at Medusa's head through a distorted surface?

So in Yannis' Awesome Answer

It was looking directly into Medusa's eyes that would turn a mortal to stone, not the whole of her face. Using the shield as a mirror meant that even if Medusa's gaze fell upon Perseus, it would be at an angle.

So to answer this, the first thing I can remind you is... Gremlins 2, just listen when then are punning about the rules concerning the Mogwai... same here XD.

Now by itself, we find the first depiction of Medusa in the Iliad. Here is the passage with Robert Fagles translation:

Over Athena's shoulders slung her shield, all tassels flaring terror—Panic mounted high in a crown around it, Hate and Defense across it, Assault to freeze the blood and right in their midst the Gorgon's monstrous head, that rippling dragon horror, sign of storming Zeus.

Agamemnon's shield: Circling the center, ten strong rings of bronze with twenty disks of glittering tin set in, at the heart a boss of bulging blue steel and there like a crown the Gorgon's grim mask—the burning eyes, the stark transfixing horror—and round her strode the shapes of Rout and Fear.

So at the origin we find her only on a shield. She takes some shape in the Odyssey becoming a servant of Persephone:

The dead came surging round me, [...] and blanching terror gripped me—panicked now that Queen Persephone might send up from Death some monstrous head, some Gorgon's staring face!

Notice she is striking fear and paralyze people, even simply on a shield.

Later the main source we have is in the Apollodorus:

Now Medusa alone was mortal; for that reason Perseus was sent to fetch her head. But the Gorgons had heads twined about with the scales of dragons, and great tusks like swine's, and brazen hands, and golden wings, by which they flew; and they turned to stone such as beheld them. So Perseus stood over them as they slept, and while Athena guided his hand and he looked with averted gaze on a brazen shield, in which he beheld the image of the Gorgon, he beheaded her.

Notice here the presence of a brazen shield in Perseus' hand. As well as the overall monstrous aspect of the Gorgons.

Now you have later Roman author Ovid, and here is the passage in the Metamorphoses:

In the fields and along the paths, here and there, he saw the shapes of men and animals changed from their natures to hard stone by Medusa’s gaze. Nevertheless he had himself looked at the dread form of Medusa reflected in a circular shield of polished bronze that he carried on his left arm. And while a deep sleep held the snakes and herself, he struck her head from her neck.

So Homer, Hesiod and Ovid all are saying the same: No one can bear the sight of Medusa. Even Ovid who is clearly mentioning the fact the creatures has been turned to stone by Medusa's gaze still has Perseus approaching her with his shield raised while she is sleeping.

Note also Ovid does not give Medusa's lots of monstrous feature:

They say that Neptune [Poseidon], lord of the seas, violated her in the temple of Minerva [Athena]. Jupiter’s daughter turned away, and hid her chaste eyes behind her aegis. So that it might not go unpunished, she changed the Gorgon’s hair to foul snakes. 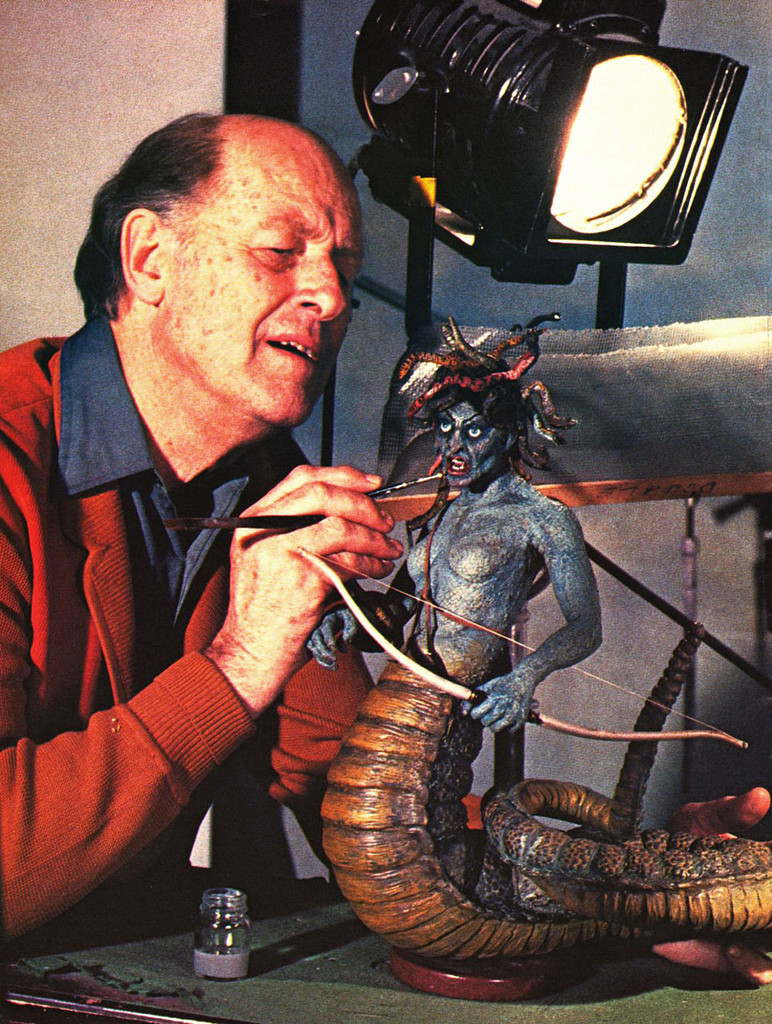 An horrible snake like creature with an hideous face. Most notable thing is the actors (not terribly good by the way) almost not move in front of her showing how they are petrified by fear. This can be put side to side with Jason's fight against the 7 headed hydra, the fact they do not really fight the Medusa was obviously a choice perfectly reflecting her monstrous and terrifying appearance.

So factually Perseus does not wear a shield to not see her gaze (she is sleeping) but because even watching her sleeping form is way too much (cf Hesiod and Ovid). That is how terrifying Medusa is.

Not the answer you're looking for? Browse other questions tagged greek mythical-creatures medusa or ask your own question.

41
Why does looking at Medusa with a mirror work?
7
Did Greeks and Romans allow for belief in only some of their gods?
3
Why wasn't Poseidon turned into stone?

22
What happened to Medusa's sisters?
41
Why does looking at Medusa with a mirror work?
15
Why was Medusa's hair made of snakes?
3
Why wasn't Poseidon turned into stone?
7
Could the weapons of the gods be used against them?
9
What did Achilles look like?
11
Could all three Gorgons turn people to stone, or just Medusa?
7
Does Medusa's head turn one's clothing to stone together with its wearer?
4
Does the cap of Hades keep one's accessories hidden?