Are there any homosexual gods?

It is difficult to find pure depiction of homosexuality. But hints and such there is. The Epic of Gilgamesh clearly illustrates that. The relationship between Enkidu and Gilgamesh if never clearly stating homosexuality makes you wonder a lot, from their first fight, when they roll on the ground intertwined, up to Enkidu's death and following Gilgamesh's mourning...

Now concerning God's and such, you have some of those clear hints in Egyptians Khnumhotep and Niankhkhnu. 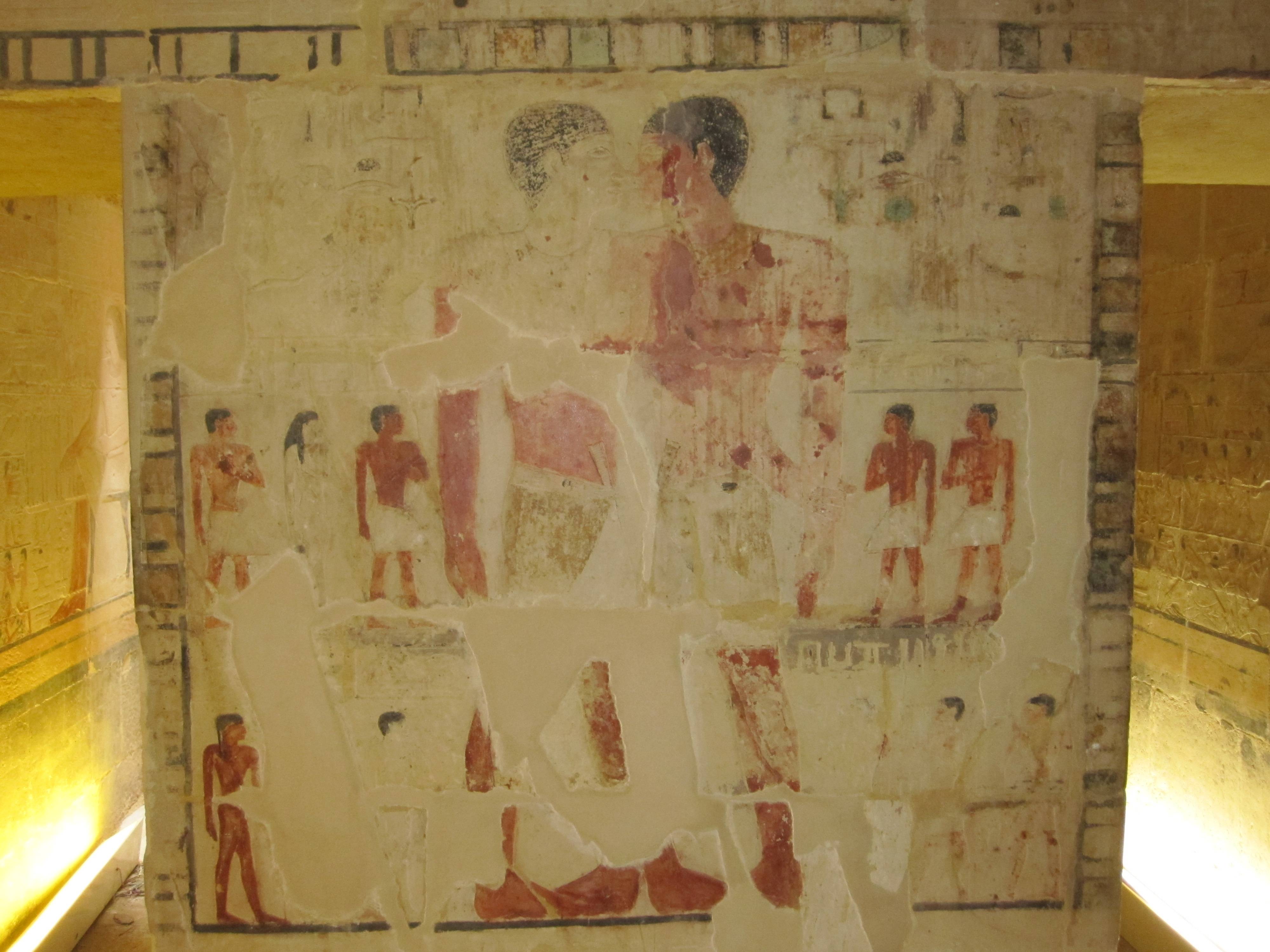 Just take a look at their portrait in their burial chamber... That is how even today either close buddies or lovers are holding. And speaking about Egypt you have one version of their Myth where Horus and Osiris have sex on the throne of Isis... You have also such a fight between Horus and Seth where they exchange semen a lot.
WARNING: I provide to you the link (no pic here) of a tablet from obvious Egyptian time depicting a very clear relation between men. Once again, click only if you want.
I could add, if you like reading old text some stories as the one of King Neferkare and general Sasenet. I provide you with a link to the story! The shortcut version is the Pharoah Nerferkare (Pepi II of the 6th dynasty... the story is from WAY after, toward the NEW kingdom,so do not mark this as a Pepi II behaviour) creeps at night to the house of his general Sasenet and goes out 4 hours after "After his majesty had done that which he had wanted to do with him".

Now in Greece... Take a look at the Illiad. Achilles is skulking all the song uptil his friend Patrocle is killed.

You have Roman God Antinous (which was a favourite of Hadrian turned into a God) which is there totally Homosexual.

In India you can find god Aravan. You have to devide the story between the Mahabarata which does not imply homosexuality and other south traditions. There Aravan propose to sacrifice himself to Kali but wants to get married, as he is not, as there is no female around (see the excuse...) Lord Vishnu takes the form of Mohini (a female version oh him). Still today they held ceremony in Koovagam to him where men are crossdressing. Note that Mohini appears in the Mahabarata but without such explicit homosexual reference, she appears as purely a female. A highly sexual female some Indian pictures are relatively very explicit on that.

In celt myth you find another "Gilgamesh-Enkidu" relationship with Cuchulainn and Ferdiad. Factually Cuchulainn is killing Ferdiad by using his spear on Ferdiad's ass... ... (Very similar to let's say Baldr's death or Achilles' death, but way more explicit on one or two things)

I don't know true example in Norse myth but, they are late enough. You find at least on example of Thor crossdressing with another bisexual figure Loki.

In China myth you find some spirits called Xian which are spirit animals generally male loving males human beings (aka men). you have such a story in the myth The Farmer and the Dragon where the dragon is falling in love with and old farmer.

In Japan you have one myth where the sun goddess Amateratsu is hiding in a cave and the goddess Ame is doing a strip tease to lure her out.

You have such a strip tease example when Babylonian/Sumerian Goddess Ishtar/Innana visits the queen of Hel Ereshkigal and removes one part of her garment at each door (strip tease) finally standing naked and powerless in front of the Queen.

Contrary to let's say rape, homosexuality is rarely depicted as clearly. but reading between the line there is everywhere. I am far from being versed enough in other's myth to say more. But I am aware of the god Chin of the Mayan culture which is another example of a God encouraging relationship between young men. I remind one of those carved wall where you have two men kissing.

I believe this link will be of interest to you. It seems that there are actually very few belief systems / mythologies that DON'T include some form of homosexuality, especially across Asia. Norse and Celtic stories don't make any mention of it, but they don't have any problems with it, as far as I know.

You could, in some ways, look at the events surrounding the conception of Loki's horse-child Sleipnir as an act of homosexuality. Loki tries to stop a frost giant from winning Freya's hand in marriage over a bet to build a wall for the gods of Asgard in the absence of Thor, the Protector. Loki, in order to stop the frost giant just as he is about to finish and win his deserved prize, shapeshifts into a horse and runs off with the giant's impressive horse, Svaoilfair. The story of how Asgard got it's wall ends 9 months later when Loki rides back to the hall of the gods on an 8 legged horse that he then gifts to Odin.

There is some general ambiguity, but this myth does more than hint that Loki conducted some form of a homosexual act. However, it could also not be, as Loki shapeshifts into, presumably, a female horse, as conception would be otherwise impossible (but then again this is Norse mythology...). So potentially, Loki may have been a homosexual god in one way or another.

13
Did Zeus have any male lovers?