In Romance of the Three Kingdoms, after Guan Yu finds out Liu Bei is still alive and with Yuan Shao, he departs Cao Cao from Xuchang and heads north, in a story known as crossing five passes and slays six generals (過五關斬六將).

Is there a map of this journey? The story gives the sense that Guan Yu headed straight towards the destination, and that the five passes happened to be on his path. Yet I suspect the path isn't so simple - for example, the most direct path from Xuchang to Yuan Shao's territory would be directly north, passing locations like Guandu and Boma, but one of the gates is Luoyang, which is to Xuchang's northwest.

I suspect that this may be another instance of the author's exaggerations in the novel.

I thought I'd do this using a mapping tool. So the map and list of locations for Guan Yu's journey (at least before he diverted for Runan) is: 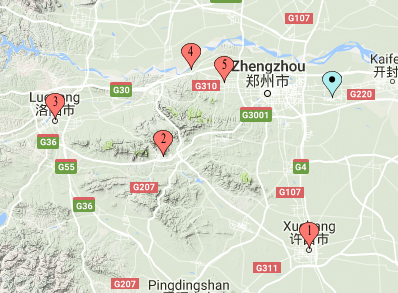 The last location is by the bank of the Yellow River, but it isn't specified where. Also for reference, Guandu is the unnumbered pin.

So the path taken is not a straight one but a great big left hook. This raises some questions:

The Yellow River is notorious for changing course but these usually occur just downstream from Zhengzhou, so the path described in the novel shouldn't be affected. It's possible that there were limited locations for ferries, and Guan Yu may have traced the coastline looking for them, but that's my pure speculation.

The Three Kingdoms Podcast talks more about this; apparently the journey's locations changed throughout retellings over the centuries prior to the novel, and perhaps the original starting point was Chang'an (in the far west), which explains the odd diversion into Luoyang. But given that all this is fictional, there's probably not much sense in worrying about the journey.

Not the answer you're looking for? Browse other questions tagged chinese romance-three-kingdoms or ask your own question.