How can a melusine manage to disguise their true appearance?

I wanted to know how could a melusine manage to hide their true appearance. How is this portrayed in the folklore? Is there a magic spell cast upon them that prevents them from exposing their true form, or are they somehow able to dress properly with some fake legs and what not (how would the legs manage to move and disguise the melusine)?

I guess this mythological figure must appear in more than one place, possibly with different renderings.

Reminds me of sexuality and other forms of disguise, which appear in modern society, as well as many other things. Interesting.

Hopefully this is the right place.

First you should not say how a melusine could do this or that. Melusine (Mélusine, there is a accent on the 'e', pronounce that like may) is a name in the same range as Medusa, Zeus, or Barrack Obama. So simply Melusine.

She appears in lots of story, But the "Roman de Mélusine" by Jean d'Arras is the best representation.

Mélusine is known from this French middle medieval book. Here is a very short summary, with original quote and personal English translation. King Elinas of Albany (ie. Scotland, not modern Albany) meet an incredibly beautiful woman Présine and marry her at the condition he never comes to see her after child birth.

So, says the woman, who was knowing pretty well that [Elinas] was in love: If you want to take me as a wife and sear that, if we have children, that you will not come to see me while I am giving birth, I will be the one who will obey to you like a loyal wife should obey her spouse. And the king sweared.

Note also that this 'de moy veoir en ma gesine" could also safely been translated by "When I have my period" which would make sense with the child bathing scene (could I insist).

Unfortunately the King has already a son Mataquas which is obviously jealous. Présine got pregnant from THREE girls at the same time. And following Mataquas advice the king go to see his wife. Original French:

[Mataquas] comes to the King his father, and says: My lady the Queen Présine, your wife, bring to you the three most beautiful girls never seen. Sire comes to see them.

One of this 3 girls is Mélusine. So you have to note that she is the daughter of a man (a King), and a obvious fae Présine which is pretty much female in appearance. The two other girls are Mélior and Palestine.

When they grow older the 3 girls decide to take revenge on their father, locking him in the Northumberland mountain. Présine, curses them for that. And here e have the passage answering your question:

But for now, I give you the gift that every saturday you will be a snake from the navel to bottom. But if you find a man who which to take you as a wife, that he promises you that he will never see you on saturday, neither he finds you, nor he says to anyone, you will live normally as a normal wife, and die normally.

So Mélusine state is the result of the curse of her own mother Présine, changing her on saturday to have sought revenge on her father. Her sisters are also punished.

She will spouse king Remondin (or raimondin, modern Raymondin), who will obviously comes to spy her (after an advice of his very own brother mentioning she could betray him) on a saturday and tells what he saw, obliging Mélusine to flee.

Here is Remondin spying Mélusine while she is bathing: 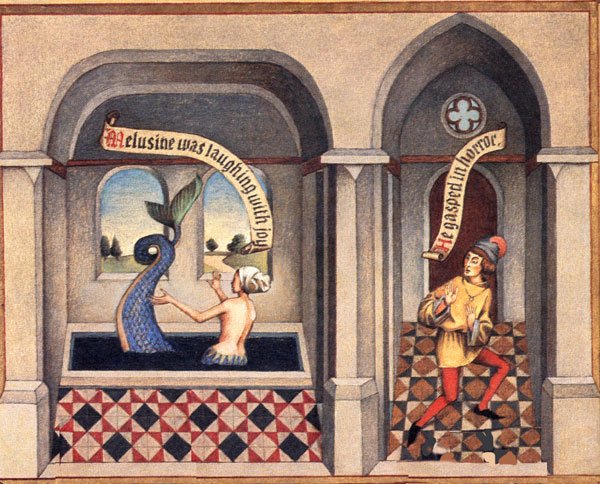 And Mélusine flying away as a monster after her betrayal (the text is: How Mélusine fly from Remondin in the shape of a snake of the castle of Lusignan by a window) - I picked this one cause it is totally ugly (drawn by a 2 years old monk): 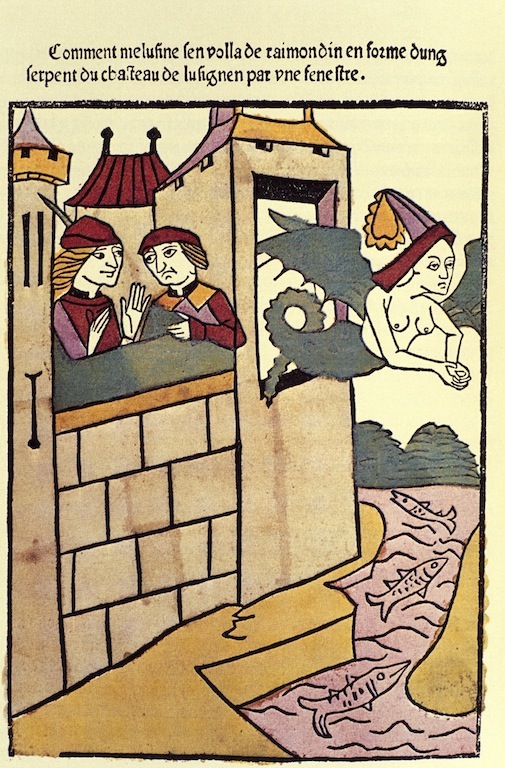 Not the answer you're looking for? Browse other questions tagged mythical-creatures folklore or ask your own question.

10
What was the first example of a “Only true love can awake” in folklore?
6
Where does it says that snakes can kill birds by looking at their shadow?
5
Can succubus be loyal to her lover?
10
How Do The Fairies In Irish Mythology Spend Their Time
0
What is the earliest known appearance of a hero's greatgrandparent in folklore?
2
Can kitsune die/be killed?
3
Can Vampires Take Form of Nocturnal Animals?
4
Are there any myths of Gods or Goddesses giving up their divinity permanently of their own free will?