Does Hercules have a tail?

I was astonished when I saw these two tapestries in a museum: 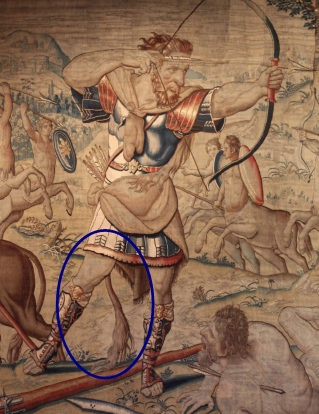 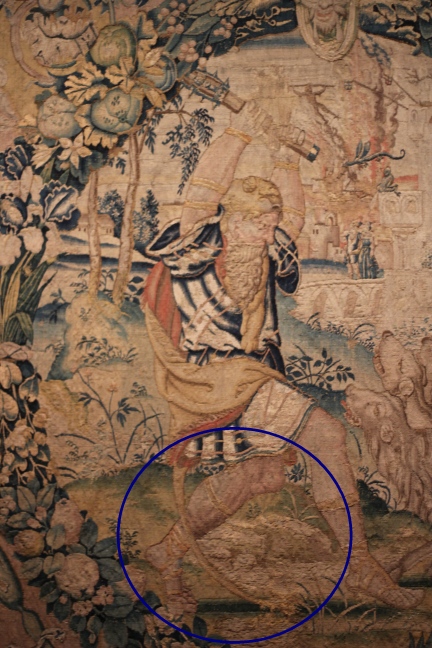 In both of them Hercules/Heracles seems to have a well defined tail with a wisp of longer hair at its end. I went to Wikipedia and confirmed this in two other images: 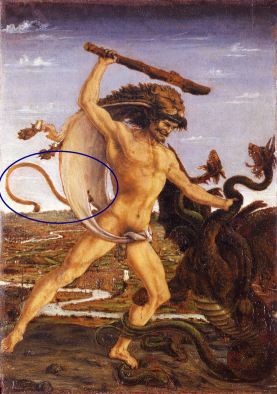 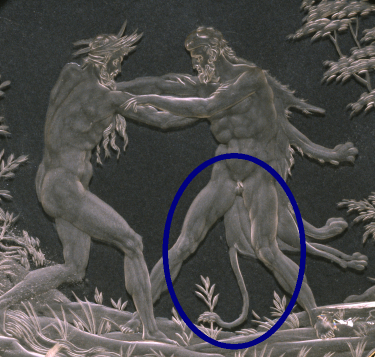 This made me question:

The first of Hercules' labors was to kill the Nemean lion. Hesiod, in his Theogony, wrote

Nemean lion, which Hera, the good wife of Zeus, brought up and made to haunt the hills of Nemea, a plague to men. There he preyed upon the tribes of her own people and had power over Tretus of Nemea and Apesas.

Apollodorus, in Library, describes how Hercules killed the lion after attempts to shoot it:

And having come to Nemea and tracked the lion, he first shot an arrow at him, but when he perceived that the beast was invulnerable, he heaved up his club and made after him. And when the lion took refuge in a cave with two mouths, Hercules built up the one entrance and came in upon the beast through the other, and putting his arm round its neck held it tight till he had choked it; so laying it on his shoulders he carried it to Cleonae.

It is well known (see e.g.Theocritus' Idylls) that Hercules then wore the lion's skin as protection - after all, it was impenetrable, and thus made for sound body armor. He did not attempt to fully dismember the body, though; in the final image, you can see the skin from its arms and legs sticking out his back.

That's the tail of the Nemean Lion, which Hercules killed as a part of his first task for King Eurystheus in absolution for killing his wife and children (due to the manipulation of the goddess Hera). Hercules then skinned the lion and used this skin for a cloak, as it was impervious to mortal weapons (part of the reason why it was so hard to kill).

Not the answer you're looking for? Browse other questions tagged greek symbolism hercules or ask your own question.

20
Was there a cult of Hercules in Germania?
7
Did Hercules complete his labors as described in the 2014 movie "Hercules"?
11
Do we know how Hercules avoided the Hydra's venomous breath?
5
Goods reads about Herakles/Hercules twelve labors?
7
Why does Hercules light himself on fire?
6
What is the meaning of Hercules' self-immolation?
12
What happened to Prometheus after Hercules freed him?
5
Why did Hercules murder his first wife?
6
How did Hercules kill the lion without being clawed to death?
4
Which of these heroes lived first: Achilles, Hercules or Theseus?