Why do Ethiopians play gena on Christmas?

Where does this tradition come from?

What are the origins of the Ethiopian Christmas day game of Gena?

It is Ethiopian tradition that the country was converted to Christianity during the time of the Apostles. We see in Acts 8: 26-40 that the Apostle Philip baptized a prominent Ethiopian eunuch, who in turn was believed to have evangelized his home country of Ethiopia.

We believe that Ethiopia turned to Christianity during the time of the Apostles, certainly we can prove it came at the start of the 4th century when the cross of Christ appeared in Axum . This means that Ethiopia could have celebrated Christmas from the beginning, meaning that it was an age old custom.

How is Christmas celebrated in Ethiopia?

The celebration of Ethiopian Christmas is marked by various activities such as horse racing and authentic folk dancing. At Lalibela, Genna is celebrated in very attractive ways due to the birth date of King Lalibela being on a similar day. In the rural areas a popular game which looks like European Hockey but is typically Ethiopian is conducted between two youth teams. The game is named after the festival and is called "Yegena Chewata". - Genna or Ethiopian Christmas

And now for the origins of the game.

The game, which looks a little bit similar to hockey, has been played for centuries, according to ancient manuscripts. The exact time of its origin is, however, not known.

Ye-gena chewata is played by using a crude hockey stick, "Gena", and some kind of a small wooden ball, "enkura". Men and young boys participate in the game. But it is only rarely that the rivalry can be fierce.

In relation to the origin of the game, there are different legends which have been related from one generation to another. Solomon Getachew, vice president of Cultural Sports and Festival bureau, says that when Jesus Christ was born, the news was heard all over the world and when the shepherds heard it they started jumping with joy and throwing things around and that's how the game was started.

The other myth which seems horrific is that when the "Sebasegels", the three Melchior King of Arabia, Caspar the King of Tarsus and Balthazar King of Ethiopia, led by the star, found out that Jesus was born, on their journey back from Bethelhem, the birthplace of Jesus Christ, they found a man who denied the birth of the Savior. Disappointed by his denial, they beheaded the man and played with his head. - Ethiopia Cultural Sports: Reviving Ye Gena Chewata 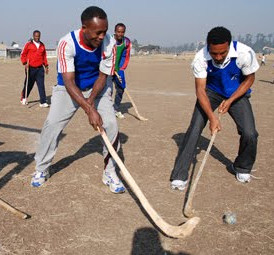 Here is a nice YouTube video in English on the subject: Genna | Ancient Ethiopian Sport on Trans World Sport (YouTube).

Not the answer you're looking for? Browse other questions tagged africa christmas traditions games or ask your own question.

13
Why doesn't Mukiti want Mwindo to visit his aunt?
9
Why did Unkulunkulu send the lizard after the chameleon?
7
What is the connection between Asherah and the custom of Christmas Trees?
4
Is there a myth that explains Senet's origins?
2
Are There Pagan Roots of Christmas Traditions?
7
Why do we kiss under the mistletoe?
4
Why are poinsettias associated with Christmas?
7
When and why did necromancy became a bad thing?
4
The interruption of the duel in the Iliad
5
What is the origin of a common Christmas tree quotation concerning an old Babylonish fable about an evergreen tree?