What is the name of the lake in Frogs?

In Aristophanes' Frogs, Dionysus crosses a lake to reach Hades. The lake is where we first (and last) meet the eponymous frogs of the play, and Aristophanes does not name it. We do know, however, that it's the same lake Herakles crossed on his twelfth and final labour: bringing Cerberus back from the underworld.

Do we know the name of the lake? Do we know where it might be located? Does any of the Herakles stories give out any details about it?

It's probably Lake Lerna, a real (former) lake in the Argive plain. You might also know this lake from the Lernaean Hydra, the killing of which was one of Heracles' tasks.

The lake has disappeared now, but here was its approximate location. (Taken from Wikipedia.) 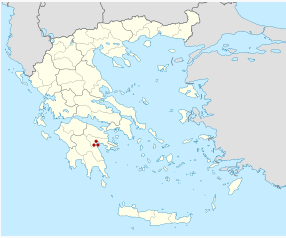 Smith's Dictionary of Greek and Roman Geography sums ups its relationship to this myth:

The grove of Lerna contained two temples, in one of which Demeter Prosymna and Dionysus were worshipped, and in the other Dionysus Saotes. In this grove a festival, called the Lernaea, was celebrated in honour of Demeter and Dionysus. Pausanias also mentions the fountain of Amphiaraus, and the Alcyonian pool (ἡ Ἀλκυονία λίμνη), through which the Argives say that Dionysus descended into Hades in order to recover Semele. The Alcyonian pool was said to be unfathomable, and the emperor Nero in vain attempted to reach its bottom with a sounding line of several fathoms in length. The circumference of the pool is estimated by Pausanias as only one-third of a stadium: its margin was covered with grass and rushes. Pausanias was told that, though the lake appeared so still and quiet, yet, if any one attempted to swim over it, he was dragged down to the bottom. Here Prosymnus is said to have pointed out to Dionysus the entrance in the lower world.

If you're wondering why Dionysus would have to cross a lake to get to the Underworld, the Greeks actually believed that many freshwater bodies of water descended down to Hades (many of which connect there).

You can read about some of the reasons for this in Julie Baleriaux's paper she gave at the Penn-Leiden Colloquium a couple years ago: Diving into the underground: Poseidon Hippios and the Arcadian Landscape

Others as early as the Suidas have put forth Acheron as river, which is possible, but I don't think it's likely considering Acheron is mentioned separately in the play (line 471). You'll run into people suggesting it, though.