How and why was Talos killed?

In Greek mythology there was this ancient robot like (or god like) creature named Talos who was responsible for protecting Crete. 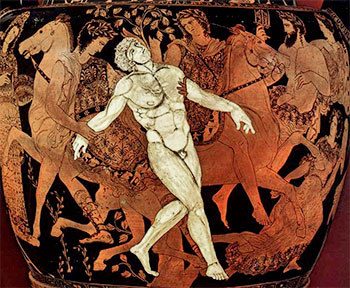 In the Image above we can see depicted the death of Talos. But who killed him? How and why was he murdered?

When the Argonauts reached Crete, Talos - the bronze guardian of Europa - managed to push them back to the sea with ease. The Argonauts were desperate for food and water, and Medea decided to use her magic to kill Talos. She "sent forth baneful phantoms" and as Talos was trying to stop them from reaching Dikti (Europa's hideout), he accidentaly "grazed his ankle on a pointed crag", releasing the ichor from his single vein.

Here's the story, as told in Argonautica:

And Talos, the man of bronze, as he broke off rocks from the hard cliff, stayed them from fastening hawsers to the shore, when they came to the roadstead of Dicte's haven. He was of the stock of bronze, of the men sprung from ash-trees, the last left among the sons of the gods; and the son of Cronos gave him to Europa to be the warder of Crete and to stride round the island thrice a day with his feet of bronze. Now in all the rest of his body and limbs was he fashioned of bronze and invulnerable; but beneath the sinew by his ankle was a blood-red vein; and this, with its issues of life and death, was covered by a thin skin. So the heroes, though outworn with toil, quickly backed their ship from the land in sore dismay. And now far from Crete would they have been borne in wretched plight, distressed both by thirst and pain, had not Medea addressed them as they turned away:

"Hearken to me. For I deem that I alone can subdue for you that man, whoever he be, even though his frame be of bronze throughout, unless his life too is everlasting. But be ready to keep your ship here beyond the cast of his stones, till he yield the victory to me."

Thus she spake; and they drew the ship out of range, resting on their oars, waiting to see what plan unlooked for she would bring to pass; and she, holding the fold of her purple robe over her cheeks on each side, mounted on the deck; and Aeson's son took her hand in his and guided her way along the thwarts. And with songs did she propitiate and invoke the Death-spirits, devourers of life, the swift hounds of Hades, who, hovering through all the air, swoop down on the living. Kneeling in supplication, thrice she called on them with songs, and thrice with prayers; and, shaping her soul to mischief, with her hostile glance she bewitched the eyes of Talos, the man of bronze; and her teeth gnashed bitter wrath against him, and she sent forth baneful phantoms in the frenzy of her rage.

Father Zeus, surely great wonder rises in my mind, seeing that dire destruction meets us not from disease and wounds alone, but lo! even from afar, may be, it tortures us! So Talos, for all his frame of bronze, yielded the victory to the might of Medea the sorceress. And as he was heaving massy rocks to stay them from reaching the haven, he grazed his ankle on a pointed crag; and the ichor gushed forth like melted lead; and not long thereafter did he stand towering on the jutting cliff. But even as some huge pine, high up on the mountains, which woodmen have left half hewn through by their sharp axes when they returned from the forest—at first it shivers in the wind by night, then at last snaps at the stump and crashes down; so Talos for a while stood on his tireless feet, swaying to and fro, when at last, all strengthless, fell with a mighty thud. For that night there in Crete the heroes lay; then, just as dawn was growing bright, they built a shrine to Minoan Athena, and drew water and went aboard, so that first of all they might by rowing pass beyond Salmone's height.

According to Ancient Origins Talos is:

According to the legends, Talos was not a human being but a creature made by Zeus himself. Another version of the myth attributes his creation to Hephaestus, the god of fire and iron. In other versions, Talos was the son of Cres and the god Hephaestus.

It goes on to say that

Talos protected Crete for many years until he was finally defeated by Jason and the Argonauts, and not by any kind of weapon, of course, but by trickery. When Jason and the Argonauts approached Crete, Medea, the sorceress, occupied Talos by talking to him and using spells, persuading him to remove the nails from his ankles. Thus the liquid metal spilled out and Talos died.

So you could say that Talos bled to death. He was constucted out of metal and the blood in his veins was also liquid metal. Without it Talos died.

17
Was Talos an intelligent machine?
8
Are there any ancient myths about adventuring parties?

15
What was the explanation in Greek mythology for the absence of their deities?
17
Was Talos an intelligent machine?
6
Differences in the Greek and Roman portrayals of Cronos/Saturn
8
How did Christianity come to equate the place of punishment and the place of demons?
10
How did Pan die?
5
How did Perseus die?
0
What are some differences between Ares and the amazons in the 2017 film Wonder Woman and the actual mythology?
4
Why was the Greek deity of warfare and wisdom (Athena) female, and how did the Greeks rationalize this?
3
Is there any pre-modern attestation for Telephassa being a daughter of Nephele by the River Nile?
3
How does Glaucus know Patroclus killed Sarpedon?