What was the role of the bear in Norse mythology? (Are there bears in Asgard?)

The Norse æsir gods had animal helpers, but did anyone of them have a bear? Have bears been found in graves, like dogs and horses et cetera? Are there Norse illustration of bears?

Some Norse warriors were called berserks because they wore the fur of bears. And fur from bears was an important export good.

Is it lost in the tradition because there never were any bears on Iceland? And absent from archaeology because one couldn't sacrifice a wild animal that one doesn't own.

But while the wolf was an as dangerous animal, it was semi-domesticated and Odin owned wolves. Am I just missing alot of references to bears in Asgard, or did the bear have a different kind of role to play than other animals?

You raise a really good point. It is strange that there are no bears in Norse myth. The wolf seems to have really engaged them, perhaps because of the duality of wolf/dog, tame and wild, while the bear to them was totally wild.

I wonder if @LocalFluff isn't on to something, because berserks were seen as totally outside society, too unpredicatable and dangerous to have around. (In Egils saga Skallgrim kills a servant when the berserker rage descends on him, and nearly kills his son.) A wolf could become a dog, but you can't tame a bear and put it to use or have it as a pet.

By the way there were a kind of berserkers, ulfhednar, who turned into wolves, although you don't hear so much about them.

PS - The Lewis chessmen include berserks, biting their shields.

Bears do not feature much in Norse mythology, at least when it comes to the stories involving the gods. The one story I can think of which even mentions them is how Gleipnir, the chain that fettered Fenrir, was made: one ingredient was the "sinews of a bear", together with several more fantastic items, such as the breath of a fish.

However, they do appear in other stories: in the story of Hrólf Kraki, the hero Bödvar Bjarki (the norse version of Beowulf) is asleep during a great battle, but it turns out that there is a great bear fighting in his stead. When he is woken up, the bear disappears. This is told in the Bjarkamál.

As for art, the only thing I can think of is some Vendel era metalwork, which contains what looks like a bear-man: 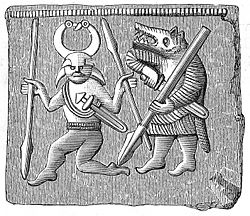