Virgin goddesses outside of the Greek and Roman traditions?

The Greeks and Romans seem to have had something of an obsession with virgin goddesses, which seems somewhat counter to pagan traditions in general. Who are some virgin goddesses not from Greek or Roman mythology?

Well, christianity is kinda famous for being considered non-pagan (at least by christians) and Mary being chaste. She is not technically a goddess, but is a mother to their God.

The Kumari The Virgin Goddess should be a plausible answer to your question! Whether this is a good fit here, it does remain interesting.

The ancient practice of Kumari worship is vigorously alive today, deep in Nepal's Kathmandu Valley. A young virgin girl, Kumari, is selected as the embodiment of Goddess Taleju. A Kumari's dharma is to serve and bless the people. Her brief reign is a time of discipline and personal sacrifice.

Among the most ancient of Hindu practices, Kumari puja (virgin worship) dates back at least 2,300 years to the late Vedic period. - Nepal's Virgin Goddesses

The Kumari, according to the Wikipedia article is a real living virgin goddess:

Kumari, or Kumari Devi, or Living Goddess – Nepal is the tradition of worshipping young pre-pubescent girls as manifestations of the divine female energy or devi in Hindu religious traditions. The word Kumari is derived from the Sanskrit Kaumarya, meaning "princess".

In Nepal, a Kumari is a pre-pubescent girl selected from the Shakya caste or Bajracharya clan of the Nepalese Newari community. The Kumari is revered and worshiped by some of the country's Hindus as well as the Nepali Buddhists, though not the Tibetan Buddhists. While there are several Kumaris throughout Nepal, with some cities having several, the best known is the Royal Kumari of Kathmandu, and she lives in the Kumari Ghar, a palace in the center of the city. The selection process for her is especially rigorous. As of 2010, the Royal Kumari was Matina Shakya, aged four, installed in October 2008 by the Maoist government that replaced the monarchy. Unika Bajracharya, selected in April 2014 as the Kumari of Patan, is the second most important living goddess.

In Nepal a Kumari is generally chosen for one day and worshipped accordingly on certain festivals like Navaratri or Durga Puja. In Kathmandu Valley this is a particularly prevalent practice.

In Nepal, a Kumari is believed to be the incarnation of Taleju. When her first menstruation begins, it is believed that the goddess vacates her body. Serious illness or a major loss of blood from an injury are also causes for loss of deity. - Kumari (goddess) 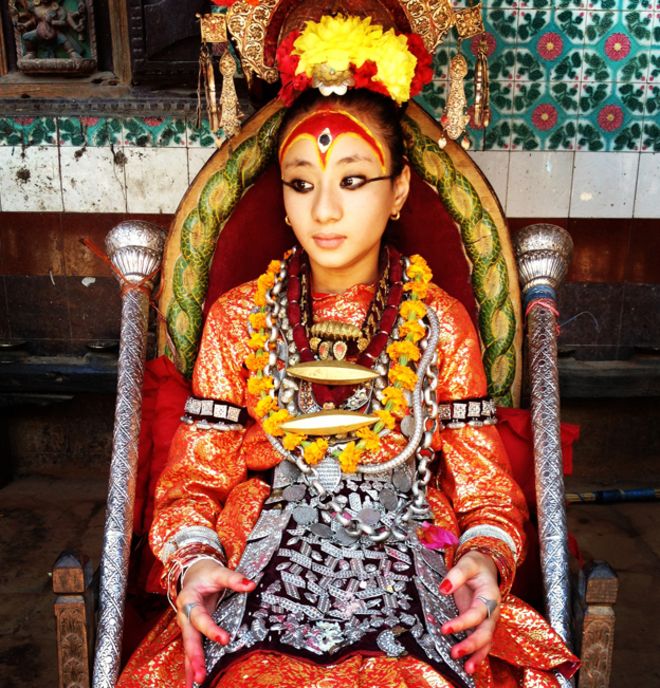 Samita Bajracharya is a 12-year-old Nepalese girl who lives with her family, studies hard, and enjoys playing a Nepali version of the lute. But until recently she was also worshipped by people who believed she was a reincarnated goddess. - Nepal's living goddess who still has to do homework

Not the answer you're looking for? Browse other questions tagged myth-identification maiden-goddesses or ask your own question.

21
Who invented writing, or who taught writing to the mortals, according to Greek myths?
13
What is this myth: elderly couple unwittingly feed gods, changed into tree
7
Etymology of "charming" ("Encantadora" in spanish) seeing from the Greek mythology point of view
6
Battle between the Sun and the Moon forces?
11
What humanoid gods have had skin colors other than that of the people who worship them?
6
Mythological figures "with" REAL(?) amputation-like or paralysis features
7
What are some iconic legends of human depravity and spiritual pollution?
6
Why did Apollo trick Artemis into killing Orion?
5
The Great Bear and Dragon encircling the Tree of Life
8
What is the legend of the Knight Tondalo?