What deities/creatures personify the universe in the aspect that it manifests as varied duplexity (that serve the same symbolic function as Yin/Yang)?

I'm looking for deities or mythological creatures that symbolize the universe in the aspect that it manifests as a duality (which is for example symbolized by the Yin/Yang), but as a fictional organism/spirit rather than a plain symbol, an example would be Eliphas Levi's Baphomet who is an organism of united polar opposites (female/male, man/beast, angel/demon, good/evil).

Do any deities or creatures like that exist apart from Baphomet?

Dionysus is a great place to start—Baphomet is almost surely based, in part, on this figure.

Regarding gender, it's notable that gender reversal were part of the Dionysian Mysteries, appearing in such forms as transvestism and the female maenads taking on masculine attributes such as strength, ferocity, and freedom to roam. The Bacchae of Euripides is a very important source work. (At its core, the play is a commemoration of the dismemberment and his subsequent resurrection of the god, but even the Wikipedia summary provides a good sense of binaries dealt with in the play, primarily the tension between intellect and instinct, but also the dual nature of Dionysus himself.)

Persephone is, in some sense, the female counterpart to Dionysus. She represents grain (body), where he represents wine (spirit).

Graves translates "Persephone" as "Bringer of Destruction": "πέρσε" + "φονή", although the second word, with an omega for the omicron, "φωνή" relates to sound, thus Persephone can also be understood as "She who robs (people) of their voice" (i.e. death) and by extension, life, as voice requires breath, and breath is literally spirit in psuke, pneuma, and the root of the Latin "anima"

Persephone is sometimes considered the mother of the primal form of Dionysus, and/or the nymph Melinoe, however, the sources are cloudy, originating from the "mysteries", and can be considered corollary. Even so, the binary of infertile/fertile can be represented by possible status as mother.

Eros is also certainly in this category, being thought of, alternately, as both the oldest and youngest of the gods. In the philosophical conception of Aristotle, drawing on Hesiod, Eros the principle (love, desire) is said to be quite specifically the "origin" of "all things that exist". Thus Eros embodies a binary (oldest/youngest) and presides over the unification of opposites (generation through unification of the sexes). Hesiod was drawing on ideas that would now be understood as combinatorics.

These deities are understood to be liminal, although the current Wikipedia entry on liminal deities is quite limited in scope, being concerned only with deities who literally preside over thresholds, as opposed to deities who actually embody oppositional qualities which form the thresholds they straddle.

Loki is a distinctly liminal figure:

Loki tricks the giant who builds the walls of Asgard, and becomes female to bear Sleipnir (Gylfaginning), but he also is responsible for the death of Baldur, and is the central agent of Ragnarök which is a transition.

Loki is "bright" in the sense of cleverness, but also "dark" in the sense of spite. (It's probably not random that his punishment involves venom, and it's also possible that his name partly derives from the Indo-European root for light.)

Those are my favorites, but embodiment of such binaries can be seen in:

Two faces. Represents past/future, as well as other transitions.

Part animal, part human. Remover or placer of obstacles (facilitating or obstructing transitions). Literally a guardian of thresholds in that, in some version, he stood guard by his mother's door and refused to allow Shiva entry.

Both vegetable and human. Intersection of the mind and nature. Crowley's "The Fool" [See below] references the Green Man, who is very specifically straddling the body of the image, which may be interpreted as the phenomenal world, and also incorporates horns and a distinctly animalistic visage.

Both god and man. Gateway to salvation. The cross, or "crux" is a literal representation of intersection.

These are just a few, famous examples, but the concept of liminality is central to all such figures. 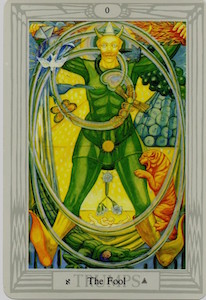 Not the answer you're looking for? Browse other questions tagged mythical-creatures myth-identification symbolism or ask your own question.

8
Why does the astrology sign for cancer seem to represent a yin and yang?

0
Are there any deities that personify realms other than the earth or sky?