What did Danae want?

It's well known the story of Acrisius and Danae; Acrisius wants male children, and the oracle says he won't have any, but he'll have a grandson who kills him. So he locks Danae up in a prison, and Zeus impregnates her with a golden shower. Apollodorus 2.4.1:

When Acrisius inquired of the oracle how he should get male children, the god said that his daughter would give birth to a son who would kill him.49 Fearing that, Acrisius built a brazen chamber under ground and there guarded Danae.50 However, she was seduced, as some say, by Proetus, whence arose the quarrel between them51; but some say that Zeus had intercourse with her in the shape of a stream of gold which poured through the roof into Danae's lap. When Acrisius afterwards learned that she had got a child Perseus, he would not believe that she had been seduced by Zeus, and putting his daughter with the child in a chest, he cast it into the sea. The chest was washed ashore on Seriphus, and Dictys took up the boy and reared him.

But my question is, what did Danae want? Did she want to mate with Zeus, or was she raped? Did she go in her prison willingly or voluntarily?

I do realise this may be more about history / sociology than about mythology per se...
I'm not really sure there is an actual answer to this, as a girl was subject to what her father (or later in life her husband) decided and her job was to comply.

Rape was not so much a crime against a woman as it was against her father or husband. In many of the myths, the author is utterly unconcerned with what the female characters want, feel or desire.
A notable exception is made when it comes to goddesses.

But my question is, what did Danae want? Did she want to mate with Zeus, or was she raped? Did she go in her prison willingly or voluntarily

It is a myth, within a culture where a woman was subordinate to the man, if not property of the man. Creating a personality for Danae means giving her an age. She was probably incarcerated at the signs of puberty. Would a child of 12 voluntarily go to prison, or decide to be pregnant?

Now if golden rain is rape its another story. If the rain passing through the cracks became a man, who knows? the poor child might be so happy to see a face that she would fall in love.

Distracted by the Shine

Starting at least in the 1st century BC, a standard interpretation of this story has been that Danae granted Zeus her favours in exchange for gold, i.e. she was seduced by the offer of money.

Recorded in the Greek Anthology, Parmenion might be earliest example of an author who contrasts the possibility of rape with the idea that it was a consensual trade when he says, addressing Zeus in AP 5.33 = GPh 1:

You flew like gold rain to Danae, Olympian, so that the girl
would be won over by the gift, and not tremble before Cronides ["Cronus' Son"].

the god Jove [i.e. Jupiter, the Roman Zeus] showed her wealth and tricked with gold one he had been unable to trick by force.

Fast-forward to the 1500s AD, about a millennium later, and the Italian poet Giovanni Andrea dell’ Anguillara provides the first instance I have been able to find of Danae's emotional state upon meeting Zeus. According to Cathy Santore's 1991 article "Danaë: The Renaissance Courtesan's Alter Ego,"1

When Anguillara retells Ovid's Metamorphoses he takes the liberty of embellishing the tale to suit his fancy. He puts Danaë first in a garden then a loggia and finally in her room where Jove appears in bodily form. Her first reaction is to flee, but the god sweet talks her and shows her so much gold that he finally got what he wanted...

Several tragedies and comedies entitled Danae were written in ancient times, featuring the character in question. All of them are now either completely lost or survive only in fragmentary form. Certain scholars seem to think that the remains of these plays might reveal a version of the tale in which Danae suffers an assault by Zeus.

In the 300s BC, Eubulus wrote a comedy entitled Danae. Maria Kanellou says2 that in Fragment 22 K-A of this play:

it is most probably Danae who complains, after her rape, of Zeus’ merciless brutality (ὅς με κλάουσαν τότε | οὐκ ἠλέησεν, ‘who did not show mercy to me when I was crying’).

According to Ioanna Karamanou the "fragment presents Danae as complaining of being a victim of cruelty" and that:

It has been widely supposed that the incident to which Danae is referring is her rape by Zeus. I think that such an interpretation is plausible, considering that it is Zeus whom she blames for her misfortune in fr. 47a. 783-4 R. of the Dictyulci... and who is also the addressee of her plea in Simonides’ poem.3

This would be more conclusive except for the fact that we do not actually know for sure who is speaking here or what s\he might be referring to, nor even the precise context thereof.

The Dictyulci ("Net-Haulers") to which Karamanou refers is yet another fragmentary comedy, this one a satyr-play by Aeschylus. We have a much better idea of what is going in it than in Eubulus' Danae (since its fragments are bigger).

In the referenced passage, Danae and her little son Perseus have landed on the island of Seriphos and are being harassed by the god Seilenus and his gang of Satyrs. Terrified, Danae prays to Zeus for help, "for you were guilty of the greater fault, but it is I who have paid the full penalty. I call upon you to set things right!"

Rather less regarding forcefulness or precious metal, Daniel Ogden goes more into the question of Danae's actual feelings in his 2008 book Perseus (Routledge: Taylor & Francis Group, London & New York). On p. 18 he notes that Pherecydes of Athens

is the earliest source to describe Zeus' access to Danae in any detail. He implies that Zeus... transformed himself into golden rain merely for the purpose of getting through the skylight, but then reverted to humanoid form in order to have sex with the girl (Pherecydes FGH 3 fr. 26 = fr. 10 Fowler)... But the remainder of the literary sources imply that Zeus retained the form of golden rain to flow directly into Danae's loins, as a sort of golden sperm... And this indeed is the way artists liked to portray the scene, with a shower of golden rain heading straight for Danae's lap (LIMC Danae nos. 1-39, the earliest of which dates from ca. 490 BC). But for all that he impregnated her in the form of pure seed, Danae was evidently not denied sexual pleasure in the congress. In many images, from the mid-fifth century onwards, she actively welcomes the seed into her lap by holding her dress out of the way to receive it (LIMC Danae nos. 7, 8, 9,✭ 19, 26, 33) or alternatively uses the folds of her dress to collect it (LIMC Danae nos. 5, 10, 12, 31). In some her head is actually thrown back in ecstasy (note especially the mid-fourth-century BC chalcedony intaglio, LIMC Danae no. 11).✭✭ 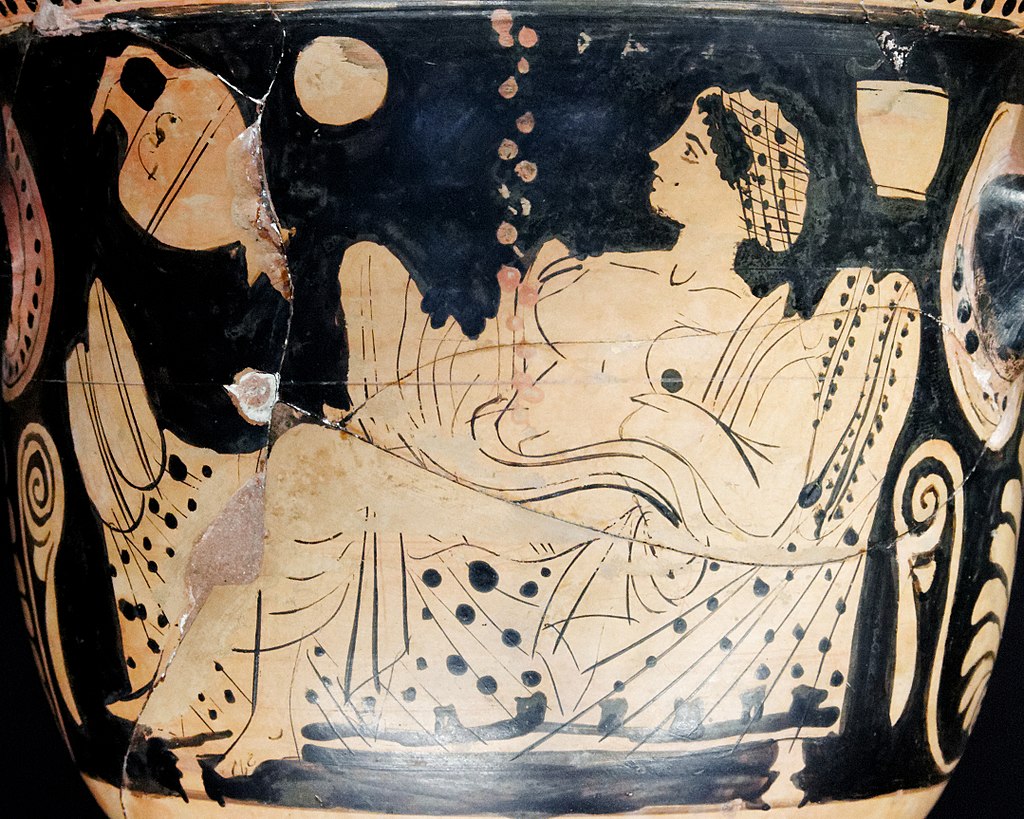 ✭ Ogden inserts a reference here to a drawing of this vase (above), appearing on p. 14 of his book. 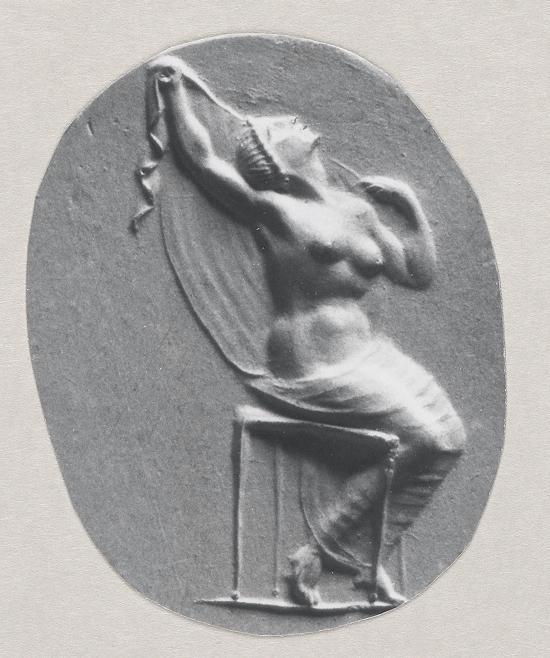 Ogden also, however, briefly considers (on p. 15 of his book) the sole significant scrap of Sophocles' tragedy Danae which has survived the ravages of time: Fragment 165.

Amongst the fragments of the Danae we may find Acrisius' voice in the phrase, 'I don't know about the rape. But one thing I do know is that I am done for if this child lives'...

Quoting the text in its original Greek, Karamanou comments4 that:

Odgen is rather loosely paraphrasing when he uses the word "rape", though, which is how he has translated πεῖραν (peîran), which simply means "attempt" or "trial", such as in Hugh Lloyd-Jones' translation: "I do not know what you mean by an 'attempt'".5

From the narrative context, it seems very reasonable, as Ogden and Karamanou both say, that it is most likely Acrisius here speaking about the young boy Perseus. As for the matter of the πεῖραν, however, it is certainly speculative to conclude that this "attempt" must mean "rape." It perhaps is what Sophocles meant by it, but we have nothing apart from that conjecture to lean on in this case.

As to whether Danae would have gone into her sequestration willingly or otherwise, the ancient sources leave us with even less material than we have for the subject of choices in her encounter with Zeus. In other words, they say pretty much nothing on the issue, and we are left to speculate based on whatever our own sentiments about this might be.

I would guess that Danae was none too enthusiastic about being locked up. Moreover, with the heavy emphasis—throughout the story's coverage since ancient times up until the Renaissance—upon the idea that Zeus paid Danae in gold currency in order to obtain his desire, one might wonder what a prisoner like Danae could need money for.

The only answer I could come up with is that she wished to attempt an escape using these funds. And as it so happens, this is the same conclusion arrived at by the earliest source I have come across for an answer to this part of your inquiry, namely Giovanni Boccaccio's Genealogy of the Gods of the Gentiles (whose first version was completed in 1360 AD). In Book 2, Ch. 33 of this work, Boccaccio cites a certain Theodontius, saying that, according to him:

Danaë, being loved by Jove, and knowing that out of fear her father had condemned her to perpetual imprisonment, in order to escape and secretly take flight, made a bargain with Jove at the price of intercourse with him.6

According to Wikipedia, Boccaccio's Genealogy quotes this Theodontius extensively but he "is otherwise almost unknown... Some authorities think Boccaccio invented him. Carlo Landi argued... that Boccaccio's Theodontius was a Campanian philosopher, from between the 9th and 11th centuries."

2. The quote is taken from p. 264 of Greek Epigram from the Hellenistic to the Early Byzantine Era, Edited by Maria Kanellou, Ivana Petrovic, & Chris Carey (2019), Oxford University Press, United Kingdom.
The relevant section is Ch. 15 of this book (pp. 249-271), written by Kanellou, and entitled "Mythological Burlesque and Satire in Greek Epigram—A Case Study: Zeus’ Seduction of Danae."

3. From p. 19 of her January 2005 Doctoral Thesis "A Commentary on Euripides' Danae and Dictys" in University College London's Department of Greek and Latin, Published by ProQuest LLC, 2013, Ann Arbor, MI.

31
Why did Zeus assume so many different forms for seduction?
15
What happened to Metis after the birth of Athena?
7
Has Poseidon ever won a dispute with another Olympian?
7
Who was the goddess, pregnant with Zeus' child or children, who was denied sanctuary?
9
Why did the Trojans believe Cassandra's recognition of Paris?
6
Would the gods often take the form of another god?
4
Why would Athena fear Poseidon?
4
Was Plutus the son of Pluto and Proserpina?
0
Was Gaea more evil than her daughter, Rhea?
5
Why was the goat Amalthea such a dreaded animal?