Roman - exactly what did they think the Sun was?

I can find a few references here and there to it being a chariot or something, but I don't just want to take any old lackey on the Internet's word for it. What exactly did they think it was?

This probably comes closest but Helios seems to be more on the Greek side and this is an often-cited thread on Apollo, but neither specifically answers my question :P

Pseudo-Hyginus, Astronomica 2. 13 (trans. Grant) (Roman mythographer C2nd A.D.) : Sol [was the] first among the gods made use of the quadriga [4 horsed chariot]."

A quadriga (Latin quadri-, four, and iugum, yoke) is a car or chariot drawn by four horses abreast (the Roman Empire's equivalent of Ancient Greek tethrippon):

and you see in this image, it is most definitely a chariot. 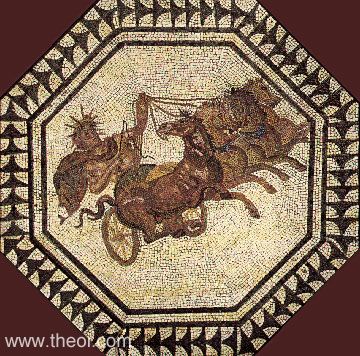 Ok, it was a chariot. Where's all that light and heat coming from?

He seems to have some sort of diadem, helmet, or whatever.

Valerius Flaccus, Argonautica 4. 90 ff (trans. Mozley) (Roman epic C1st A.D.) :
"Sol [Helios the Sun] puts on his diadem of myriad rays and the corselet woven of twelve stars [the zodiac constellations] and bound by the belt which athwart the rain-clouds shows for men its many hued bow."

Nonnus, Dionysiaca 38. 90 ff (trans. Rouse) (Greek epic C5th A.D.) :
"He [Helios] placed the golden helmet [of the Sun] on Phaethon's head and crowned him with his own fire, winding the seven rays like strings upon his hair, and put the white kilt girdlewise round him over his loins; he clothed him in his own fiery robe and laced his foot into the purple boot, and gave his chariot to his son."

You can also see the diadem in the mosaic.

Not the answer you're looking for? Browse other questions tagged roman sun or ask your own question.

16
What exactly did Apollo do with respect to the Sun?
10
Was Apollo the sun god in Augustan Rome?

16
What exactly did Apollo do with respect to the Sun?
32
Where did the Roman gods live?
4
Is there a myth of someone living in the sun?
10
Was Apollo the sun god in Augustan Rome?
6
Was Apollo the exact same in Greek and Roman mythology?
10
Why can't vampires walk in the sun?
2
Did the Trojans worship the gods by their Greek or Roman names?
6
When was a pair of Greek and Roman gods first identified?
3
Did the Romans and Greeks worship the sun as their sun god?
4
What do we know about the Roman goddesses Adeona and Abeona?