How does the Devil come to be horned?

One of the most popular depictions of the Christian Devil is having horns. From whence does this derive? 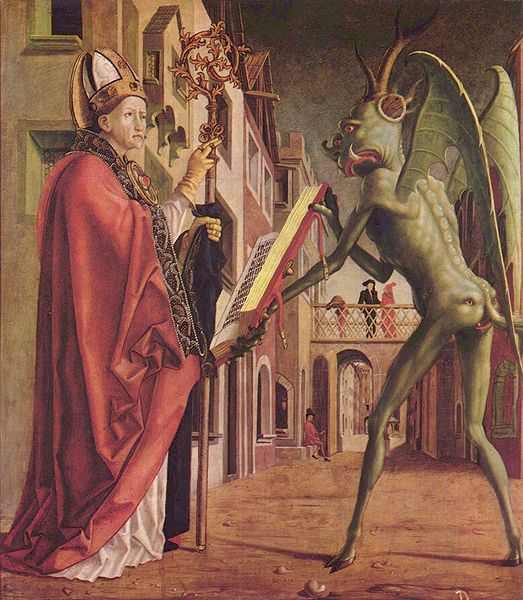 altarpiece by Michael Pacher depicting the Devil with Saint Wolfgang, Bishop of Regensburg

For instance, this answer suggests a connection between Dīs Pater and Cernunnos, a "horned god", and there is a horned form of Dionysus which could represent certain aspects of the dying/resurrected God not consistent with Christian thought. (Michelangelo's sculpture of Moses also famously has horns...)

I have a theory that could possibly explain this.

In Ezekiel 28:12-14, the king of Tyre (who is commonly believed to be Satan) is described as a cherub. In Ezekiel 1, the prophet Ezekiel saw 4 living creatures that had 4 faces, one of which is a bull. Later in chapter 10, he sees them again but says their are cherubim, and remembers that he had seen them earlier (in chapter 1). He describes their faces again, but there is one difference: instead of a face of a bull, they have a face of cherub. It looks like there are two types of cherubs: one that look bull-like and one that has 4 faces.

Being that the king of Tyre is said to have been a cherub, and that he is believed to be Satan, it may have been circulated that Satan had bull horns because he had a face similar to a bull. Of course, this was the result of people assuming that the King of Tyre was Satan, which the Bible does not explicitly say as far as I am aware of.

However, most Bible interpreters believe that the Ezekiel 28 prophecy against Tyre was a dual prophecy, both against the king of Tyre and against Satan. This is believed because some descriptions appear to be beyond human, such as being a guardian cherub or having been in Eden or on God's holy mountain. Some go as far as to believe that the king of Tyre was possibly possessed by Satan. (Source) Some more arguments supporting that the prophecy is partially about Satan can be found here.

Either way, this could possibly resulted in people thinking that Satan has horns and depicting him as such. The main issue here is that Satan is a spirit, and has no form. Thus does not have horns. Although, he could very well (and actually does) take on the form of a creature with horns or even a cherub. The Bible supports this in 2 Corinthians 11:14, where it says that Satan disguises himself as an angel of light. If he can make himself look like an angel of light, could he not also make himself look like other things?

Not the answer you're looking for? Browse other questions tagged greek christianity celtic the-devil or ask your own question.

4
Which Celtic god is the equivalent of the Roman Dis Pater?