Most gods in Egyptian pantheons are with animal faces? [duplicate]

Why there are gods with animal faces but human bodies in Egyptian pantheons? Are they out-numbered the human-faced ones? From biological perspective human is weak in physical (body) but strong in intellect (head), why would the Egyptians use such a counter-intuitive symbols to describe their gods that supposed to master certain potent powers beyond humans?

A) Almost all the gods in the Egyptian pantheon are with animal heads, does any god with human face? I recalled the Sphinx is but it a god? The face + body as human the non-hybrid is excluded, such as Isis, Osiris or Ra.

B) Contrarily the Greco-Roman gods (hybrids) are usually with human faces but animal bodies, such as centaurs, satyrs or gorgons (not full animal bodies but just animal parts such as wings or snake-hairs?). Are there any exceptions? And are there more examples of hybrids?

If the above intuitive knowledge correct, why there is such a contrast in these two cultures? Or are there any relationship between these? From historical accounts Egypt and Greece had contacts it's logical to assume there were inter-exchanging between them.

Here, there are confusions, things we can answer and things which we cannot.

Both Greeks and Egyptians are civilizations from the antique time. But:

You can see here something: Egypt and Greece while both of the antique time does not exactly coincide with two things:

Second point. At the moment Greece is starting to shine, the dominant civilization is Persia. And the relation between Greece and Persia is relatively more important that between Greece and Egypt. This is illustrated by the "Medic war" when King Xerxes tried to invade Greece and got his butt severely kicked (you have a fairly naive representation of that in the comic/movie 300)
It appears so that the Greeks we know (read Herodotus, Thucydides, Plato, Euripides [especially his Persia]) and you will see the Greeks dancing on their foot regarding Persians. Herodotus gives, for example, a fairly accurate description of Egypt (with his usual fantasy), but concerning his subject, Persian, try to count the number of time he is mentioning Persepolis (0 times in case you don't know). So Greeks tend naturally to project themselves with Egypt, but rightfully a lot of their culture was from East. Their writing system and lots of their legends are rooted in the Near East much more than Egypt.

this is the kind of question which is unanswerable. Not much more than explaining to you why Rembrandt while using so few light and Picasso was breaking his subject, either than: because they did... There is theory here and there about that: psychoanalysis, psychology, philosophy, extraterrestrials, if you are interested look for them.
Now generally Egyptian painting is a little bit hard to understand for the modern standard we are just living with it "culturally". Knowing why their gods have an animal head makes as sense as trying to understand why the Hell all their humans' head are looking on the side when their statues are so fairly accurate... Because they did...

Factually yes there is... Numerous gods were represented with a purely human form. And amusingly you can know them. This is, for example, Neith:

More amusingly without looking for Neith (I cited here because of Smite... modern video game with success), Isis, Osiris are human faced.
BUT it is slightly much more complex than that: 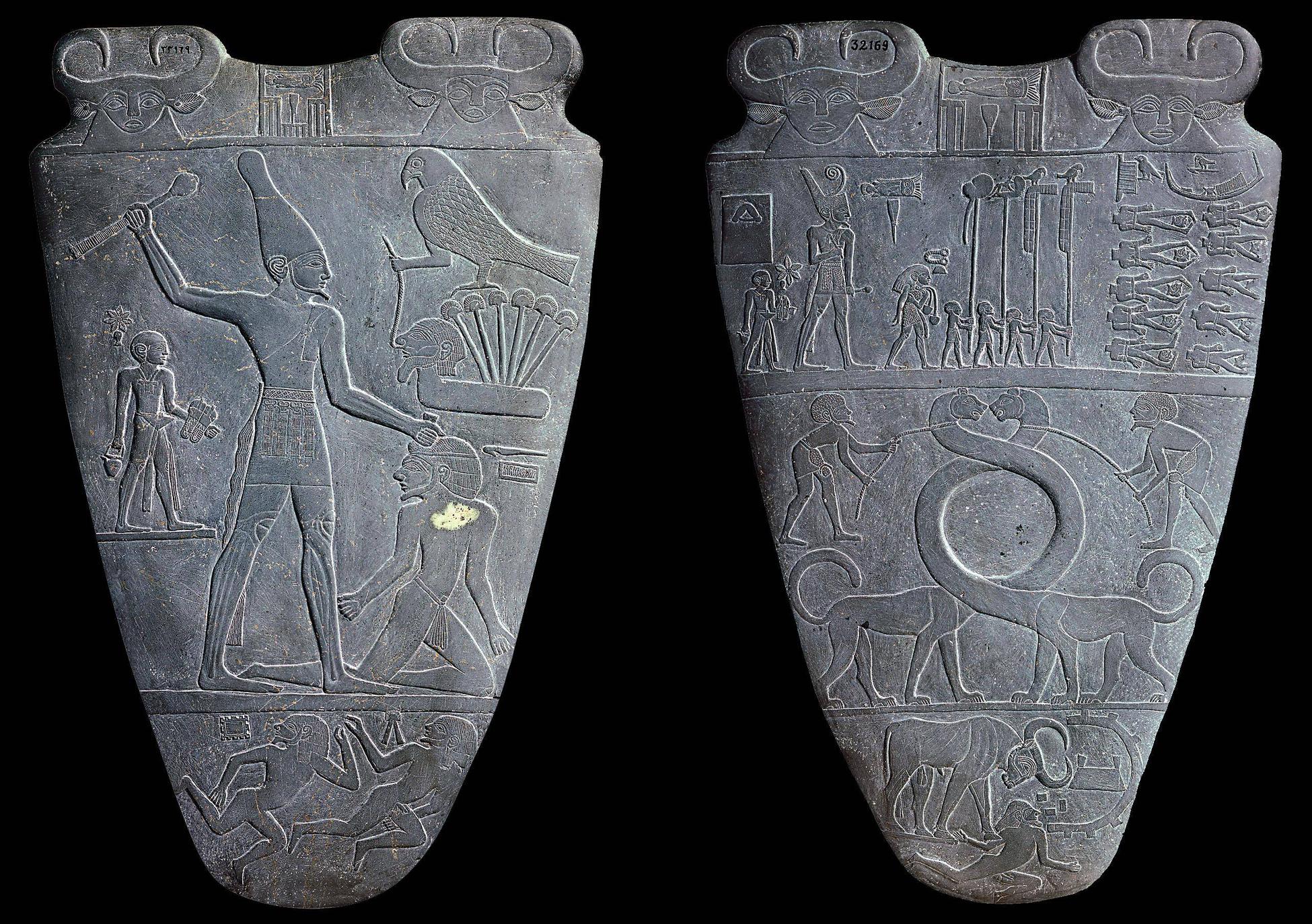 This is the tablet of Narmer, representing the Predynastic King Narmer unifying the Upper and Lower Egypt. Significantly for your question, you can see 2 things:

Those forms do not necessarily are present at the same moment in history but you have now a complete picture of Egyptian Gods.

The sphinx is one of the only representation of the other therianthropic form, human head, animal body. Note there is a lot of sphinx in Egypt they are highly praised during the New Kingdom and decorate mostly the tombs to guard them either as Lion body + human head, or falcon, panther, jackal (the one on Tuthankamon tomb was a jackal) etc.

Not the answer you're looking for? Browse other questions tagged greek egyptian pantheon demi-gods or ask your own question.

33
Why did Egyptian Gods have animal heads?
7
What is the connection of Egyptian mythology to Atlantis?

33
Why did Egyptian Gods have animal heads?
17
Do Egyptian myths provide explanations for the shape of the pyramid?
14
What was the explanation in Greek mythology for the absence of their deities?
23
Are there any depictions of Horus being crucified and resurrected
1
Why mythical god-like figures share common attributes like wings or lion body parts in different mythologies/cultures
7
Does Medusa's head turn one's clothing to stone together with its wearer?
4
Do the myths of Malayalam Onam, Egyptian Osiris Myth and Vietnamese Tet show cultural contacts?
4
Putting aside their ability to shapeshift, were the Greek gods especially large compared to humans?