How long was the voyage of the Argonauts?

Is there any indication in the Argonautica or any other ancient telling of the myth of roughly how long it took Jason and his Argonauts to travel from Iolcos to Colchis and back?

By my reading, the biggest stretch of time that Apollonius Rhodius mentions in his Argonautica as being spent in a single location by his heroes is in Line 1079 of Book 1, where they get stranded on Arktonnesos [Arctonnesus], “Bear Island,” for twelve days and twelve nights before they figure out how to persuade Kybele [Cybele] to let them successfully set sail again. Prior to this, the Argonauts have spent one additional day and night on Arktonnesos.

Beyond these numbers, the itinerary explicitly accounts for at least forty other days of travel in total (2 days at the tomb of Dolops in Magnesia; 2 days sailing from Magnesia to Lemnos Island; 1 day from Lemnos to Samothrace Island; 1 day from Arktonnesos to the River Kios [Cius] in Bithynia; at least 15 more days on the coast of Bithynia; 3 days from Colchis to the River Halys; 7 days on Drepane Island; and 9 days [+ nights] sailing between Drepane and Syrtis in Libya).

That accounts for 41 days of the voyage. After tinkering with GoogleMaps, I did some very rough calculations of how long it might take to sail from the one destination to the other of the numerous remaining ones (about 21 additional locations) with some added days for the activities described at the respective ports of call, and I got roughly 120 days for the entire expedition from Iolkos [Iolcus] to Colchis and back. Assuming that a month should have exactly 30 days in it (and of course they don’t necessarily behave this way), that’s exactly 4 months.

“Islands of Knowledge: Space and Names in Imperial Mythography” is the 14th chapter of Myths on the Map: The Storied Landscapes of Ancient Greece.1 The chapter’s author Charles Delattre notes that Apollodorus follows Apollonius Rhodius’ itinerary for the voyage of the Argo.

I genuinely was not expecting my guesswork to turn out the same result as an ancient source, but it makes sense, then, that Apollodorus was using Apollonius’ route. The end of Bibliotheka 1.9.26 says that the Argo, to conclude its sojourn, sailed from Aigina [Aegina] Island, passing between Euboia [Euboea] Island and Lokris [Locris] on its way back to Iolkos,

having completed the whole voyage in four months.
[Emphasis mine]

The Question becomes intricately more complex if it takes into account the different itineraries that other ancient mythographers wrote about, which contradict Apollonius and Apollodorus quite sharply in some respects. For this, see the maps2 of the routes described by Pindar; Hecataeus; Herodorus of Heraclea Pontica (who has the Argo pass through his hometown both on its way to and from Colchis, going back exactly[?] the same way it went); Timaeus of Tauromenium; the Argonautica Orphica; and even the theory of Henriette Mertz3, who 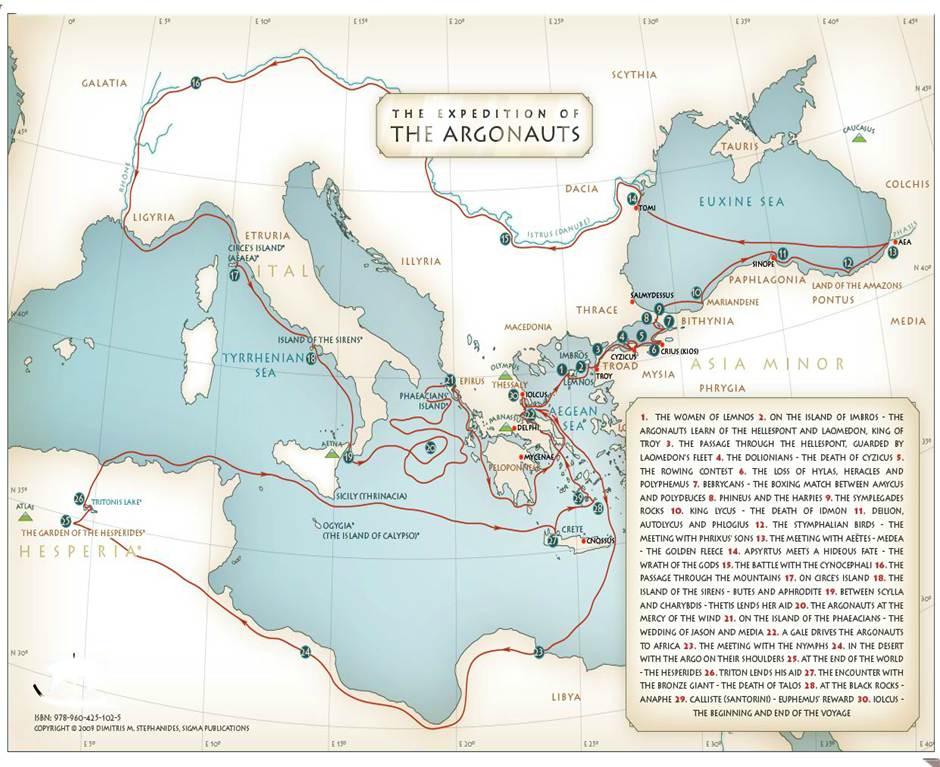 (Pseudo-)Apollodorus, as far as I know, is the only ancient source to explicitly state the entire collective duration of the Argonautic enterprise.

2. Courtesy of the website Jason and the Argonauts Through the Ages. (Jason Colavito, the author of this site, is incidentally the namesake of the Argonaut leader.)

3. Mertz’s theory takes the Argo all the way around the coast of Brazil as well as touching every single one of Brazil's neighbouring [modern] countries! (See Colavito's cartographical rendition of this.)

Not the answer you're looking for? Browse other questions tagged greek argonauts or ask your own question.

16
Was Talos an intelligent machine?
14
What happened with the Golden Fleece?
9
Hittite story similar to the story of Jason and Medea?
6
What are some examples of ten-year-long cycles?
12
Why does Medea escape punishment?
9
How does one get purified of murder in Greek mythology?
4
What do we know of Perses, son of Helios and brother to Circe?
10
Is there any link between Achilles and Sigurd/Siegfried?
6
Is it possible to build a timeline for Greek mythology?