What were the origins of the Santa Lucia processions in Sweden featuring candle-wearing Lucia and the cone-capped star boys?

Were there street processions before local newspapers started encouraging them in the 1920s? And how did the "star boy" element - perhaps related to the practice of Epiphany singers, although Epiphany and Santa Lucia's day are quite a way apart - accrete to the Lucia tradition?

The tradition of Lucia processions as known today was started in 1928. There were some precedents, but nothing matching exactly.

Some background: the oldest part of folklore that is relevant to the Lucia tradition is the link to the winter solstice (using the Julian calendar). in the fourteenth century, they coincided, and it appears this connection lived on even when the Julian calender got less accurate, and when the Gregorian calender was introduced in Sweden in 1753 (possibly this had something to do with "Lucia" being linked to "lux", but otherwise there is no obvious connection between the early traditions and the saint). The date was also close enough to Christmas to acquire some weight from it. This was seen as a very dangerous night, with evil powers at their strongest. There were several different ways to deal with this night, but some sort of wake seems to have been common, especially in western Sweden.

The first record of the tradition of a young girl clad in white and with a crown of candles, serving breakfast, is from 1764 (this might have been an adaptation of a German tradition of dressing up as Jesus with candles in the hair).

Another tradition from the same area was where young men went around between farms and sang and in return got some spirits or food (similar traditions has existed in other parts of Sweden, during other times of the year). This was originally linked with Saint Stephen, and done on December 26. One important part of this tradition was a story of how Stephen was supposed to water the horses of Herodes, but one refused to drink from the water because it saw the reflection of the Star of Bethlehem. A similar tradition was for young men to dress up as women and go around the neighbourhood and act as fools, on the night before Lucia. The linking with Lucia seems to have been done in modern times, but I have not found many details on how this happened.

These Stephen singers might be one origin of the boys in white with stars in their hand. Another source instead links them with the Wise men in Christmas plays.

The sources are, for obvious reasons, in Swedish:

There seems to be no clear link as to how the "cone-shaped star boys" became associated with candle-wearing Saint Lucy during the Swedish processions in her honor, but there are several possible links I would like to point out.

I am going to try and bring to the forefront additional information to Andejons' Answer.

The compiler of the now famous work known as the Golden Legend (Legenda Aurea) in 1260 by Jacobus da Varagine (1230-1298) does not mention anything that could be seemingly used to be the source of this tradition, but admits the current traditions that were known in his time. One can read the Golden Legend's entry on St. Lucy here (59).

Now I will try to show how the "con-bearing star boys" were added to the mix.

In 1649 the port city of Palermo was in the midst of a famine. Then on her Feast Day (December 13) a ship sailed into port bearing a shipment of wheat. The city was saved by the Saint. According to custom, bread should not be eaten on December 13; cuccìa should be the only source of wheat, and the primary source of nourishment for the day.

She was also known to feed her people in times of famine. A story is told that St. Lucia arrived in the Syracuse harbor in 1582, bearing wheat on a ship for the townsfolk who had prayed to her for help while they were starving. A similar story takes place in medieval Sweden. St. Lucia, “with a face so radiant that there was a glow of light all about her head,” arrived in a ship on Lake Vannern bearing provisions during a winter famine. From both of these stories comes the custom of eating wheat porridge in honor of Lucia.

Various explanations are given of how the Italian Catholic saint traveled to Lutheran Scandinavia and became firmly entrenched in Nordic culture. Did the Vikings bring the story of St. Lucia back with them on their travels? Perhaps the story was carried by German traders, or priests and monks from the British Isles may have introduced the story.

However the story arrived in the northlands, it seems clear that the name “Lucia,” from lux (light), captured Nordic hearts as she merged with their ancestral traditions of Freya and Frigga. It was not unusual for the titles of ancient goddesses to be adopted as titles for both the Virgin Mary and for female saints. “Freya Vanadis,” meaning “shining bride of the gods,” reminds us of Lucy’s title “Lucia Bride.” Frigga was known as “Queen of the Aesir,” and St. Lucy was also called the “Lucia Queen.” Both were solar goddesses, associated with sun symbols such as sunwheels, cats, spinning, amber, and gold. Freya was called der vana solen, “the beautiful sun,” in a Swedish folksong.

One last point I would like to bring up is the fact the Three Wise Men who came from the East followed the Star of Bethlehem (Judea) all the way to the manger were they were received by Jesus, Mary and Joseph. As we already know St. Lucy's Day was once the longest night of the year and is still the beginning of the Christmas season to many!

The introduction of the "cone-shaped star boys" in the St. Lucy procession may be a mixture of the above historical information, be what it may. 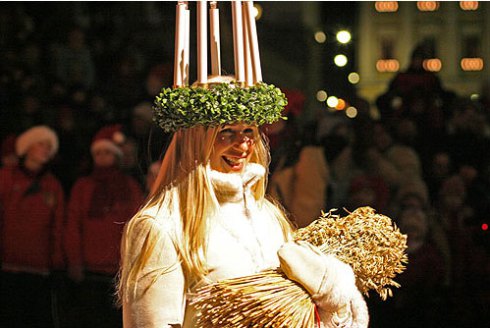 The traditional celebration typically taking place at churches, involves a procession of girls and young women. They are dressed in white robes as a symbol of purity and carry candles to symbolize the fire that was not able to take Santa Lucia’s life. One girl is elected to be St. Lucia and she leads the procession wearing a crown of candles (usually electric candles in modern day). 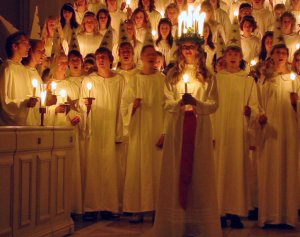 Because her feast day falls so near to Christmas, some Lucia Day traditions, which developed in the 1700s and beyond, are somewhat blended with Christmas traditions. For example, the girl who is elected to be St. Lucy will hand out candy canes or sweets and pastries. Additionally, boys are often included in processions, dressed in robes and called “star boys,” or dressed as elf-like creatures called “tomtenissar” (Santa’s little helpers) or gingerbread men. - The Feast of Saint Lucy