Are Krishna and Hermes related?

Both gods have legends involving extraordinary powers as children.

This link discusses the infant Krishna, as an incarnation of Vishnu, instructing his father Vasudeva on how to escape the wrath of the tyrant Kamsa, and goes on to discuss the many wondrous deeds of the child god.

As the wiki notes, Krishna was also mischievous and a cow herder.

Hermes is likewise mischievous and perhaps the most famous cow herder in Greek mythology:

"He was laid in swaddling-bands on the winnowing fan,2 but he slipped out and made his way to Pieria and stole the kine which Apollo was herding.3 And lest he should be detected by the tracks, he put shoes on their feet and brought them to Pylus, and hid the rest in a cave..."
SOURCE: Apollodorus 3.10.2

Krishna is associated with music, famous for his flute playing, and Hermes is credited with the invention of the lyre, and plays a flute:

"...before the cave he found a tortoise browsing. He cleaned it out, strung the shell with chords made from the kine he had sacrificed, and having thus produced a lyre he invented also a plectrum ... when Apollo heard the lyre, he gave the kine in exchange for it. And while Hermes pastured them, he again made himself a shepherd's pipe and piped on it.
SOURCE: ibid.

These are the obvious parallels—are there more? What have scholars written about this subject?

That depends on your inference, in my opinion.

Both Krishna and Hermes were tricksters and thieves while in their childhood. Krishna stole and ate butter ( Which led to him being shackled to two pots by his adopted mother, but that is a different story ), while Hermes did what he did with Apollo's cows. Both were musicians. Both were related to Bovines (Hermes ate them. Krishna was a cowherd) . Both have overcome people said to be undefeatable ( Hermes had Argus close his eyes. Krishna defeated Kansa and his wrestler ).

However, that is where the similarity ends. Hermes, while being an Olympian, is not seen as so important as the Big Three. However, Krishna is called the Poornavatar, the one who is most similar to Vishnu, the preserver. Hermes' actions had consequences. What Krishna does is Leela, neither vice nor virtue. Hermes is a god, and immortal. Krishna, while worshiped as a god, was born and lived as a mortal, and died due to a random poisoned arrow.

So, while there are similarities, there are differences too. Which one outweighs the other, that is your choice.

There are, as far as I know, no such scholarly articles, unless you count Wattpad stories as such.

This would be more of a comment than an answer, but since I don't have the reputation yet...

I often thought along the same lines, and I ended up here because of this item, which is claimed to be a representation of Mercury: 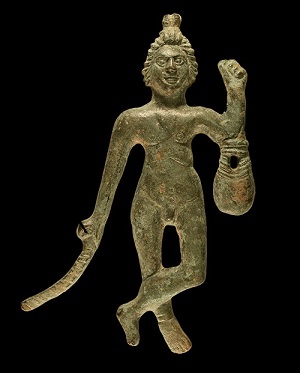 I'm no expert, but I don't remember seeing Hermes standing with the legs in that position - which is, instead, strikingly Krishna-esque.

It's probably nothing, but I found it curious.

Not the answer you're looking for? Browse other questions tagged greek comparative hindu hermes or ask your own question.

21
Who gave Hermes his winged shoes?
12
Are there Kali-types deities in other pantheons?
14
Was Hermes originally mortal?
3
How is Hermes linked to Odin?
3
Who said Hermes helped Hades?
7
How are Norse and Celtic mythology related?
7
What is the relationship between the term 'hermit' and the traditions around Hermes and Hermeticism?
1
Did Hermes ever somehow helped Prometheus, or not? Is he God of thieves, or what?
4
Non-Greek myths related to weddings
3
In what ancient source, if any, does the infant Hermes disguise himself as Ares?