What are the special powers of a unicorn's horn?

The unicorn is a mythological creature similar in appearance to a horse but has a magical horn which is said to have very special powers. Can anyone mention a full list of powers of unicorn horn? I'm curious..

mythical-creatures magic
Share
Improve this question
edited May 8, 2018 at 16:44

What are the special powers of a unicorn's horn?

Many stories of unicorns refer to the magical properties of their horns, a claim first made by a Greek physician named Ctesias nearly 2,000 years ago.

The first mention of the therapeutic properties of unicorn’s horn is thought to have been by Ctesias, a Greek physician from Cnidus, who flourished in the fifth century BC. He believed the unicorn was an Indian wild ass that had a horn growing from its forehead. Drinking cups made from this horn could neutralise poison and afford protection against convulsions and epilepsy. In the middle ages it was used to cure plague, fevers and bites from serpents and mad dogs. It was even said that poisoned wounds could be cured merely by holding a piece of the horn close to them. Surely we cannot fail to be impressed when we read in ‘Doctors and Doctors’ by Graham Everitt that the unicorn was: “ … perfectly conscious of the sanitary virtues which resided in its nasal protruberance, and would dip its horn in the water to purify and sweeten it ere it would drink.” - The Use of Unicorn Horn in Medicine

Unicorn are mentioned in the Prophecies of Catherine Emmerich.

"Unicorns still exist and herd together. I know of a piece of the horn of one of these animals which is for sick beasts what blessed objects are for men." - Prophecies of Anne Catherine Emmerich 5

And what about Harry Potter's unicorn?

In Harry Potter's world, the unicorn is a magical horse whose single horn is used in potions and whose blood can revive someone who is "an inch from death." Ancient Greek and Roman scholars also believed that crushed unicorn horn could cure many illnesses – although the unicorns they imagined were not just stark white, but also red and black. The myth of the unicorn resurfaced in European medieval tales, which stated that drinking from the horn would protect from poison. - The Real Roots of 7 Magical Beasts From Harry Potter

The power of the unicorn resides in its' horn!

In the book Mythical Monsters by Charles Gould, a 6th century merchant/historian is quoted about the power of the unicorn which he had learned about on a trip to Ethiopia. He wrote, “It is impossible for this ferocious beast to be taken alive; and that all its strength lies in its horn. When it finds itself pursued and in danger of capture, it throws itself from a precipice, and turns so aptly in falling, that it receives all the shock upon the horn, and so escapes safe and sound.” - What is the Power of a Unicorn’s Horn?

Healing. Curing diseases and sealing deadly wounds. Not sure if Excaliburs' sheath was made from it?...

Apothecaries often used things they called unicorn horns. If they truly were using narwal teeth (no medicinal effect) or just some other considerably cheaper placebo is beyond this topic.

Unicorn is often a symbol of natures' purity. Grazes only in moonlight and stuff. So a simple touch can neutralize poisons and removes evil influence.

Purge. As it clears corruption and evil it can also work as a weapon against the corrupted.

May also be used for making magical tools and instruments, chatting up fairies, impaling wyverns and Fomorians, upsetting a druid or a forest guardian, as a really expensive vaulting pole.

My overall sense is a general association with life, generation, and regeneration as a phallic symbol—it's not by chance that unicorns are associated with virgins!

When you look at the at the Domenichino "maiden & unicorn", you may note that it is not entirely un-erotic: 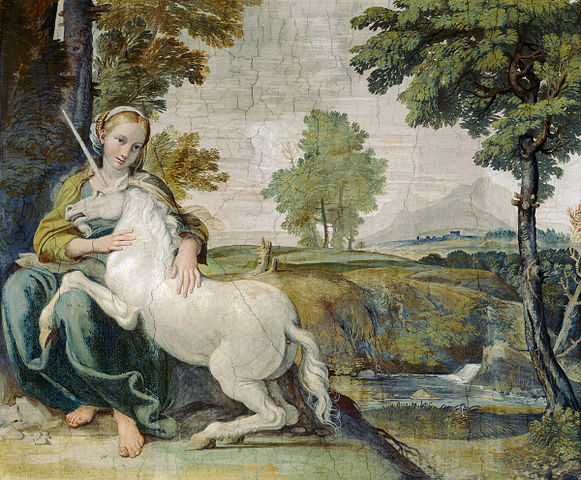 There are many unreliable sources to be found online, but, as I recall, Umberto Eco explicated this idea in his medieval period novel, Baudolino.

Not the answer you're looking for? Browse other questions tagged mythical-creatures magic or ask your own question.

22
Prevalence of Underwater Panther
13
What demons/fabulous creatures did the Sumerians mention?
9
Why is the crow of a rooster fatal to a basilisk?
3
What are the origins of thestrals?
9
What is the origin of the myth that witches burn in water?
9
The repertoire of the Sphinx
2
A unified understanding and description of a "spirit"?
11
Did Bedwyr (Bedivere) ever have dark magic?
3
Important 'watchers', 'watchdogs' or 'guardians of a process'