Who did Zeus punish by having poison/acid dripped on them?

I am not sure if this is a real myth, as I learned about it from a Tumblr post: 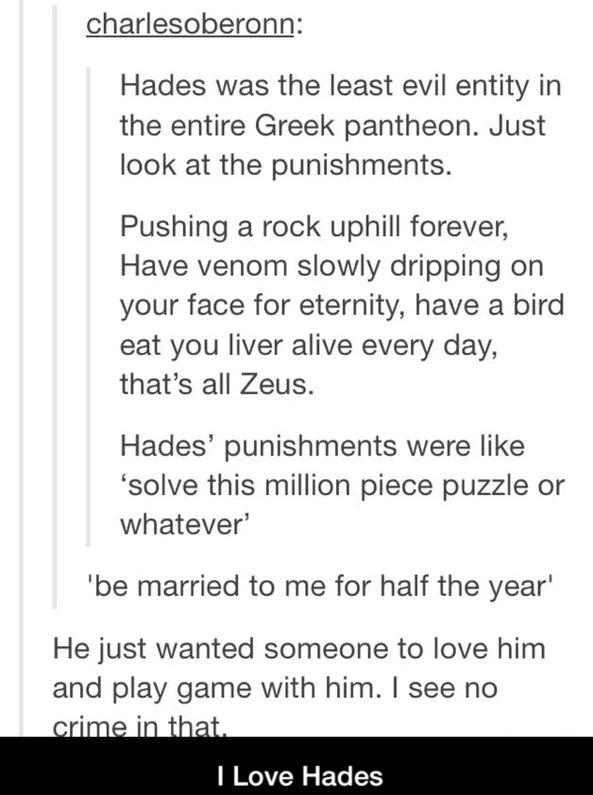 Hades was the least evil entity in the entire Greek pantheon. Just look at the punishments.

Pushing a rock uphill forever,
Have venom slowly dripping on your face for eternity, have a bird eat you [sic] liver alive every day, that's all Zeus.

Hades' punishments were like 'solve this million piece puzzle or whatever'

'be married to me for half the year'

He just wanted someone to love him and play game [sic] with him. I see no crime in that.

One of the punishments mentioned is poison acid dripping on someone. Is this true? Who did Zeus punish in this fashion?

I do not think there's a tale were Zeus punishes someone with poison, as in Greek mythology punishment by poison is more often associated with women. See, for example, the story of Medea, or how Hera attempted to poison baby Hercules with snakes.

I think it's likely whoever wrote the comment in your screenshot was mistaken, and were actually thinking of Loki's punishment (as already mentioned by Lauren Ipsum).

The only reference concerning Zeus being associated with poison is this:

But when Zeus was full-grown, he took Metis, daughter of Ocean, to help him, and she gave Cronus a drug to swallow, which forced him to disgorge first the stone and then the children whom he had swallowed.
SOURCE: Apollodorus, Library, 1.2.1

That is more about a poison being used to induce vomiting than using poison to kill, although Apollodorus continues:

and with [his disgorged brothers' and sisters'] aid Zeus waged the war against Cronus and the Titans.

Which eventually led to the overthrowing of Cronus.

Note: the word used by Apollodorus is φάρμακον (pharmakon) from which we derive modern terms such as "pharmaceutical". Meanings range from medicine to drug to poison, and the word can also be used to connote a sacrificial victim.

As several have pointed out, this punishment listed is Loki's, and does not appear in Greek or Roman myth. The confusion likely arises from similarities of Prometheus/Loki, as trickster/benefactors who were bound and tortured. Likewise, Zeus/Odin are similar as scheming "sky father" rulers of the gods.

The most famous poison story from Greek mythology may be the one involving Heracles, Deianira, and the wicked centaur Nessus. [Note: this torment is due to the wrath of Hera, not Zeus. Even though Hercules has finished his labors, and is said to have "finally appeased the hatred of his fierce stepmother", his absence from his wife may be understood as a slight against the wife of Zeus, Goddess of Marriage. Indeed, it is this absence and Deianira's anxiety over her husband's love that leads her to unwittingly destroy him.] Here are some excerpts:

[Hercules] shot an arrow through the centaur's back, so that the keen barb was exposed beyond his bleeding breast. He tore it from both wounds, and life-blood spurted instantly, mixed with the deadly poison of Lernaean hydra. This Nessus caught, and muttering, “I shall not die unavenged”, he gave his tunic, soaked with blood to Deianira as a gift; and said, “Keep this to strengthen waning love.”
Metamorphosis, Ovid, Book IX

Time passes and the plot thickens:

...tattling Rumor, swollen out of truth from small beginning to a wicked lie, declared brave Hercules, Amphitryon's son, was burning for the love of Iole. And Deianira—his fond wife—convinced herself, the wicked rumor must be true.
ibid.

The rumors prove too much for Deianira:

So, torn by many moods, at last [Deianira's] mind fixed on one thought:—she might still keep his love, could certainly restore it, if she sent to him the tunic soaked in Nessus' blood.
ibid.

The hero then was casting frankincense into the sacred flames, and pouring wine on marble altars, as his holy prayers were floating to the Gods. The hallowed heat striking upon his poisoned vesture, caused Echidna-bane to melt into his flesh.

As long as he was able he withstood the torture. His great fortitude was strong. But when at last his anguish overcame even his endurance, he filled all the wild of Oeta with his cries: he overturned those hallowed altars, then in frenzied haste he strove to pull the tunic from his back. The poisoned garment, cleaving to him, ripped his skin, heat-shriveled, from his burning flesh. Or, tightening on him, as his great strength pulled, stripped with it the great muscles from his limbs, leaving his huge bones bare.

Even his blood audibly hissed, as red-hot blades when they are plunged in water, so the burning bane boiled in his veins. Great perspiration streamed from his dissolving body, as the heat consumed his entrails; and his sinews cracked, brittle when burnt. The marrow in his bones dissolved, as it absorbed the venom-heat.
ibid.

You can read more about it here.

Not the answer you're looking for? Browse other questions tagged greek myth-identification zeus or ask your own question.

6
What is the meaning of Hercules' self-immolation?

13
Did Zeus have any male lovers?
17
How did Zeus, Poseidon, and Hades decide who would rule what?
32
Why did Zeus assume so many different forms for seduction?
11
What humanoid gods have had skin colors other than that of the people who worship them?
7
Who was the goddess, pregnant with Zeus' child or children, who was denied sanctuary?
8
Did the power of Zeus grow considerably after the Titanomachy?
7
Is there a tale of Zeus having sex with a deer?
4
Did Zeus give Pandora the box?
10
Who was Zeus' first child conceived with a mortal?
2
How did Prometheus deceive Zeus?