How were eclipses explained in Egyptian mythology?

Eclipses were probably one of the phenomena that puzzled the ancient people. How was it explained in Egyptian mythology, and were there any gods connected with it (like thunder is connected to Zeus)?

There is actually an Egyptian goddess named Hathor and he is the god of Solar Eclipses. From this website there are actually many gods associated with the sun:

Horus the Hawk is the Sun in totality.

The Sun god Atum is the eclipsed Sun passing the second contact of a total eclipse.

The Scarab Khepri was a representation of the dark New Moon.

The Great Sphinx was the Egyptian Lord of Solar Eclipses.

Hathor was the Egyptian Goddess of Solar Eclipses.

The problem is the Egyptians couldn't explain why the gods had this phenomenon and never actually put into words their beleif on the matter.

Until recently, it was thought that the phenomena of solar eclipses was virtually unmentioned in the Ancient Egyptian canon. Except for a single story of Hathor luring Ra, the sun-god, back on his celestial track, very little concrete textual references were found.

This paper examines relevant texts which may throw some light on the mystery of the apparent absence of mentions of solar eclipses.

Some of these texts are penitential, expressing remorse for wrongdoing and seeking forgiveness or the lifting of a punishment imposed by a god, while others are hymns and prayers. Although the form of the expressions used in the actual texts varies slightly from case to case and their translation varies from one researcher to another, all of these texts contain a form of words which seem to be trying to express the concept of darkness at a time which was unusual:

‘to see / behold darkness by day’ (of your making);

‘in her hand by night as by day’

‘to see the darkness you create’;

‘the day-time darkness thou has made’;

Apep's goal is to devour the sun god ra and his son khonsu god of the moon. Seph, osiris and other gods help ra scare off Apep. Apep is god of all darkness, so since the universe is nothing but dark matter. He is immortal he is reborn and comes back. When the solar eclipse happens it means that Apep, is fighting with both Khonsu & Ra. Not just one, so it potentially can mean the end of the world if they both lose.

Technically, there isn't one (that we know of).

Other comments here have mentioned Hathor and Apep/Apophis. But this is misleading and misrepresents those figures.

Apep is the embodiment of pure Chaos. He resides in the underworld, and does battle with Re and his entourage. If Apep were ever to succeed, that wouldn't spell an eclipse, but rather it would mean the destruction of all Order and goodness in the world. At present, there are no explicit associations known of Apep with eclipses.

Hathor is more complicated. She is a sky deity (N.B., not the sky deity -- which is Nut -- but a sky deity), associated with the night sky as well as being one possible personification of the sun eye (or Eye of Re). She's also associated with music, dancing, cows, and cats, among other things.

The body of mythology involving Hathor, including her role in the daily rebirth of the sun, is vast. But there may be one story about an eclipse.

There are different variations of this myth, but in short, either a) Re sends the sun eye (which can act independently from him) off to slaughter a bunch of misbehaving humans; b) the sun eye gets mad at Re and leaves for a bit; or c) both of these events occur. In this particular episode, Hathor is the figure fulfilling the role of Re's eye.

Ultimately, things get resolved (by the diplomatic Thoth) and things return to normal.

Should we associate this story with eclipses? Maybe, but it's never indicated in the story that the sun is "hidden" in some way: In the version where the sun eye gets angry and leaves temporarily, it's because there is another sun eye there taking her place!

In the end, at best we can say is that there quite possibly may be a myth associated with eclipses. But Hathor (or any other Egyptian deity) is never depicted as an "eclipse god" in any surviving writings to date.

If you'd like to investigate this further, I recommend this book. It specifically discusses Hathor and this myth, and the author raises the possibility of the eclipse association. 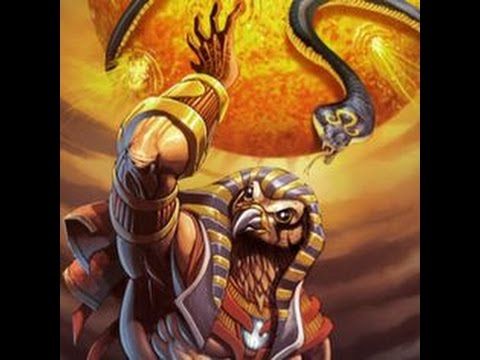 Apep was the snake god who tried to eat or smother the sun. Ra rode a boat across the sky river. Apep would fight Ra while trying to swallow the sun which was on Ra's crown. Ra would scare Apep away with his staff, and Apep lived to fight another day.

Apep the snake almost ate the sun but Ra fought us off.

17
Do Egyptian myths provide explanations for the shape of the pyramid?
14
Star islands in Egyptian cosmology
7
Are there any instances where the Egyptian gods are promiscuous?
10
Are there any stories that present solar eclipses as a good sign?
4
What's the connection between the Greek and Egyptian gods?
4
Do the myths of Malayalam Onam, Egyptian Osiris Myth and Vietnamese Tet show cultural contacts?
4
What is the ancient Egyptian name for "The Book of Gates"?
2
Is there any evidence of Christianization of Egyptian myths?