What are the origins of the snowman?

In many countries where snow falls there is a folk tradition of building snowmen. Almost always male, these temporary statues are usually human in scale, standing 0.5 to 2 metres tall, and made from a base of two or three large rolled-up snowballs. During construction additional snow is often put on and smoothed, so that the resultant shape is roughly conical with a rounded top, with a more gently rounded midriff which may remain concave or be bulked out to be convex. Objects are commonly added, such as pieces of coal to represent eyes, a carrot for a nose, another item for a mouth, and sometimes a hat and scarf and items to represent coat buttons. The statues are left to melt, which might take only a day or two or several months depending on whether the climate is mild or severe.

What are the origins of this tradition?

Snowmen were a phenomenon in the Middle Ages, built with great skill and thought. At a time of limited means of expression, snow was like free art supplies dropped from the sky. It was a popular activity for couples to stroll through town to view the temporary works of chilly art. Some were created by famous artists, including a 19-year-old Michelangelo, who in 1494 was commissioned by the ruler of Florence, Italy, to sculpt a snowman in his mansion’s courtyard.

So the snowman was essentially a form of sculpting that people could do for free. The article, however, does not seem to have made clear what the first snowman was because nobody knows. It seems that they are simply a form of expression that everyone could take part in easily. They saw their chance to express themselves for free in an era where it was hard to do so, and took it, making snowmen. The traditions continued on years later, all the way to the present day.

Bob Eckstein is the author of a the book The History of the Snowman. In the book, he says that the first documentation of a snowman that he found was in 1380 in an illuminated manuscript, where he also notes building a snowman was a popular form of entertainment in the Middle Ages. The building of snowmen certainly began long before the 14th century. Both children and adults used the free gift of snow to express their ideas each according to their abilities in snow. 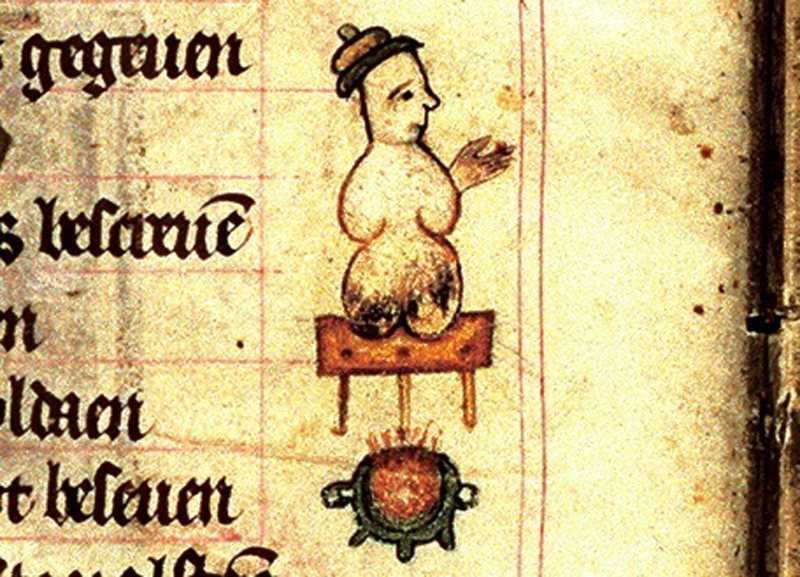 Early snowman documentation has been discovered as far back as the Middle Ages, but we must assume that humans, creative beings that they are, have taken advantage of the icy materials that fall from the sky ever since winter and mankind have mutually existed. Bob Eckstein, author of The History of the Snowman, found the snowman’s earliest known depiction in an illuminated manuscript of the Book of Hours from 1380 in the Koninkijke Bibliotheek in The Hague, Netherlands (shown above).

In the Middle Ages, building snowmen was a way for a community to find the silver lining in a horribly oppressive winter rife with starvation, poverty, and other life-threatening conditions. In 1511, the townspeople of Brussels banded together to construct over 100 snowmen in a public art installation known as the Miracle of 1511. This event was uncovered by Eckstein in his The History of the Snowman book. - Winter’s Effigies: The Deviant History of the Snowman 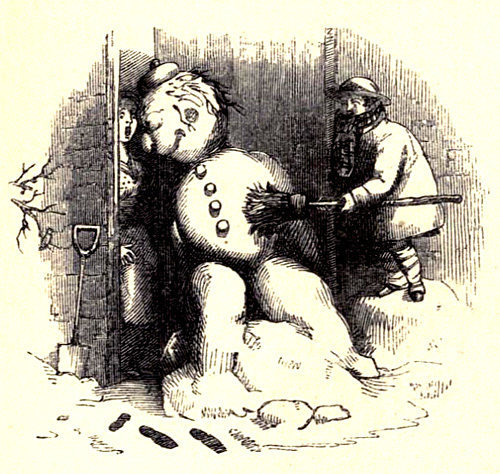 The Snowman Trick (1950), illustration by Luke Limner, Esq. (via Abaculi)

The snowman’s place in the traditional Christmas canon of jolly holiday diversions — along with ice-skating and horse-drawn sleighs — gained a higher status in the early Victorian era, when Prince Albert thrust his penchant for German holiday fun onto England. Santa Claus and the snowman became ubiquitous icons who soared hand-in-hand o’er the land of commodified Christmas kitsch. - Winter’s Effigies: The Deviant History of the Snowman

Pre-19th century According to H. Siiger, the Yeti was a part of the pre-Buddhist beliefs of several Himalayan people. He was told that the Lepcha people worshipped a "Glacier Being" as a God of the Hunt.

We mustn't forget Yeti, the Abominable Snowman. There seems to be some connection, suggesting the legends may be even older and more global.

It also reminds me of the legends of the Green Man of the wood, as both are "wild men".