What is the significance of this part in the myth of the resurrection of Osiris?

After Osiris is tricked and killed by Seth he is dismembered, and it is up to his wife Isis to recover all the pieces and bring him back to life. There is something that always caught my attention about the way she does this, since there is a piece she can't recover (Osiris' penis).

One piece only she did not recover, for it had been eaten by certain impious fishes; and their kind were accursed ever afterwards, and no Egyptian would touch or eat them. [...] She gathered the pieces together, rejoined them by magic, and by magic made a likeness of the missing member so that Osiris was complete.

I have always wondered at the significance of having a missing piece, and that this piece is the one used to conceive. I have read several slightly different versions of this myth in which she is able to reconstruct it with magic or able to have a posthumous union with her husband and conceive in spite of the missing piece.

Could somebody clarify what is the importance of not being able to recover all the pieces of Osiris and the significance of the missing piece being Osiris' manhood?

egyptian osiris resurrection
Share
Improve this question
edited May 2, 2018 at 10:42

Maybe you should give a link to the version of the myth you are stating , as it is not in the wikipedia article linked below. The only mention about penises is in

Plutarch also states that Set steals and dismembers the corpse only after Isis has retrieved it. Isis then finds and buries each piece of her husband's body, with the exception of the penis, which she has to reconstruct with magic, because the original was eaten by fish in the river. According to Plutarch, this is the reason the Egyptians had a taboo against eating fish. In Egyptian accounts, however, the penis of Osiris is found intact, and the only close parallel with this part of Plutarch's story is in "The Tale of Two Brothers", a folk tale from the New Kingdom with similarities to the Osiris myth. 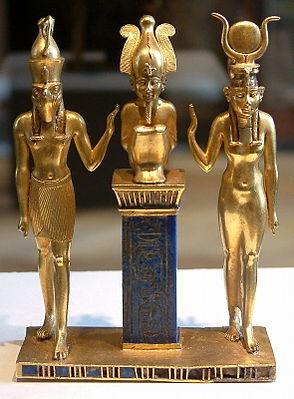 From right to left: Isis, her husband Osiris, and their son Horus, the protagonists of the Osiris myth, in a Twenty-second Dynasty statuette

Thinking on your version:

Were he not emasculated in his final form it would be expected that he would deal with Seth. He needed a son to vindicate his line and Isis managed it.

It is interesting that in this image Osiris is shown only from the waist up, indicative of the emasculation.

The penis that Isis magically regenerated recalls the parthenogenesis myths in the region.

I am reminded of the NTR, the Neteru, or Netyeru, the great beings, however they were called, that the most ancient of Egyptians are believed to have worshipped most fervently, who reputedly could resurrect themselves time and again and never die, once with the appearance of a man or woman, then a falcon, an ibis, or a jackal, and so forth, and who were also able to arise in the world by force majeure without the requirement of sexual activity to cause conception. In other words a baby could conceivably be born to a woman who may not have had sex at all...

However, Osiris' goal is to have a spiritual successor to oppose evil, and even many successors, though he doesn't necessarily need a penis to achieve that goal, especially as he has his faithful wife, Isis, who is faithful in more ways than one, because not only is her husband an immortal in the faith through wisdom, but so is Isis herself, through her close association with Djehouti, or Thoth, who has instructed her in the art of uttering words of efficacy. The words of a hymn declare that she was

...strong of tongue, and uttered the words of power which she knew how to pronounce, and she halted not in her speech, and was perfect in giving the command and uttering the word

and she took the form of a bird and hovered above the dead body of her husband Osiris, fanning him with air by beating her wings, and emanating light from the sheen of her feathers, and uttering words of power unceasingly, and at length she roused the dead to life. The embrace that followed resulted in Horus being born, so perhaps in the process of being resurrected Osiris was made whole again. Personally, I'd like to think so!

I used as a source E. A. Wallis Budge's Egyptian Magic

The phallos is made from beeswax in some versions, pretty sure. Neith is Tanith, a rough equivalent of Asherah and Anat/Athena. Asherah was called Anat Yahu in ancient inscriptions. Her Temple was called the "house of the bee".

Here is how I would Interpret the absence of his penis. I really see this as a depiction of successful grief. Now it's important to note that Isis revives Osiris, but after conceiving Horus, Osiris goes and becomes the God of the underworld, ruling over the dead. Does this count as a resurrection? It's common among other resurrection myths from the region, as well.

But Isis runs around Egypt, gathering all of the pieces she can find. This is what we do when we lose someone this close to us! Of course, no matter how we surround ourselves with their belongings, no matter how we strive to engage in activities that reminds us of our lost loves, we can never actually be with them again, hold them, kiss them, make love to them.

I think you're onto something, with the fact that the penis represents the ability to reproduce. It's a symbol of the future, as well. Remove it before reproduction and the bloodline dies. In some versions of the myth, the phallus she makes is vegetable, a reed or a cucumber. In most versions, it isn't described, it's more magical. She somehow managed to conceive his son through a magical phallus, maybe one that wasn't even there corporeally.

So what does conception represent, here? If we continue interpreting the story through a lens of grief, I'd say it represents the final stage of grief, acceptance. That is, Isis finds a way to lay hold of the future, even without the physical presence of her dear husband. She finds a way to move forward, and as she does, she finds herself accompanied by a new form of him, a falcon God. This new form, of course, isn't Osiris himself, she'll never have him back. But he is always watching, from above. Watching over her.

I find it beautiful. Full disclosure: I recently lost somebody very close to me, and I've honestly just discovered that there are very many good stories which can be quite helpfully interpreted through the lens of grief. I'm sure there are many other, perfectly valid, ways to interpret this story.

Part of the Grand Plan?

An "impious fish" ate the phallus of Osiris.

What if that fish was female and transformed into Aphrodite, including Osiris' seed being encapsulated in 'fish eggs'. Perhaps after many seeds are distributed (Whore of Babylon, by plan? Temple Prostitution with a Purpose), one day Osiris will be regenerated in full form.

I find the 'missing parts' theme interesting also. The other day I read, once again, the story of the Horus/Set incident with the lettuce. Except this time, I saw details never seen/noticed before. [Brackets added.]

Lettuce and Kings: The Power Struggle Between Horus and Set by Morgan Jerkins

Now afterward, (at) evening time, bed was prepared for them, and they both lay down. But during the night, Set caused his phallus to become stiff and inserted it between Horus’s thighs. Then Horus placed his hands between his thighs and received Set’s semen. Horus went to tell his mother Isis: “Help me, Isis, my mother, come and see what Set has done to me.” And he opened his hand(s) and let her see Set’s semen. She let out a loud shriek, seized the copper (knife), cut off his hand(s) that were equivalent. [I suspect it's only one hand...and may reflect the many Bible verses of "My hand is stretched out still".] Then she fetched some fragrant ointment and applied it to Horus’s phallus. She caused it to become stiff and inserted it into a pot, and he caused his semen to flow down into it.

Isis at morning time went carrying the semen of Horus to the garden of Set and said to Set’s gardener: “What sort of vegetable is it that Set eats here in your company?” So the gardener told her: “He doesn’t eat any vegetable here in my company except lettuce.” And Isis added the semen of Horus onto it. Set returned according to his daily habit and ate the lettuce, which he regularly ate. Thereupon he became pregnant with the semen of Horus. [Does this have anything to do with the Bible verses that say men will one day travail as women?]

Towards the end of the story, both Horus and Set appear in front of Thoth, who was another deity known to handle godly disputes:

Said Set: “Let me be awarded the office of Ruler … for as to Horus, the one who is standing (trial), I have performed the labor of a male against him.”

In other words, Horus cannot be ruler of Egypt because he had been covered in sperm like a woman. Because Set has performed a “labor of a male against him,” Horus cannot rule over anyone. He had already been ruled.

Then Thoth, lord of script and scribe of truth for the Ennead, put his hand on Horus’s shoulder and said: “Come out, you semen of Set.”

And it answered him from the water in the interior of the marsh. Thoth put his hand on Set’s shoulder and said: “Come out, you semen of Horus.”

Then it said to him: “Where shall I come from?”

Thoth said to it: “Come out from his ear.”

Thereupon it said to him: “Is it from his ear that I should issue forth, seeing that I am divine seed?”

Then Thoth said to it: ”Come out from the top of his head.”

And it emerged as a golden solar disk upon Set’s head. Set became exceeding furious and extended his hand(s) to seize the golden solar disk. Thoth took it away from him and placed it as a crown upon his (own) head […]

And so Set took a great oath by [the] god as follows: “He shall not be awarded the office.”

What struck me about this incident is that it is the best origin for the Tree of Knowledge of Good and Evil I've ever seen. Horus' hand is the tree that produces both types of seed - His/good and Set's/evil, a blended fruit. Of course, the only way it works is if Isis took some of Horus' seed and placed it together with Set's in the sullied hand of Horus before tossing into the marsh.

Not the answer you're looking for? Browse other questions tagged egyptian osiris resurrection or ask your own question.