Why did mankind rebel against Ra?

The Book of the Heavenly Cow revolves around mankind's rebellion against Ra:

The central theme of The Book of the Heavenly Cow is mankind's rebellion against the elder sun god, Re, resulting in the punishment of humans by the fiery "eye" of Re in the form of the goddess Hathor. It takes place after Re's long rule on earth. The first part places considerable emphasis on the royal role of the sun god, who bears the royal title and who's name is surrounded by a cartouche. He is specifically given rulership over both the deities and the humans.

Prior to the rebellion, which required a complete reordering of the world, there had been a golden age where the various deities and humans were both under the sovereignty of the sun god. During this previous age, the sun god had not yet begun his daily course through the sky and the netherworld. Hence, there was no cycle of day and night, nor was there a netherworld and death did not exist.

Source: The Book of the Heavenly (Celestial) Cow, by Roland Mastaff. Tour Egypt.

Do we know the reason behind the rebellion? What compelled mankind to rise against Ra?

The interpretation I have found in general usage is that Ra had grown visibly old, which was suspicious to the human race, who did not even know what death was (as hinted at in your Roland Mastaff quote). Based on this, humankind had lost confidence in Ra's fitness to reign, and essentially they were staging a coup d'état. The whole business is dealt with very tersely in the cursory prelude with which the Book of the Heavenly Cow starts off:

Once it came to pass, under the Majesty of Ra, who brought himself into being, that when he had been in the kingship over mankind and the gods combined, mankind proceeded to contrive a plot against the person of Ra now that His Majesty (Life! Prosperity! Health!) had grown old, his bones being of silver, his flesh of gold, and his hair of genuine lapis lazuli. His Majesty became aware of the plot being contrived against him by mankind.

In her 1988 book Egyptian Legends and Stories, M.V. Seton-Williams frames the incident in the context of humanity's refusal to continue supplying the god with due honours in the form of sacrifices. In the introduction to her own retelling of the story, she says (on p. 22)1 that:

In the beginning mankind was grateful to Re for the benefits that he had conferred upon them, and they worshipped him and supplied all the things necessary for his service. After a while, however, they became tired of doing this and claimed that Re had grown old, and had no need of further offerings, so supplies for the temples diminished.

Joshua J. Mark, in the "Book of the Heavenly Cow" article2 of the Ancient History Encyclopedia website, surmises that:

The story begins with humans plotting against Ra because he has grown old and they feel he can no longer manage the affairs of the world. Ra hears of their scheme to overthrow him and calls the other gods to council to ask their advice on how to proceed.

Roger Lancelyn Green's conclusion, per his 1970 book Tales of Ancient Egypt, is that Ra was indeed enfeebled by his age, so that "he could no longer rule well over the people of Egypt" (p. 4).3 He blends his rendition of the story into Ra's well-known role as the opponent of Apep [Apophis], going on (on the same page) to imply that part of humanity's motive was fear that the god was no longer capable of fighting this "Dragon of Evil who had grown out of the evil vapours in the darkness of the night and sought to devour all that was good and bright and kissed by the sun."

This is a spot of narrative harmonisation on Green's part, as his book is after all creative fiction targeted at children. In the actual Book of the Heavenly Cow source material, Apep is mentioned merely one in time, in passing, as having a soul that "is in the Eastern Mountain," as opposed to the soul of Ra, which "is in magic throughout the world."

An interesting vindication of humankind's position, if it is correct to conclude that the threatened coup was on account of the divine king's perceived weakness, is that Ra seems to confirm their suspicion, in a bit of an ironic twist in the end. In the aftermath of Sekhmet's rampage by which she nearly annihilates the human race, Ra complains to Nun of his heavy-heartedness, and, smitten with weariness and pain, he admits: "My limbs are feeble as in the First Time. I will not return until another (cycle) overtakes me."

The story then goes on to explain the origin of the Celestial Cow as the vehicle for Ra to basically escape his ungrateful subjects on earth and depart into the heavens. As Joshua J. Mark puts it, "There are, in fact, a number of etiological elements to the myth which explain a wide range of traditions from why maidservants brew beer to the creation of the afterlife of the Field of Reeds."

displays how the gods share power and tasks after the departure of the sun god. Shu becomes the support of the Heavenly Cow, separating the sky from the earth; Geb is now responsible, together with Osiris, for guarding the earth—in particular the mounds and the snakes that inhabit them. This scenario can be understood as a “spatial distribution” of power. Moreover, the installation of the god Thoth as both vizier and moon, substituting for the sun god in the sky each night, can refer additionally to a “temporal distribution” of power.

This text originates in the Amarna period, during which Pharaoh Akhenaten attempted to replace the traditional Egyptian pantheon with a single deity, the Aten (the sun disk). 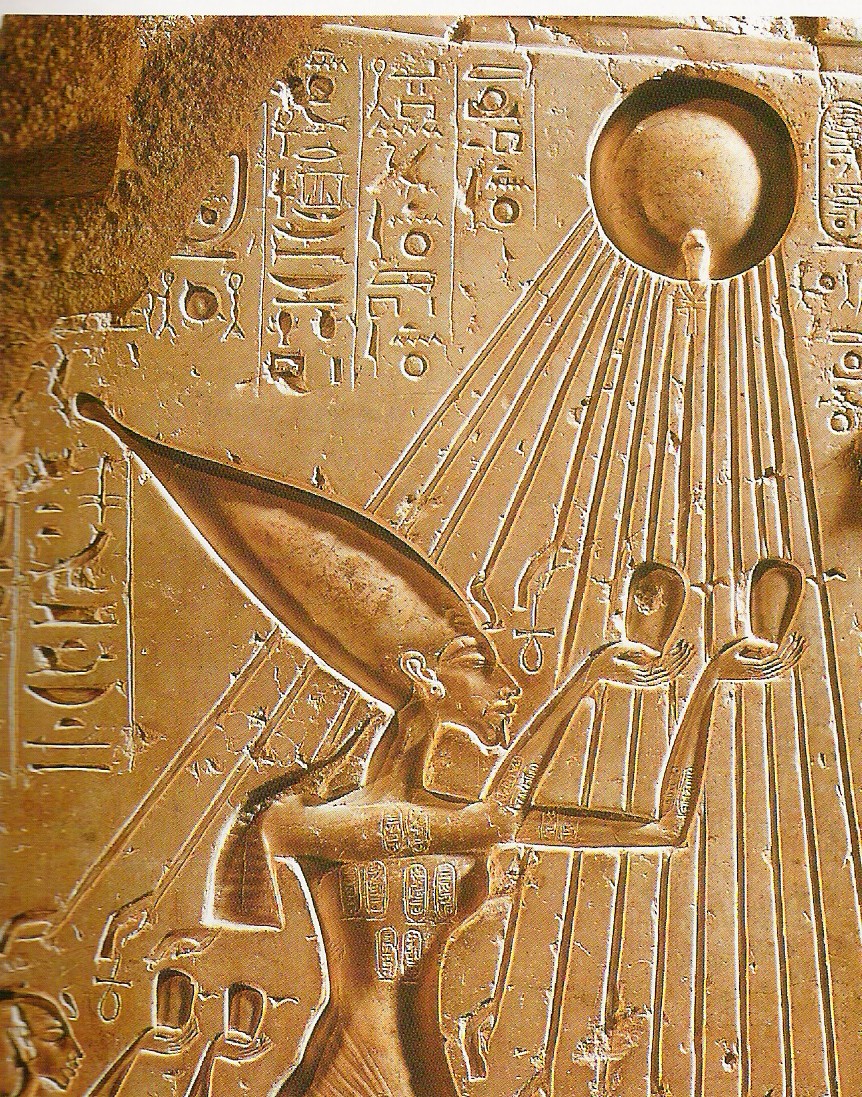 Note that the sun had been associated with the god Ra in traditional Egyptian religion up to and after the Amarna period. The priests of the traditional pantheon rebelled against Akhenaten. After his death, his successor, a boy-king who was originally named Tutankhaten, reinstated the old religion and changed his name to Tutankhamun. (Aten to Amun, since the Amun sect was the most powerful in Egypt before the Amarna period). His short reign ended the 18th dynasty.

It is no coincidence that this text originated during a period when the traditional religion of Egypt was repressed and replaced by another sun god. During the early 19th dynasty, the capitol city of Akhenaten was utterly destroyed and attempts were made to erase Akhenaten and his religion from history. It is therefore not surprising that in a rebellion against the new sun god Aten, at some point in the development of the text, the author(s) would have refused to even use the nomenclature of Aten, or would have associated the rebellion against the sun god as one against Ra in stead of Aten.

31
Why did Egyptian Gods have animal heads?
26
Why are cats so important in Ancient Egypt?
9
In ancient Egypt what did the Ba and the Ka represent?
3
Did ancient Egyptian gods have weapons like the Greek gods?
4
Why were baboons famous in Egypt?
11
Why are the “Fields of Reeds” the Egyptian paradise?
11
Why did Heracles transform into a fawn, during the gods flight to Egypt?
4
Why was Nekhbet depicted as a vulture?
9
How did Atenism explain night-time?
6
Did ancient Egypt use the abbreviation IHS for “Isis, Horus, and Seb”?