The Enchantress and the blue rose tree

Does anyone know the title of this story and where it was translated from? 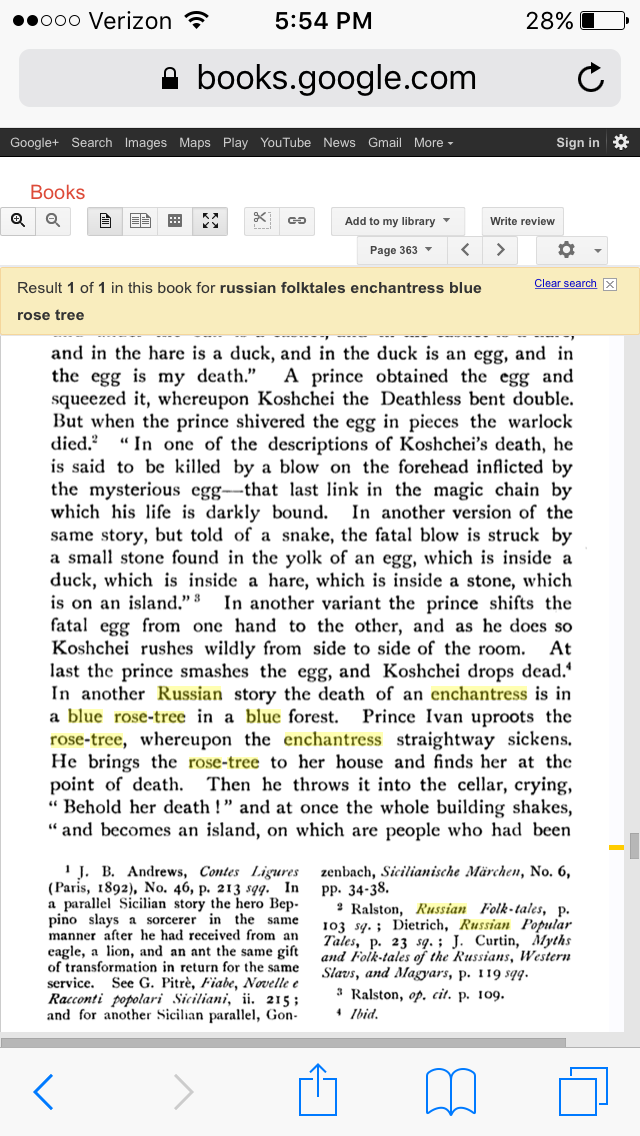 Sir James George Frazer cited this story from the 1873 book Russian Folk-Tales by William Ralston Shedden-Ralston. Ralston, in turn, translated it from Ivan Khudyakov's 1861 collection Russian Fairy Tales, where it was numbered 109. Clearly the story is Russian in origin.

Ralston did not give the story a title, which probably indicates that neither did Khudyakov (but I can't read Russian, so someone else would have to confirm this). Traditional folk tales rarely come with names, or rather, only one widely accepted name. Hence many fairy tale collections use numbering instead. So we could reasonably say, there isn't a title.

On the other hand, in his The Golden Bouch, Frazier gave the paragrap containing the story the subtitle, "Death in the blue-rose tree". You could treat this as a title - it's as close to a name as there is for this story, in English at least.

The name of the book is The Golden Bough: A Study in Magic and Religion, by Sir James George Frazer. The title of the chapter (number 66) is The External Soul. The name In Slavic Stories lets you know it takes place in the Slavic region. As for translation, I believe the story takes place in Russia.

6
What is a Planetnik?
16
Where was the World Tree located?
11
How did the gods in the Slavic pantheon relate to each other?
5
Is Baba Yaga always the antagonist, or sometimes the protagonist?
14
Does Baba Yaga ever desire the heart of Koschei the Deathless?
7
Do vegetation deities tend to be connected with the Moon?
8
In what ways did the Rus worship their gods?
9
Does Baba Yaga drink blue rose tea to reverse ageing?
2
How are domovye (domestic spirits) experienced in Russian flats (apartments)?
7
Link between mythological Czernobog and his hammer