What is the significance of the three stars in Ruben's Saturn painting?

What is the significance of the three stars in Peter Paul Ruben's Saturn devouring a Son painting?

I'm afraid the stars do not have mythological significance. According to the listing for the painting on the Prado Museum website, the stars are probably the planet Saturn, whose rings were believed to be satellites at the time:

The stars in the firmament above the cruel old man remind us that Saturn is also the name given, back in antiquity, to the sixth planet in the Solar System that is visible to the naked eye. However, this is an odd arrangement: beside the main gleam of light are two smaller stars whose presence is not quite clear. It is now known that Saturn is surrounded by a ring that can only be seen with a telescope. When Galileo Galilei discovered this phenomenon in 1610, he believed that the ring was two satellites positioned on either side. Was perhaps Rubens familiar with this interpretation? Certainly, the painter followed all the advances of his age with extreme interest; however, this hypothesis would have to be examined at length in order to be given serious consideration.

Painted in 1636, the three stars in the painting represent the planet Saturn as described by Galileo in 1610, a few years before. The central star is the planet itself, whilst the two others represent what he thought were two stars aligned with the planet. In reality, these were the rings around the planet, which his telescope was not powerful enough to distinguish.

Il Saggiatore by Galileo Galilei was written in 1623

If I'm correct, it portrays the conjunction of Saturn with Jupiter and Venus in the constellation Cancer and Rubens based his painting on Galileo's work.

Since planets were considered "stars" and "luminaries" in astrological parole, and portrayed as such in astronomical texts, there was no reason to portray the planetai otherwise. 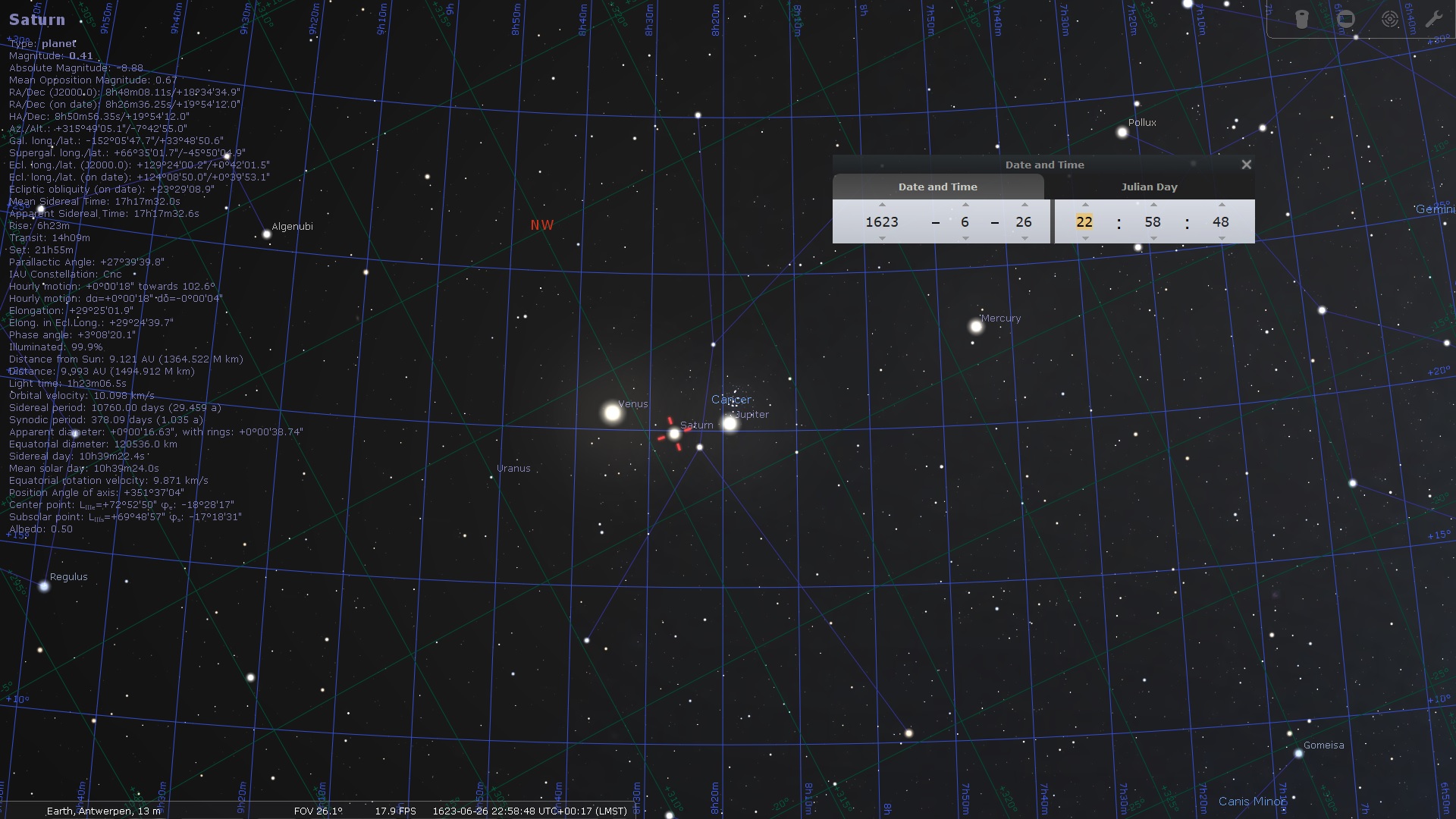 I hope this works for you, Thank you.

I think proponents of the Electric Universe theory would have something interesting to say about this whole business. They believe the Saturn was a star that entered Sun's heliosphere not so long ago (because it is required for humans to have the distant memory of it written in folklore and art, lets say 10-20k ago). They think Saturn was a red dwarf before it "collided" with the Sun, and because Sun's electric field was the stronger one, it overpowered the Saturn star, so it had to let its large satellites go (Earth, Venus and Mars) because it lost its potential (for them, the gravity depends not only on mass but on electric potential/charge of the object). For the longer time the humans on Earth could witness planetary chaos involving Saturn, Mars and Venus, until they settled in their current orbits. If somehow the EU interpretation on ancient art and folklore is right, Rubens might have depicted it in this painting, tho, highly unlikely :)

Not the answer you're looking for? Browse other questions tagged greek symbolism iconography or ask your own question.

9
What are the differences between the Greek Hestia and the Roman Vesta with regards to both mythology and worship?
5
What is the mythological significance/symbolism of oxen?
1
What is the 'White Rock' in Greek mythology?
5
Are forests and trees considered self sufficient and self reliant? Or is there any lore on caretakers of the forests?
8
What do we know of the rebellion against Zeus by Poseidon, Hera and Athena?
6
What happened to Pontus?
5
What is the significance of Medusa having hands of bronze?
6
What is the significance of the two cities on the Shield of Achilles?
1
Which specific ancient sources did NOT consider Kronus and Chronos to be the same being?