What is the meaning of this rune/symbol?

What is the meaning?

Here on the stone it was found: 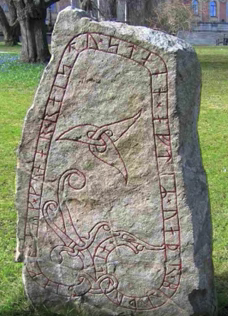 The symbol is a form of a the triquetra, a sort of loop with three "leaves". It's close in form to the triskelion, which is a sort of spiral with three symmetrical heads.

Those are just general names though. In norse paganism, you can sometimes see a relative to them known as the "valknut", consisting of three interlocking triangles (the triquetra is one continous loop, the triskelion has no interlocking). These likely have some sort of connection.

Now, the "valknut" is mostly known from depictions - even the name is a modern invention. Since it is not named in the primary sources, all attempts to connect it with any symbolism (particularly Odin) is little more than guessing, based on context. The name "valknut" is an outcome of this: "slain warriors-knot" certainly suggests Odin.

There is however, actually a mention of such a symbol in a primary source, unfortunately without saying what it is supposed to stand for. In chapter 17 of Skáldskaparmál in his Edda, Snorri describes exactly this kind of symbol. He is in the middle of a build up of the fight between Thor and the jötunn Hrungnir, when he says that:

Hrungnir had a heart which is notorious, of hard stone and spiked with three corners, after which the carving was fashioned, which men call Hrungnir's Heart.

It is somewhat odd that people would use a jötunn's heart as a symbol, evidently a mostly positive one. Perhaps it is one more of the glimmers that sometimes show up and gives a more positive image of the jötunn than the ones we mostly get of them as the adversaries of the Gods?

(The stone depicted above is one of four from Funbo, which was moved and placed near the Cathedral of Uppsala. The text is nothing remarkable, but the carving, made by the Runemaster Fot, is a good example of the Urnes style).

Not the answer you're looking for? Browse other questions tagged symbolism runes or ask your own question.