What do we know about the winged male figures representing the souls of warriors in the weighing of souls?

The pictured black-figured lekythos features Hermes (in his role as a psychopomp), weighing the souls of Achilles and a Trojan warrior (Memnon or Hector): 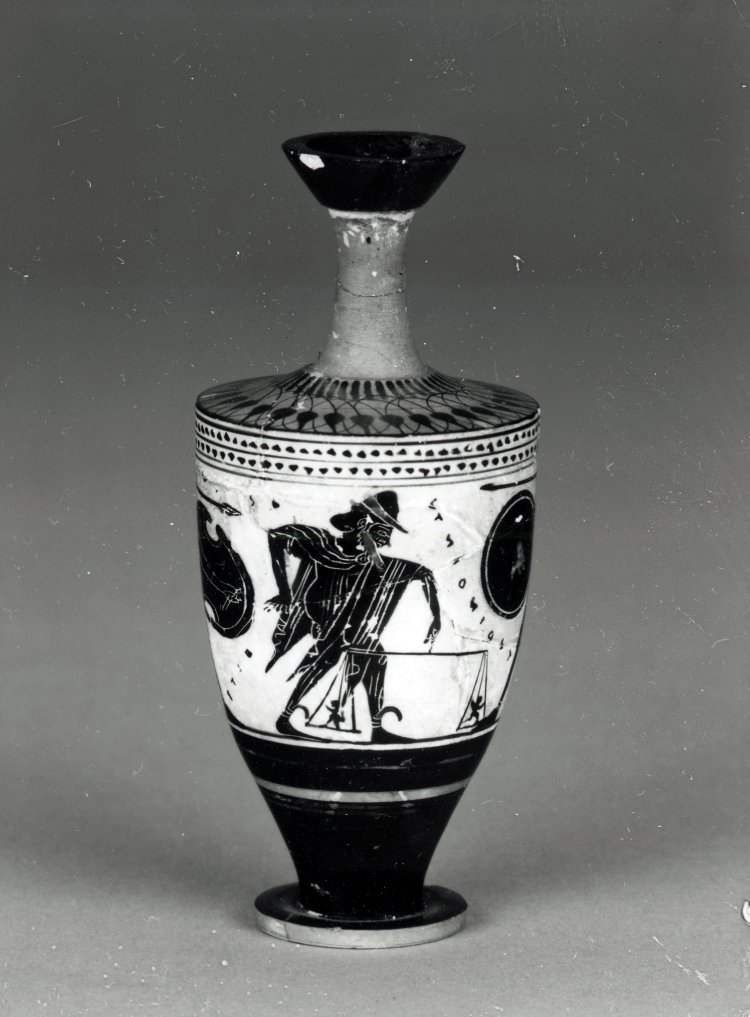 What I find particularly interesting in the scene is the two winged male figures on the scales. According to the British Museum's description of the lekythos, they represent the souls of heroes:

Pottery: black-figured lekythos: the Weighing of Souls. Design black on drab ground, with purple accessories. On the shoulder, lotus-buds; on the body, above, an ivy-wreath. Contest of Achilles and Memnon (or Hector): On either side is a warrior, bearded and fully armed, thrusting with spear, each having a short chiton with purple spots; the one on the left has a Boeotian shield, the other has the device of a crab (?). In the centre Hermes Pyschopompos to right, bearded, with petasos, short chiton and chlamys, both with purple spots, and endromides, holds out a pair of scales in left hand, each scale containing a small winged male figure, representing the souls of the two heroes. In the field, imitation inscriptions.

From what I understand, Keres would be the more obvious choice to symbolize the souls of the warriors in such a scene. However, all sources I know describe them as female, not male.

What are these figures then? Do they have names, and do they appear elsewhere in Greek mythology?

You are correct in thinking they are the Keres. I clicked on the Wikipedia page you linked and found Kerostasia/Psychostasia. That means, "weighing of the souls," a method of divine determination of fate. It was a persistent theme(?) in the Iliad. It states that while Achilles and Hector were fighting, Zeus hung up golden scales, set twin Keres(two fateful portions of death) in them and weighted their lives rather then the fates of the two. Hector's Ker was more, and thus, destined to die.

It might not have mattered if the Keres were used to represent male warriors as "two fateful portions of death." It is also stated in "Weighing of souls," ,"..."The Keres or φυχαί are represented as miniature men..."'

Because this is the only one I have found, I would say that this is the only instance in which they were used this way, but am hesitant to do so for a good chunk of mythology has been lost and/or diluted/changed over the millennia.

If they were in mythology lost, it would most likely be displayed in similar situations(major mortal wars). Possibly Seven Against Thebes, though I know the first two books(epics?) have been lost in trilogy.

8
What did Sisyphus know and when did he know it?
5
What is this myth about Helios?
5
Do we know what stories Boios collected in Ornithogonia?
6
Is it the Greek primordial deity Chaos male or female?
8
What is the significance of the three stars in Ruben's Saturn painting?
4
What do we know about Apollo Maleatas?
8
What do we know of the rebellion against Zeus by Poseidon, Hera and Athena?
4
What do we know of Perses, son of Helios and brother to Circe?
5
What symbol is on the staff of The Sorceress by Georges Merle?
6
What is the significance of the two cities on the Shield of Achilles?