What is the relationship between werewolves and vampires in Balkan folklore?

In Balkan folklore, several words that originally meant werewolf (e.g. the Bulgarian vǎrkolak and the Serbian vulkodlak) either ended up being used for both creatures or for vampires alone (e.g the Greek word vrykolakas, a derivative of vǎrkolak). This - to me - suggests that the concept of the vampire is strongly related to and possibly derives from the concept of the werewolf.

Is that true? And if so, how did the transition from werewolves to vampires happen? Was it straightforward or was there an intermediate creature that combined characteristics from both species?

The reason the same term was end up using for two creatures, which were very different, was because they were connected. But not in a sense of family ties.

source: pg 800, The Vampire Book: The Encyclopedia of the Undead, J. Gordon Melton

The reason to be believe so was because, the Slavs and Balkans believed that vampire was a stage that came after the werewolf. 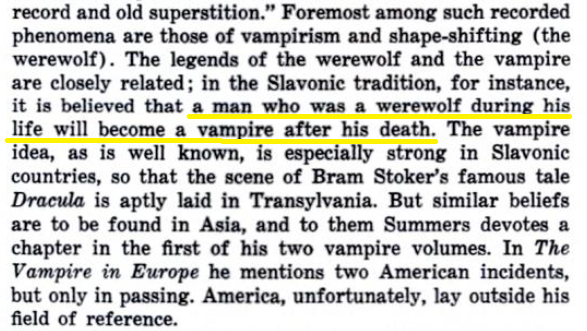 Since the vampires were creatures that were werewolves before their death, it is natural for the terms to be connected.

Another myth from the same region:

those who had eaten the flesh of a sheep killed by a wolf might become vampires after death.

In both cases, the transition to a vampire comes after the event related with the wolf. Hence the base of the term is connected with the werewolf.

Note: As for the transition in appearance and characteristics, I'm still researching on it and can't seem to find the appearance descriptions (no two sources say the same). Other answers are welcome :D

Not the answer you're looking for? Browse other questions tagged vampires werewolves folklore or ask your own question.

17
Origin of the 'vampires have no reflection' myth
8
Are vampires called anything else in European folklore?
16
Is there a connection between the use of the metaphor "black dog" for depression and the black dog of British folklore?
10
Why can't vampires walk in the sun?
7
What's the origin of “vampires must be invited”?
0
What is the earliest known appearance of a hero's greatgrandparent in folklore?
6
What is the difference between a phantom and a ghost?
5
What are the supernatural properties of gold in mythology and folklore?
4
Are vampires vulnerable to crucifixes because of the crucifixion of Jesus?