What is the meaning of the apparently runic symbol carved on (former Nazi agriculture minister and SS officer) Walther Darré's grave?

What is the meaning of this apparently runic symbol carved on the grave of Walther Darré, the former Nazi agriculture minister and high-ranking SS officer? Darré was found guilty on some of the charges made against him at Nuremburg, was released from jail in 1950, and died in 1953.

It looks like a compound rune. Two symbols used by the SS. But also a few more.

According to the chart, looks like D. Ger-Rune with F. Wolfsangel (variant) crossing over the middle line of the former rune, making the X mark. Then you would get the rune in the picture you shown. 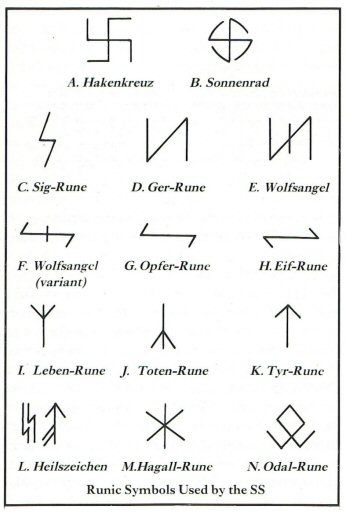 Walther Darré is a high ranking SS officer, so it would make sense with the Wolfsangel rune in there. Ger would also make sense, as an interpretation of it means "successful harvest," which would be a nod to his position as agricultural minister.

In addition, there is also a solar symbol in their as well, the circle with a cross (Sun Cross)... with the circle being a snake biting it's own tail (Ouroboros). Perhaps a nod to Jörmungandr, the giant serpent in Norse mythology. All enclosed in a Shield.

Seems like a symbol customized for Walther Darré, signifying his importance.

8
What is the meaning of this rune/symbol?