Who says Abraxas is a prince of hell?

I asked a previous question about Abraxas here, briefly talking about what he is and asking how the number 365 relates to him in so many ways.

A few days later, I was talking to someone who happened to look at my computer as I was researching. We had a conversation on what I had found out about him (her, by some sources). After I said my piece, she said Abraxas was also a prince of Hell. I've been trying to connect him since, but haven't found anything related or worth mentioning.

Where can I find information about Abraxas being a prince of Hell?

It was not uncommon for the Catholic Church to brand pagan deities as demons. To that effect, Abraxas is listed with several other pagan deities in J. Collin de Plancy's Dictionnaire Infernal (Infernal Dictionary). Here's an illustration from the 6th edition: 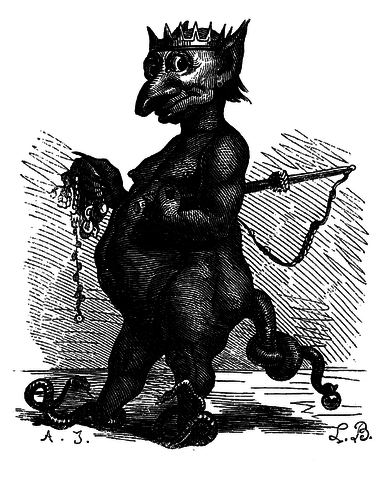 I have not found a source calling Abraxas a prince of Hell, specifically. If you allow a guess, I'll say that the characterization may at least partly derive from Abraxas's regal appearance in the above illustration (notice the crown?).

Not the answer you're looking for? Browse other questions tagged myth-identification comparative christianity or ask your own question.

33
Who did Adam and Eve's son Cain marry?
9
Who are those that Cain refers to in Chapter 4:14?
9
Which myth says that Eve wasn't the first wife of Adam, but Lilith?
6
Who/what is Lilith?
5
Why are Dido and Cleopatra in the second circle of Hell?
6
Where does it says that snakes can kill birds by looking at their shadow?
9
How does the Christian Hell come to be called Hell? Is it related to the Norse Hel?
6
Where does the idea that Satan rules hell come from?
0
Was Ulysses ever in a quest to save someone from hell?