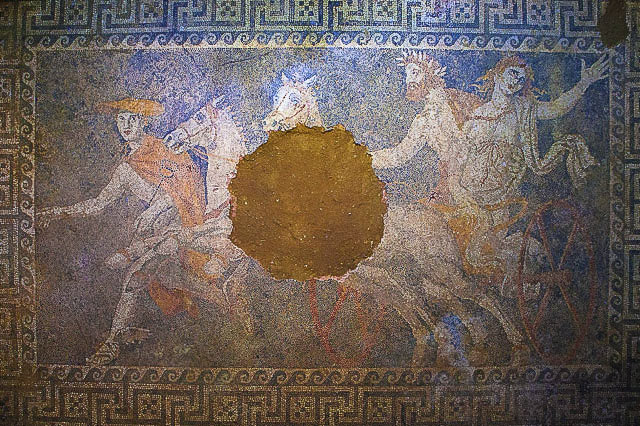 This is a mosaic depicting Hades abducting Persephone. Helping him, is Hermes. I do not recall a version of the myth in which Hermes helps Hades. Is there a version, or is this just an artist's interpretation of the myth?

I'm not aware of any version of the myth that has Hermes helping hades abduct Persephone, although I'm very happy to be corrected on this.

However, I want to suggest an alternative interpretation from the one provided. There is a known part of this myth where all three did travel by chariot: When they were on the way out of Hades domain after Zeus had sent Hermes to tell Hades to let her go.

"Making ready his chariot, Hades conveyed Persephone and Hermes back up through the earth until they arrived at Demeter's temple"

I know this isn't the usual interpretation given to this, I think due to the pose and expression of Persephone, but there are other possible interpretations of this. I found one version of the myth that says:

The crafty Hades learned this agreement and tricked his reluctant bride, who was crying all day and night from despair, to eat a few seeds of the pomegranate fruit. This was the food of the Underworld and every time someone ate even a few seeds of this, then, after a while, he would miss life in the Underworld. When the gathering in front of Zeus took place and Persephone was asked where she would like to live, she answered she wanted to live with her husband.

Which could be the source of the expressive longing on her face.

Not the answer you're looking for? Browse other questions tagged myth-identification hades hermes or ask your own question.

16
Why would Hades visit a battlefield?
14
Was Hermes originally mortal?
5
Are Krishna and Hermes related?
5
Who did Zeus punish by having poison/acid dripped on them?
3
Original Myth and translation of Hades asking to kidnap Persephone
5
Does anyone else sample the food of the Underworld?
7
What is the relationship between the term 'hermit' and the traditions around Hermes and Hermeticism?
4
Was Plutus the son of Pluto and Proserpina?
3
Hades and Pluto (Apollodorus)
3
In what ancient source, if any, does the infant Hermes disguise himself as Ares?