Do any other mythologies have a male god as the personification of the earth?

Much of this will depend on the language you are looking at. German has "die Erde" (the earth, feminine), "die Sonne" (the sun, feminine), "der Mond" (the moon, masculine), etc. Where the German article “der, die, das” (masculine, feminine, neuter) indicates that the word is masculine or feminine or neuter, in English they are all just “the.” I'm guessing that is why we speak of the "man in/on the moon" and not the "woman in/on the moon.” The gender in the language then leads to "Mother Earth” and The Man in the Moon.” The earth and sun are spoken of in the feminine, whereas the moon is spoken/written about in the masculine. The Italian (a later Sanskrit-related language as described below), “Luna” (moon), is a girl’s name in the Harry Potter books. I believe that in French and Spanish, “earth” is also feminine.

There is an interesting web page that also discusses the question: http://www.lionpath.net/zwoelf.html

(12) Why the Sun is Feminine and the Moon Masculine

”In many religions there are male sun gods, but they actually appeared quite late on the scene, when male priesthoods became dominant over the older priestesshoods of the Sun Goddess. They tried to downgrade the power of the feminine by assigning it to the Moon of lesser light, claiming the power and brightness of the Sun for themselves. That is why later Sanskrit-related languages (e.g. Latin, Greek, French, Italian and Portuguese), assign a masculine gender to the Sun and a feminine to the Moon. Whereas in older languages of the same Indo-European family (e.g. Sanskrit, German and old Goidelic) the Moon is masculine and the Sun feminine. Similarly, in the very ancient, pre-Babylonian Sumerian tongue, the word for moon is explicitly masculine, as it is in Arabic, in which the word for "sun" is feminine.”

In Ancient Egyptian mythology, Geb (male) is the earth and his sister Nut is the sky, held apart by their father Shu. 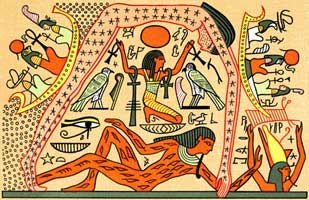 In Shinto mythology, the Japanese islands are "teamwork" of male and female, Izanagi and Izanami.

In Hinduism, a triumvirate consists of three male gods who are responsible for the creation, upkeep and destruction of the world: resp. Brahma, Vishnu and Shiva. 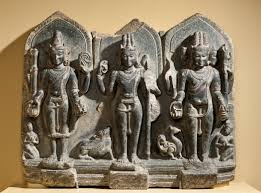 Many primal ~agricultural deities tended to be female.

By primal I mean more rudimentary natural life oriented concepts like plants, fertility, growing. This is in contrast to more sophisticated agricultural gods associated more with technological advancements and or harnessing of natural forces. The latter group tended to have higher populations of men.

One obvious biological difference between men and women is women's ability to bare and produce life. In the absence of scientific knowledge, it would be logical to associate life bringing natural aspects with feminine traits. Because it takes two copulate, is why male gods are not completely removed from agricultural deities. This cannot explain exactly the gender assignments of gods across societies because social traits very respective to the region tended to influence it heavily.

These guys are difficult but if you look at it with respect to their geography my point remains:

Anuket - Goddess of the Nile

Isis - Major Goddess of healing, there's also some pretty relevant tales in their too.

Tefnut - was the ancient Egyptian goddess of water and fertility.

Here is where my point may seem to break down at face value:

First thing to note is the Egyptians were a desert civilization where the majority of known land is dead, lifeless. Geb is also commonly associated with Earthquakes. This suggests that Geb is associated with a more crudely fundamental aspect of Earth like "all land". Since "all land" from their perspective is mostly dead its no wonder ,with respect to my point, that he is a man. Notice how the majority of "life oriented" aspects are represented by female goddesses. Notice how a lot of water oriented aspects also tended to represented by female gods. In a desert civilization water would be the obvious life bringing force and since it takes two it again is no wonder the earth is a man.

If you consider the many life bringing goddesses, if you think about Geb's depictions temporally, and you consider the possibility that Geb simply represents 'all land'; Geb isn't god of vegetation, vegetation is growing on Geb with the seasons. Since it is the water that is bringing life you could imagine the vegetation to be like kids climbing on daddy.

Then there is Hapi. Who is this confused god of birds, fishes, marshes and "river bringing vegetation". He is clearly semi associated with life bringing properties. He is always depicted with feminine features (breasts). In my opinion, one way to interpret his gender confusion is that it stems from the fact that he is bridging the divide between the feminine life bringing aquatic forces with the male land forces resulting in his gender confusion.

Now why this is relevant to the OPs question

When you ask about mother earth vs father earth, in what way do you mean mother earth? Most commonly mother earth is synonymous with mother nature again binding female reproduction with life oriented aspects. For instance to say "Mother Earth is dead" isnt to say the Earth no longer exists only that all life on it has ceased. Following the common meaning of mother earth then mother earth for the Egyptians would be someone like Anuket, Quetesh, or most likely Tefnut and not Geb.

Not the answer you're looking for? Browse other questions tagged comparative egyptian or ask your own question.

18
What was the more prominent of Ra's origins stories?
5
What would be an efficient data structure for cataloging deities?
16
Mythologies with goddesses as the main deity?
11
Why did Heracles transform into a fawn, during the gods flight to Egypt?
4
Why did mankind rebel against Ra?
3
Are there any older cases of exorcism in other mythology than the Abrahamic religions?