Does Angela Merkel's use of her distinctive "diamond" hand gesture have any folk-historical or other oral-traditional background?

Angela Merkel, chancellor of Germany, is known for using a distinctive hand gesture. 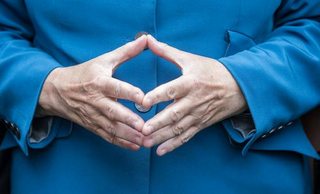 Does the Merkel rhombus (Merkel-Raute), which has been heavily used by the Christian Democratic party in its electoral campaigning, have any folk-historical or other oral-traditional background?

The following I found on Wikipedia:

Asked about how the Merkel-Raute was introduced as her trademark, Merkel stated that "there was always the question, what to do with your arms, and that's how it came about." She chose the gesture without having been assisted by a counsellor because "it contains a certain symmetry."

When used by her own party (the conservative Christian Democratic Union), the gesture is intended as a political symbol for Merkel's (presumed) unagitated leadership.

This would imply that there is no "meaning" to it, she simply decided that was how she liked keeping her hands and it was then taken on by others, since it is such an unusual gesture. The party uses it as stated above.

Its the satanic sign of domination; The diamond. It literally express the beholder perceive the audience as slaves.