What is an Half Angel Half Demon?

I read in a Solomon Grimoire that there was a species of Angels called Half Angels Half Demons. I haven't found any other information on them. Does anybody know?

The Grim Reaper is a possible candidate. He or She is more or less a “neutral” entity, who works for both God and the Devil. Doing his or her job. That’s the only creature (as far as I know) I can think of who could be considered as half way between an angel and a demon. This is thought of in the specific sense that neither an angel or demon can get away with the act of snatching a soul without incurring the wrath of either.

If you could tell us which grimoire it is we could search more specifically.

All in all angels and demons are opposites. According to some sources they are exactly the same but the daemons/demons are corrupted angels who went down with Lucifer in his rebellion against the Creator.

So putting these two entities together would be illogical.

I would really like a name or link to the grimoire and be proven wrong though. I have been searching some but have not found the specific mention. Given the right source I would be more than happy to search further.

"Technically" the offspring of angels and demons would be an angel, because demons were fallen angels. The nature of the fallen angels was due to choice rather than their essence, so to speak. This would be the technical answer based on mainstream Judeo-Christian theology.

This comes down to layers of history. Various grimoires, attributed to ancient figures like Solomon, were the product of combining fringe writings from Judaism and Christianity with late Hellenistic paganism, ideas from the Kabbalah and a lot of "artistic license". This started in Roman times, but ones like the one you're speaking of (likely some form of the "Key of Solomon") date from the 14th to 15th century. The Key of Solomon spawned numerous variations and copy-cats. From that perspective you could have dozens and dozens of variations of angelic and demonic mythology, each with different names for various concepts.

Nephilim - the offspring of the "sons of God" and the "daughters of men" before the Deluge, according to Genesis 6:1–4 of the Bible. 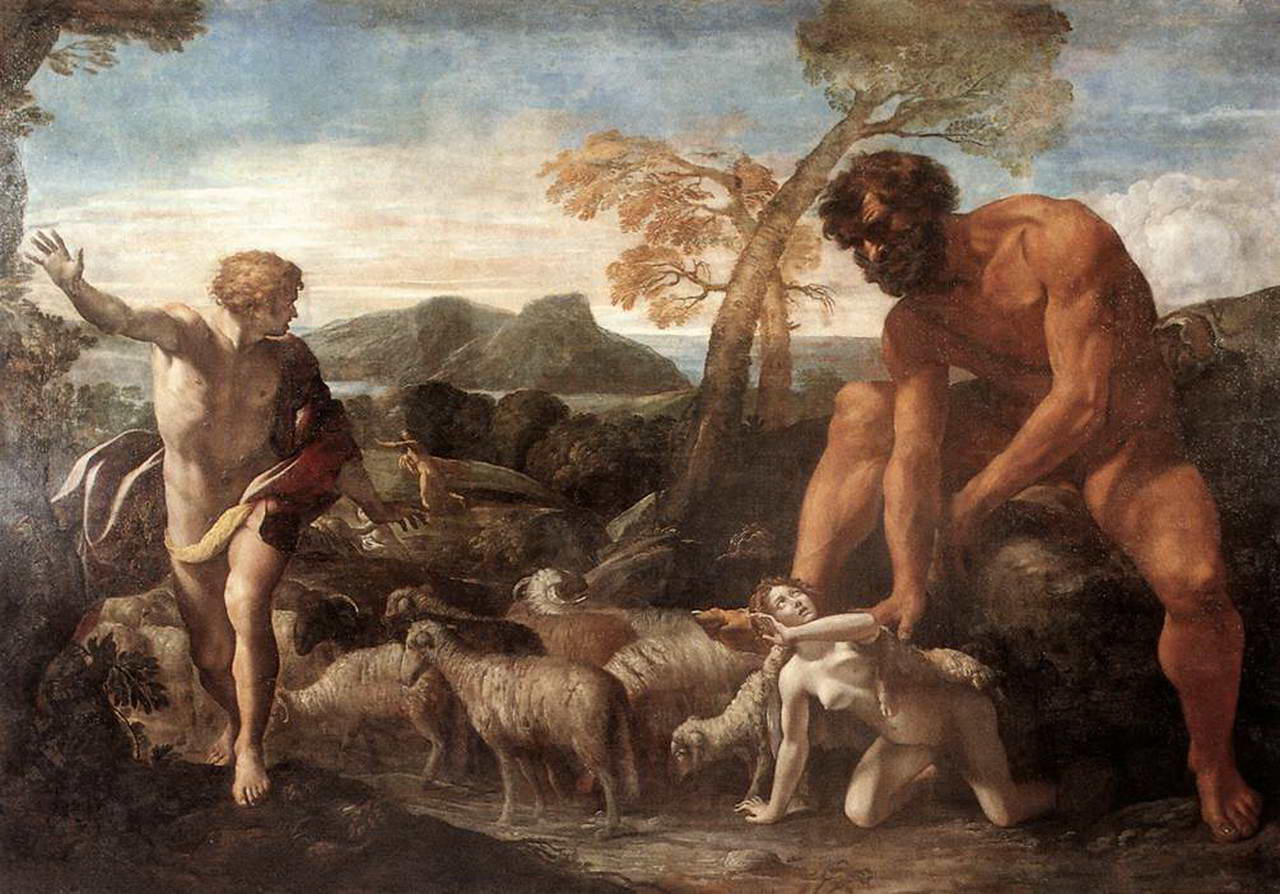 Both the concepts of angels and demons were "borrowed" by Judaism and Christianity from other mythologies, and then turned into an "angels good, demons bad" story.

I have already detailed the original texts from which the Christian concept of of angels was derived in another question, so I will not repeat it here.

Especially in Christianity, the demons become the cause of evil. However, daemon is the Latin word for the Ancient Greek word daimon (δαίμων: "god", "godlike", "power", "fate"). In Plato's Symposium, daemons are benevolent or benign nature spirits, beings of the same nature as both mortals and deities, similar to ghosts, chthonic heroes, spirit guides, forces of nature, or the deities themselves. In Hesiod's Theogony, the ills released by Pandora are deadly deities, keres, not daimones.

So from Ancient Greek mythology stems the concept that demons could be "half-demon", but not malicious. It's in early Christian writings this association with evil is first made. In the Old Testament, evil spirits appear in the book of Judges and in Kings by Hebrew names. But in Judaism, it is understood that God is the creator of all evil:

I form the light, and create darkness: I make peace, and create evil: I the LORD do all these [things]. - Isaiah 45:7

The word רָ֑ע rā‘ appears more than 600 times in the OT and always translates to "evil", "hurting", "bad", "wicked". Yet in modern Christian translations, this word is "toned down" to "disaster" or "calamity", because we associate those with natural events, and because God being the creator of evil doesn't sit well with the Christian image of its deity. You see this in even the earliest Christian writings.

In the Septuagint, made for the Greek-speaking Jews of Alexandria, the Greek ángelos (ἄγγελος "messenger") translates the Hebrew word mal'ak, while daimónion (δαιμόνιον; pl. daimónia (δαιμόνια)), which carries the meaning of a natural spirit that is less than divine (see supernatural), translates the Hebrew word shedim as well as the word se'irim in some verses and words for idols (foreign deities), and describes the being Asmodeus in the Book of Tobit. The use of daimōn in the New Testament's original Greek text caused the Greek word to be applied to the Judeo-Christian concept of an evil spirit by the early second century AD. This, the story of the fall of Lucifer, and the Greek concept of Hades (used to translate the Hebrew word Sheol) become front and center in the mythology of the origin of evil in Christianity. All these stories and concepts are borrowed from older stories and stripped of their original meaning.

Among critical scholars, the Lucifer mentioned in Isaiah and Daniel is not considered the same as Satan.

That thou hast taken up this simile Concerning the king of Babylon, and said, How hath the exactor ceased

The prophecy is therefore about the human king of Babylon, who is described as “Lucifer”, and verse 16 describes his fall:

Thy beholders look to thee, to thee they attend, Is this the man causing the earth to tremble, Shaking kingdoms?

So this clearly refers to a king like any other, verses 9-10 affirm this:

Sheol beneath hath been troubled at thee, To meet thy coming in, It is waking up for thee Rephaim, All chiefs ones of earth, It hath raised up from their thrones All kings of nations. All of them answer and say unto thee, Even thou hast become weak like us! Unto us thou hast become like!

The later association with the devil comes from the opening words of verse 9: sheol in Judaism is originally the place where all dead go. In later eras, it became the destination for the wicked and a place of punishment.

As to your specific question about hubris, we first need to identify to which king Isaiah is referring. “Lucifer” means “the morning star”, which is the brightest of the stars. In the parable, this star proudly decides to “ascend into heaven (which by the way contradicts the later association with Satan, who was cast out of heaven). This is described in verse 13:

And thou saidst in thy heart: the heavens I go up, Above stars of God I raise my throne, And I sit in the mount of meeting in the sides of the north.

Philologists associate this with Nebuchadnezzar, based on for example Daniel 4:22. Nebuchadnezzar proudly surveyed the great kingdom he had built up, thinking that he had conquered other nations in his own strength, rather than recognizing that the Abrahamic deity had bestowed this:

Thou it is, O king, for thou hast become great and mighty, and thy greatness hath become great, and hath reached to the heavens, and thy dominion to the end of the earth;

The association with the casting out of the devil comes from Jehova's punishment as described in Daniel 4:33, which references the king by name:

'In that hour the thing hath been fulfilled on Nebuchadnezzar, and from men he is driven, and the herb as oxen he eateth, and by the dew of the heavens his body is wet, till that his hair as eagles' hath become great, and his nails as birds.'

So Nebuchadnezzar's hubris is the cause for his downfall in the OT. The entire story is clearly about a king, not a fallen angel. The consensus among critical scholars is that the book of Daniel is historical fiction, later to be associated with the Christian concepts of Hell (which differ greatly from how the Greeks understood Hades), to personify evil in contrast to the "inconvenient" Isaiah 45:7 verse.

I guess it’s a hybrid of them both. It says they are called Nephilims, but that’s Angel and Human. Demons are not human, they are basically Fallen Angels.

So maybe the offspring would be a Fallen Angel as well? It’s really up to debate but the history of Angel Vs Demon is history, making it apparent they separate themselves as two complete different species. You can catagorise them as the same but are now two different beings.

So, since it’s almost unheard of such creation existing. It’s safe to say it’s a hybrid of them both and a chaos waiting to be unravelled. And it’s probably best that no one finds out what sort of creation it would be. Because it may dissolve our morals on what truly is good and what is evil.

I don't think angels and demons can procreate...if they possess humans for procreation, then it will probably have angel's grace and corrupted soul of demon , contained by a human body, if the woman really survives to deliver the baby.Since demons are fallen angels (all males), so their offsprings would be the antichrist (half human and half demon).

Not the answer you're looking for? Browse other questions tagged angels or ask your own question.

1
What would St. Michael be considered far as title/rank?

7
In Abrahamic religions, what is the origin of angels?
6
What do the abrahamic angels call God?
7
Are angels ever depicted fighting in Abrahamic religious texts?
5
According to Biblical account, why fallen angels' offspring are giants? Or are they egg-born?
7
What scripture describes humans as being morally superior to angels?
1
What would St. Michael be considered far as title/rank?