The story occurs in only two ancient writings: first in Hesiod's Theogony, where just a few tantalising details are offered towards your Question, and then only about 800 years after that, in Apollodorus' Library, wherein Hesiod's scant information is further truncated.

The only thing that the Library says about the potential son of Zeus and Metis (in 1.3.6) is that he "would gain the lordship of the sky", or, as James George Frazer translates it, he "should be the lord of heaven", which must mean that he would be some kind of sky-god, like Zeus and Ouranos [Uranus] before him, and that, like these predecessors of his, he would become the supreme deity.

Hesiod's first mention of him indicates that he would have something in common with his sister, because their mother's destiny was to give birth to "very wise children," first Athena and then him. Or in other words, going by Daryl Hine's 2005 translation, "All too intelligent children were destined to come out of Metis".

The Theogony then goes on to say that this son would be "of overbearing spirit", according to Hugh Gerard Evelyn-White's 1920 translation. In Hine's translation, he would be "of a reckless character, larger than life". And in the surviving manuscripts of Hesiod, that's apparently all there is to it.

... Or it would be if Evelyn-White hadn't used the work of Rudolf Peppmüller to restore a significant chunk of the next section of the Theogony (appearing in between Lines 929 & 930 in Evelyn-White's edition of the Greek). Evelyn-White seems to be saying (in a footnote on p. 146 of his translation) that this segment, missing from the main ancient text, Peppmüller was able to reconstruct from a quote that the physician Galen (100s AD) made of a quote by the philosopher Chrysippus (200s BC).

It is within this (salvaged) lacuna that the detailed story is narrated regarding Athena's birth from Zeus's head. It is also where we get the only other detail mentioned about Athena's unborn younger brother. Zeus swallowed Metis, it says,

for fear that she might bring forth something stronger than his thunderbolt...

That is really not much to go on, but the particular phrasing of how this statement is translated could point us in a slightly more interesting direction. In the online Encyclopedia article on Metis, on Theoi.com, we are told that Zeus devoured his wife

for fear that she might bring forth a thunderbolt stronger than his own...

This is ambiguous enough to mean that the son would be born bearing a thunderbolt as his weapon, in similarity to how his sister was born fully armed (and armoured), or, even more dramatically, that he himself would be a thunderbolt.

This is likely far-fetched but not completely unprecedented. (Note the strange example in Pindar, who says that gold itself [personified as a god named Khrysos, "Gold"] was a son of Zeus.) 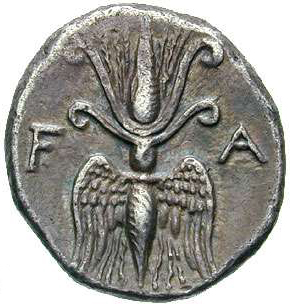 Here Cook says that Charles Theodore Seltman, who had dealt with this coin, described the winged thunderbolt depicted above as bearing a handle which takes "the shape of a small human head, perhaps Keraunos."

Keraunos, "Thunderbolt," which contains both thunder and lightning, was the divine king's signature armament as well as it was a title of Zeus in his capacity as the god of these weather phenomena. Places and persons that had been struck by lightning became sacred, as objects which had been touched by Zeus himself, as though this celestial electricity was itself a form of the god or merely an extension of him.

A better illustration of all of this appears literally in a Roman-era mosaic which I once saw some years back but sadly have not been able to recall its exact reference. (Therefore I am simply unable to verify the current paragraph beyond what it claims.) It may be a scene depicting the death of Helios' son Phaethon, who was zapped out of the sky by Zeus. At any rate, in the artwork, both Zeus himself and his thunderbolt are depicted. Zeus has just launched his weapon, which is portrayed as a young winged man named Keraunos.

If Metis's unborn son was going to be the personification of thunder and lightning, perhaps it was along these lines that he was envisioned. At any rate, that sliver of an idea from the recovered lines of the Theogony suggests that this son would have been a thunder-god as well.

And if the imagery employed to depict thunderbolts is something further to go on (and assuming that it is correct to think of this son as a thunderbolt avatar), then in addition to being "very wise" and "overbearing", he might have had wings and been composed partly of flames. 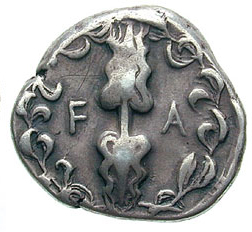 Here's another one of Seltman's coins upon which the thunderbolt appears as much more of a fiery icon.

(Which sort of happened anyway in Rome with Apollo;)

The key here is patriarchy, under which framework the ruler of Heaven could not be a woman—Athena could not supplant Zeus as a female. Thus transforming Metis' wisdom into a subordinate female vessel allowed it to be controlled, and Athena specifically works within the Olympian order, as subject to Zeus.

Athena is, in some sense, the ultimate "daddy's girl", having had no mother, which point Apollo makes in the Eumenidies [657 ff.] to dismiss the importance of mothers compared to fathers.

22
What did Danae want?
15
Looking for an obscure myth where Zeus kills one of Apollo's male lovers
7
Has Poseidon ever won a dispute with another Olympian?
9
Why did the Trojans believe Cassandra's recognition of Paris?
9
The repertoire of the Sphinx
1
When has Zeus shown wisdom?
8
Are there any instances of defying a prophecy?
20
Why is rape featured so prominently in Greek mythology?
8
What do we know of the rebellion against Zeus by Poseidon, Hera and Athena?
5
Is there a Greek myth where a father tries to protect his son, but the son dies anyway?