What r the religious beliefs associated with the early Indus valley civilization or Harrapan civilization?

[Note] My time for any answer is somehow so scarce that it will take me a couple of days and edits to manage to finish it... Sorry for this major inconvenience [/Note]

It is very rare to have questions related to the Indus valley civilization. Note that: Stack is about having answers from experts on a subject. While I doubt there is factually any experts frequenting this mythology section, which is sad, I would like first to mention my knowledge of the Indus valley is one of a "general voracious reader" and certainly not one of an expert.

The first we can look at are tombs, and this will be enlighting. At the time of the Indus valley civilization there are :

Now let's compare with the kind of tomb we find in the Indus valley, the comparison is stunning. This is a description given by Jonathan Mark Kenoyer: Precious metals, gold and valuable stone beads were generally kept in circulation among the living, while only the most essential personal objects were buried with the dead: shell bangles, beads with eye designs, steatite disc beads and mirrors. As a whole, the burial customs further reinforce the importance of ornaments and public symbols to define social and ritual status among the living Basically let's translate that with this: In the Indus valley, they buried their dead with trinkets and trifles.

Comparing the Egyptians, the Mesopotamians and the Harappan burial rites is I hope enlighting enough. The population of the Indus valley is definitely not the one who will later build the Taj Mahal. We are not facing the stupendous tomb of Egypt or the thrilling slaughter of a whole court of Ur. Just dead buried with occasional trinkets (bangs and bead necklace, occasional potteries).

The second point that is interesting to investigate are palaces and temples. They define religion for temples and power for palaces, and sometimes the relationship between both.

Now... the comparison with the Indus Valley is also quite impressive. First, the Harappans are definitely fine builders, they built cities and extremely functional one. We even know that their general water work is on par with the much later Roman one. The Indus civilization was discovered with the city of Harappa (hence their name, Harappan) in 1924, by John Marshall and here is his description of brick working: "The bricks alone remain — myriads on myriads of them — but not one of them is moulded or chiselled or shaped in such wise as to give a hint of any architectural design. Nor do we get any help in this matter from drawings or reliefs or models of buildings among the minor antiquities." Let's translate Marshall: they are taking the time to build backed bricks which is time and resource consuming but the bricks are... not impressive in their final shape. The second point to notice is at this stage no palace, no temple has been unearthed. We still have on huge construction, the Great Bath of Moheno-jaro. 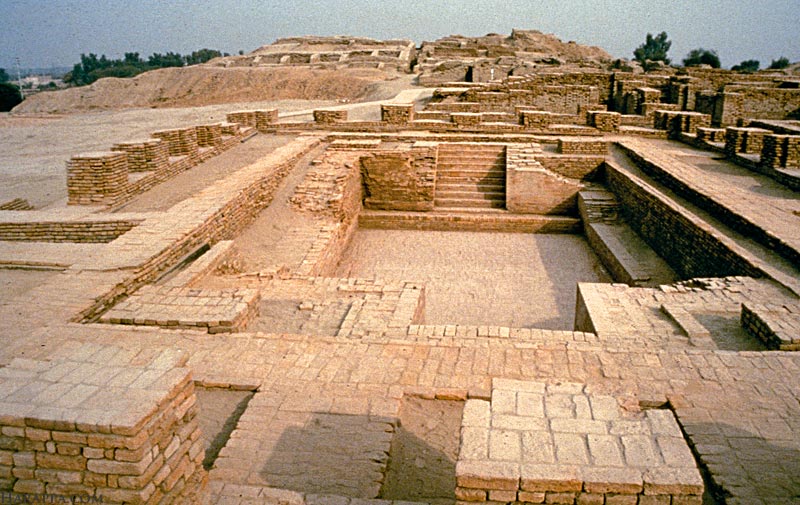 That is their best construction and while it is surely an impressive structure in size and craftsmanship, notice: no statue, no wall carving, no trace of any painting. Worst for us is we have no real clue of what the function of this building was exactly. Even Wikipedia is dancing on his foot on that matter"Most scholars agree that this tank would have been used for special religious functions where water was used to purify and renew the well being of the bathers." Notice the quote used, and the quote using "would have been". So the second place where we can find clues of the religion and cult practices of the Indus Valley is once again letting us down. At most are we amazed about the absence of any notorious cultic place. let's quote Marshall : "That is the impression produced by the wide expanse of bare red brick structures, devoid of any semblance of ornament and bearing in every feature the mark of stark utilitarianism"

Not the answer you're looking for? Browse other questions tagged india or ask your own question.

8
What is the original story of Fox Spirit/Nine tails fox in India's myths?
6
Are there any close analogues to the Fairy King & Queen Titania and Oberon, in Indian/Hindu mythology?
4
Do the myths of Malayalam Onam, Egyptian Osiris Myth and Vietnamese Tet show cultural contacts?